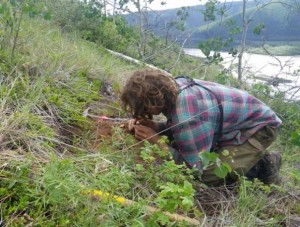 Vancouver, BC – October 22, 2012 – Comstock Metals Ltd. (TSX-V: CSL) announce additional new results from preliminary gold assays for drill holes QV12-003 and -004, recently completed on the VG Zone at its QV Project in the White Gold District, south of Dawson City, Yukon. In September of 2012, the Company completed eight drill holes at the VG Zone targeting gold mineralization discovered in trenches completed earlier in the summer.  The first two drill holes completed on the VG Zone, QV 12-001 and 002, intersected broad zones of gold mineralization down dip of the trenches (See previously announced drill results listed below and the company’s October 10, 2012 News Release).  The most recent drill results has further extended the limits of the gold mineralization down dip in hole QV12-004 and along strike in hole QV12-003; an updated cross-section is available at: http://www.comstock-metals.com/_resources/maps/2012_NR_Section.pdf

Drill holes QV12-001, -002, and -004 were collared from the same drill pad. Holes QV12-001 and -002 were drilled southeasterly at -500 and -800 respectively, such that the intervals reported are estimated to have true widths of 70 metres and 55 metres respectively.  Drill hole QV12-004 was drilled in the opposite direction, northwesterly at -500, such that the true widths are 65% of the reported intervals. Hole QV12-003 was collared approximately 50 metres northeast at -650.  A drill collar map and updated cross section are available at:

These new results show a strong increase in grades and widths down-dip, suggesting the depth potential of the VG Zone discovery is excellent. The high grades encountered in QV12-004 are consistent with the strong silicification, brecciation, and pyrite content noted by geologists familiar with the White Gold Camp. Also of note is step-out hole QV12-003, which confirms that the zone extends easterly. The reduced thickness encountered by this hole may be related to a minor fault offset.

The VG Zone is a new discovery in the White Gold District, just 10 kilometres from Kinross’s Golden Saddle Deposit. The geology of the VG Zone discovery is remarkably similar to Golden Saddle with the exception that mineralization dips at a shallow angle (30˚) beneath a low-rising hill. All eight holes at the VG Zone intersected thick zones of quartz-sericite-carbonate altered gneiss and feldspar porphyry dykes with quartz vein stockworks, breccias, disseminated and vein controlled pyrite, and visible gold.

“The (deformation) zone’s width and gold grade increase down-dip to the northwest. This will help us build tonnage quickly, once we start systematic drilling on the VG Zone,” commented the Company President & CEO, Rasool Mohammad. “Other targets identified to date with similar or stronger signatures as the VG Zone indicate that other zones similar to the VG zone can be found on the QV Project.”

The 2012 drilling programme at the VG Zone consisted of eight core holes totalling 1,334 metres.  Assays are pending for Drill holes QV12-005, -006, -007 and -008. The drill programme was designed to test gold mineralization found in trenches. The trenches completed to date have targeted a large area defined by high contrast gold and pathfinder element soil anomalies coincident with quartz vein float containing grains of visible gold. Concurrent with the recent drilling programme, field crews completed considerably more trenching and soil sampling on other targets at QV. It is expected that additional targets for further follow-up will result from this work.  Results of this large programme are still being received, compiled, and reviewed by field staff. Detailed maps of the property and exploration results as well as photographs may be found on the Company’s website at: www.comstock-metals.com.