Alan Carter, Cabral’s President and CEO commented, “Our RC drilling program at the MG gold-in-oxide blanket continues to surprise us by delivering results which suggest the gold-in-oxide blanket in unconsolidated material above the MG gold deposit at Cuiú Cuiú, is larger than we previously anticipated. The recent drilling has expanded the surface footprint of the gold mineralization in this blanket by 20% to 24 hectares and it is still open in almost every direction. These results continue to suggest the presence of a significant deposit in unconsolidated material which has resulted from the partial erosion of the underlying hard-rock MG gold deposit. With five drill rigs currently turning on site and an aggressive 30,000 meter drill program planned at Cuiú Cuiú for the coming months, we look forward to additional drill results from both the MG and Central gold deposits and a number of the other 43 mainly high-grade targets that occur outside the two known gold deposits.”

Following the discovery of an extensive gold-in-oxide blanket in near surface unconsolidated material directly above the MG gold deposit in April of this year (see press release dated April 15, 2021 and Figure 1), Cabral has moved swiftly to define the limits to the gold-in-oxide mineralization. 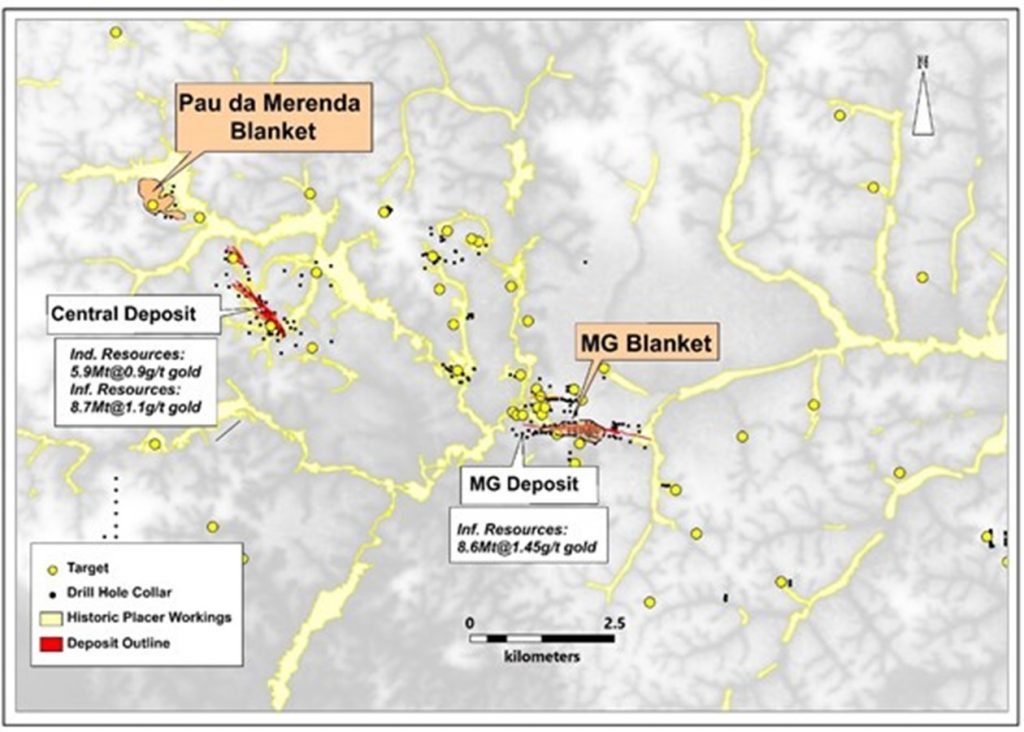 Figure 1: Map showing the location of the MG deposit and overlying MG gold-in-oxide target, as well as the Central gold deposit, the Pau de Merenda (PDM) gold-in-oxide blanket and other key targets within the Cuiú Cuiú district

Initially, a 74-hole RC program was planned to define this blanket but the program has now been expanded to a total of 86 holes including eight diamond drill holes. This is the result of recent encouraging drill results which suggest that the initial blanket is significantly more extensive than previously envisaged. Results have been reported so far on a total of 32 RC holes including 17 holes which are reported here.

Assay results have been returned on holes RC137 to RC139, RC150 to RC161 and RC195 and RC196 all of which were drilled in the central and eastern parts of the gold-in-oxide blanket (Figure 2). These holes returned intervals of gold-in oxide mineralization within the overlying unconsolidated soils and sediments.

The most significant intercepts from these holes are as follows:

On section 553745 (Figure 3), RC157 returned 66m @ 0.7 g/t gold from 1m depth including 6m @ 2.5 g/t gold from 51m depth. This result represents the second-best drill intercept returned to date within the blanket, and is close to the eastern limit of the blanket as it is currently known.

Approximately 55m further east, on section 553800, hole RC160 returned 23m @ 0.6 g/t gold from surface. This represents the most easterly hole drilled in the blanket to date and suggests that the blanket extends further east than previously anticipated whilst maintaining good grade and thickness. 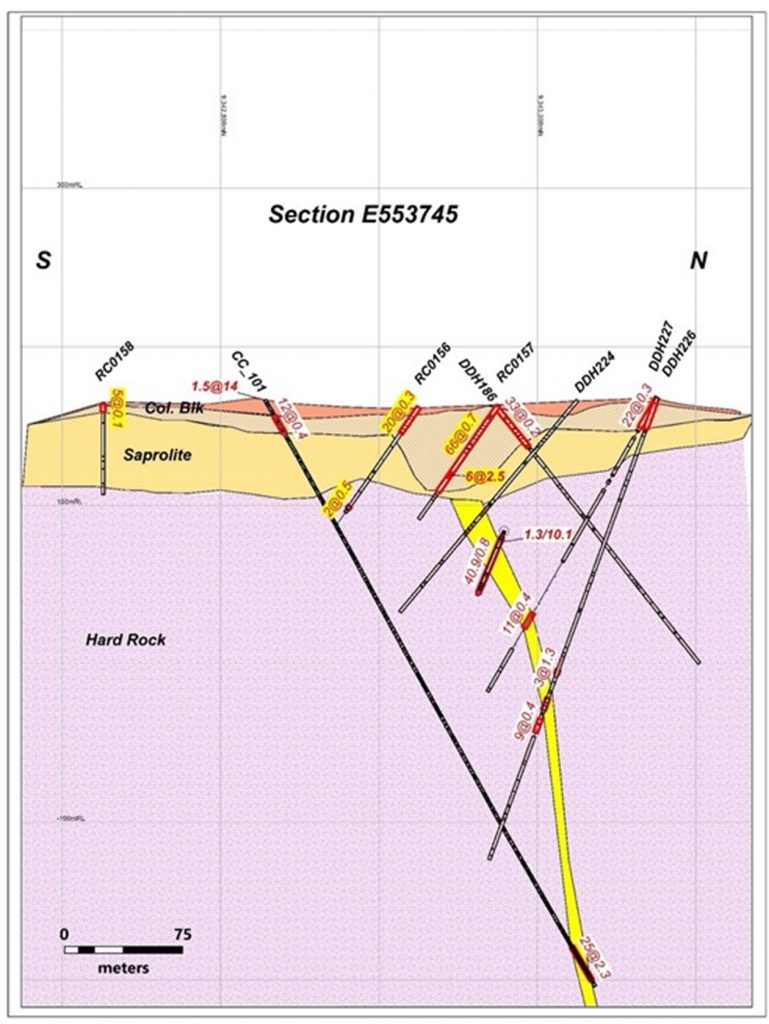 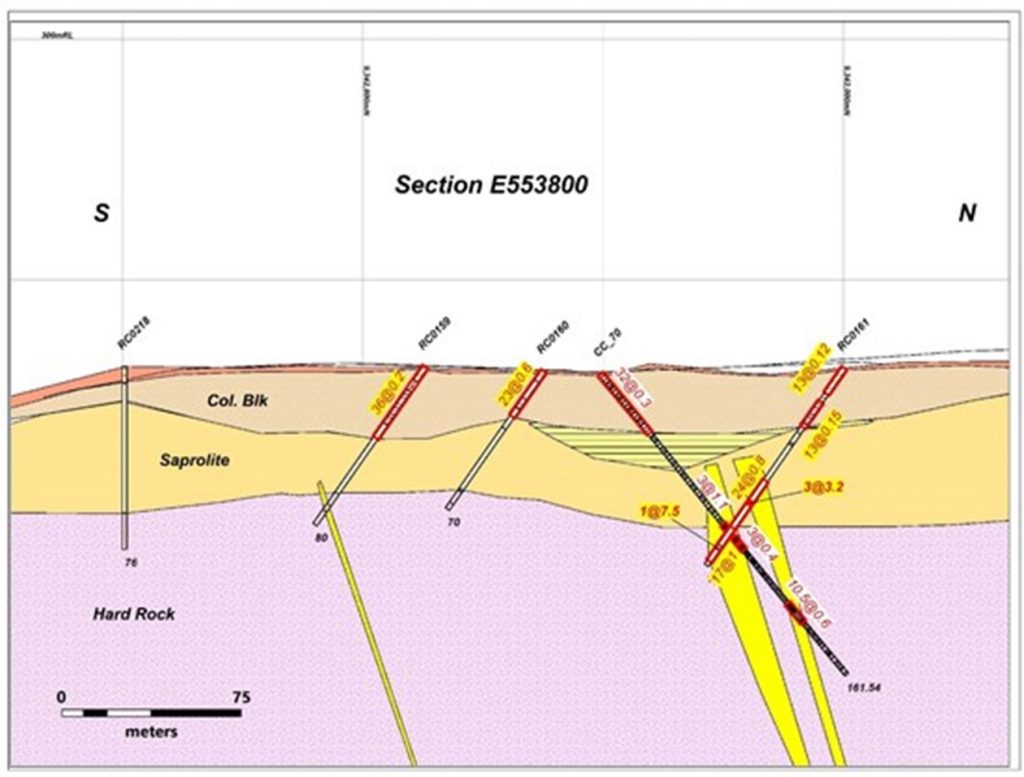 Results are pending on ten RC holes drilled to define the limits of the gold-in-oxide blanket at Pau de Merenda (PDM) where recent drilling returned 40m @ 2.2 g/t gold (see press releases dated August 10 and August 26, 2021). Results to date indicate the presence of a near surface blanket at least 300 x 800m in lateral size.

Results are also pending on three diamond-drill holes from a planned six holes at Pau de Merenda which are designed to test for the presence of a primary gold deposit in the basement intrusive rock underlying the gold-in-oxide blanket. Several historic drill holes suggest the presence of an underlying mineralized zone in the intrusive rocks with historic holes returning values of 30m @ 1.1 g/t gold, 47m @ 1.8 g/t gold and 9m @ 5.1 g/t gold.

Results are currently pending on five diamond drill holes and drilling is also in progress at the Alonso target which is located 3km SE of the MG gold deposit. Twenty-three samples of this boulder float material previously returned gold values of 11.6 to 200.3 g/t gold (see press release dated February 11, 2020).