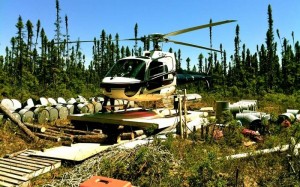 Balmoral Resources Ltd. (TSX:BAR)  (OTCQX:BALMF) announced that the first of three deep holes drilled this summer on its wholly owned Martiniere Property in Quebec has successfully extended the Bug North gold deposit to a vertical depth of approximately 550 vertical metres. This intercept, the deepest to date along the Bug Lake Gold Trend, increases the known vertical extent of the Bug North deposit by 140 metres (or 36%) and confirms that the deposit remains open down-plunge for further expansion.

“The first of the deep holes targeting the down-plunge extension of the Bug North deposit demonstrate the continuation of the gold mineralized system and high-grade gold mineralization to depths of at least 550 vertical metres, representing a significant expansion of the deposit and confirmation of our working model,” said Darin Wagner, President and CEO of Balmoral Resources. “With the successful expansion of the Bug North deposit to depth, the extension of the Trend to the southeast (see below) and the recent rapid growth of the Bug South deposit we have made significant strides forward in our evaluation and testing of this important new gold environment in the Detour region, and plan to continue with our expansion and delineation drill programs in early 2017.”

Drill hole MDE-16-230, the southeastern-most hole reported to date from the Southeast Zone of the Bug Lake Trend (see Figure 1), intersected a broad zone of gold mineralization (13.49 metres grading 1.27 g/t gold) with a high grade core (0.86 metres grading 16.60 g/t gold). Gold mineralization has now been intersected for approximately 700 metres along the southeast segment of the Trend and remains open along strike and to depth on all sections.

Holes MDE-16-229 and MDE-16-230 were stratigraphic holes which did not specifically target the Bug Lake Trend gold system. MDE-16-229 was drilled to examine the geology in the vicinity of the mid-swamp fault system. It intersected a broad zone of low grade gold mineralization which had not previously been detected. MDE-16-230 tested the stratigraphy south of the Lac du Doigt (Finger Lake) Fault in order to better constrain this structural corridor.

Results from an additional 42 drill holes completed on the Martiniere Property during the summer/fall program, and six holes completed on the Detour East Property, remain pending. These including numerous follow-up holes to the intercept of 115.45 metres grading 1.40 g/t gold (see NR16-19; Sept 7, 2016) from the Bug South deposit.

Drilling has now been suspended until after freeze-up. Logging and sampling of holes from the summer/fall program is expected to be completed within the next two weeks.

Balmoral is a well-funded, Canadian-based company actively delineating and expanding multiple targets along the Bug Lake Gold Trend on its wholly owned, 700 square kilometre Detour Trend Project in Quebec, Canada. The Project also hosts Balmoral’s Grasset Ni-Cu-Co-PGE deposit and numerous additional base metal occurrences. Employing an aggressive, drill focused exploration style in one of the world’s pre-eminent geological and mining jurisdictions, Balmoral is following an established formula with a goal of maximizing shareholder value through discovery and definition of high-grade, Canadian gold and base metal assets.