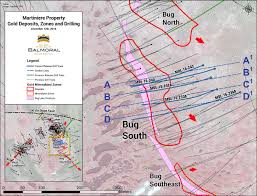 Balmoral Resources Ltd. (TSX BAR) (OTCQX:BALMF) today announced the discovery of a new near surface zone of high grade gold mineralization, the fourth new discovery from the summer/fall 2016 drill program, on its Martiniere Property in Quebec. The new discovery returned an intercept of 11.66 metres grading 6.25 g/t gold. This includes a higher grade core of 5.47 metres grading 12.48 g/t gold. The new discovery is located 250 to 300 metres east of the projection of the main Bug Lake Gold Trend in a largely untested area of the property (See Figure 1).

The Company also announced a number of new intercepts from the Bug Lower Steep gold deposit (see Table 2). These results are highlighted by intercepts of:

“This new discovery further broadens the footprint of the Martiniere gold system and opens up exciting new opportunities on the exploration/growth front proximal to the expanding deposits along the Bug Lake Gold Trend,” said Darin Wagner, President and CEO of Balmoral. “Along with continued strong results from the Bug South deposit (see NR 17-02; Jan. 23, 2017) and today’s positive results from the Bug Lower Steep deposit the scale and scope of the opportunity at Martiniere has taken some major steps forward over the last few months. We are excited to be rolling the drills back out imminently”.

* Reported drill intercepts are not true widths. At this time there is insufficient data with respect to the shape of the mineralization to calculate true orientations in space. All values presented uncapped.

Drill hole MDE-16-237 targeted the extension of the Bug Southeast gold zone. A new zone of breccia/vein hosted gold mineralization was intersected at a vertical depth of approximately 70 metres. MDE-16-237 did not intersect the Bug Lake porphyry suggesting that the porphyry, and associated gold mineralized trend, occurs west of the termination of the hole.

Follow-up testing of both new discoveries, and testing to the west of MDE-16-237 to intersect the main Bug Lake Gold Trend, are planned as part of the imminent winter drill program set to commence in the next 7 days.

* Reported drill intercepts are not true widths. At this time there is insufficient data with respect to the shape of the mineralization to calculate true orientations in space. All values presented uncapped.

Four holes tested the Bug Lower Steep gold deposit at vertical depths of between 150 and 300 metres and across 200 metres of down-plunge extent, successfully intersecting the deposit in all holes. As is typical of the northern portion of the trend, the most extensive gold mineralization is present along the western (“Lower”) margin of the Bug Lake porphyry.

Additional results from the fall drill program on the Martiniere Property, and on Balmoral’s Detour East Property, remain pending. Work on the winter road into the Martiniere camp has been slowed due to unusually warm winter conditions, however drilling is still expected to commence within the next 7 days.

Balmoral is a well-funded, Canadian-based company actively delineating and expanding a series of high-grade gold deposits on its Martiniere Property located within the prolific Abitibi greenstone belts in Quebec, Canada. The Martiniere Property is just one of several large, highly prospective properties comprising the Company’s wholly owned, 1,000 km2 Detour Gold Trend Project. Employing an aggressive, drill focused exploration style in one of the world’s preeminent mining jurisdictions, Balmoral is following an established formula with a goal of maximizing shareholder value through discovery and definition of high-grade, Canadian gold and base metal assets.