Pete Dougherty, President and CEO stated: “When we first began exploring for high-grade gold mineralization at depth at Magino, we quickly become aware of the structural control of the high-grade mineralization which led to the discovery of six distinct zones: Elbow, Central, Scotland, #42, Sandy and South.  Now that widely spaced drilling has discovered high-grade gold mineralization in each of these targets, we recently moved four drill rigs back to the Elbow Zone to begin more systematic early-stage resource definition drilling program and have been very pleased with both the continuity and grade profile of these results.”

Recent drilling at Magino has been primarily focused on tightening the drill spacing within the Elbow Zone on a pattern targeting 40m spacing in the upper 500m and 80m spacing between a vertical depth of 500m and 1,000m.  Infill drilling continues to encounter high-grade gold mineralization within a steep north-east plunging structure.  Visible gold is frequently observed in grey quartz veins hosted within the granodiorite intrusive along the northern contact of the volcanic rocks.

The Elbow Zone is interpreted to merge with the Central Zone at depth, as both zones follow structurally controlled contacts of either the granodiorite intrusive and the volcanic rocks (Elbow) or the granodiorite and aplite dykes (Central).  These two contact packages appear to be coming together at depth (see Figure 2).  Although not specifically targeted during this program, the Central Zone was intersected by two drill holes: MA21-085W1 (5.0m at 6.1 g/t Au) and MA21-087 (4.0m at 6.6 g/t Au).  Visible gold was observed in quartz veins in both of the drill holes that intercepted the Central Zone.  Potential strike extension exists moving west across a late diabase dyke where preliminary drilling intersected the Scotland Zone with discovery hole MA20-50A with 7.0m at 14.0 g/t Au, including 3.0m at 31.9 g/t Au (see press release dated November 23, 2020) at the northern granodiorite intrusive contact with the volcanic rocks.

Brian Arkell, Vice President of Exploration commented: “The early-stage resource definition drilling program continues to yield positive results with several high-grade gold intercepts at widths typically amenable to underground mining methods.  I’m also very encouraged by the continuity of the gold mineralization we are seeing within the Elbow Zone, and we are excited to continue to test this important target.”

The preparation of this press release was supervised and approved by Brian Arkell, Argonaut Gold’s Vice President Exploration and a Qualified Person under NI 43-101.  Mr. Arkell also reviewed the diamond drilling, sampling, and on-site sample preparation procedures at Magino.

For sample analysis, the Company utilizes a system of Quality Assurance/Quality Control that includes insertion and verification of standards, blanks, and duplicates consistent with industry standards.

The Company has implemented a QA/QC program to ensure sampling and analysis of all exploration work is conducted in accordance with the CIM Exploration Best Practices Guidelines.  The entire drill hole is sampled and tagged by geologic personnel.  Cores are then photographed and sawn in half by experienced geo-technicians, placed in numbered plastic bags, and gathered in rice bags which are sealed with tamper-proof security tags under the supervision of the project geologists.  The other half of the core is retained for future assay verification and/or metallurgical testing.  Other QA/QC procedures include the insertion of coarse blanks and Canadian Reference Standards for every tenth sample in the sample stream. Samples are bagged, sealed with numbered security tags and shipped to the Activation Laboratories facility, Thunder Bay, Ontario, for sample preparation and assaying.  The laboratory has its own QA/QC protocols, running standards, blanks, and duplicate samples in each batch stream.  Gold analysis is conducted by lead collection, fire assay with a gravimetric finish on a 50-gram sample. Metallic screen fire assaying is now completed using a 1.0 kg sample and two 50 gm fire assays of the pass (-100 mesh) pulverized material on all samples containing visible gold.  Check assays are conducted at a secondary ISO certified laboratory.

For further information on the Magino project, please see the report as listed below on the Company’s website or on www.sedar.com:

Argonaut Gold is a Canadian gold company engaged in exploration, mine development and production.  Its primary assets are the El Castillo mine and San Agustin mine, which together form the El Castillo Complex in Durango, Mexico, the La Colorada mine in Sonora, Mexico and the Florida Canyon mine in Nevada, USA.  The Company also holds the construction stage Magino project, the advanced exploration stage Cerro del Gallo project and several other exploration stage projects, all of which are located in North America. 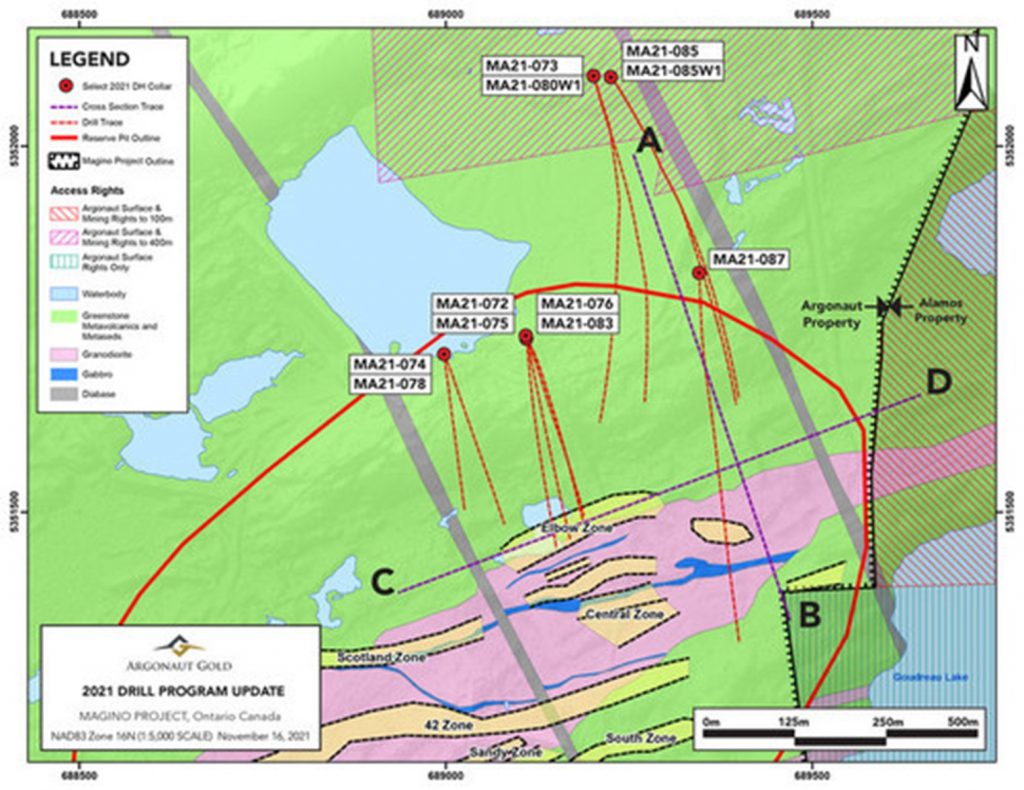 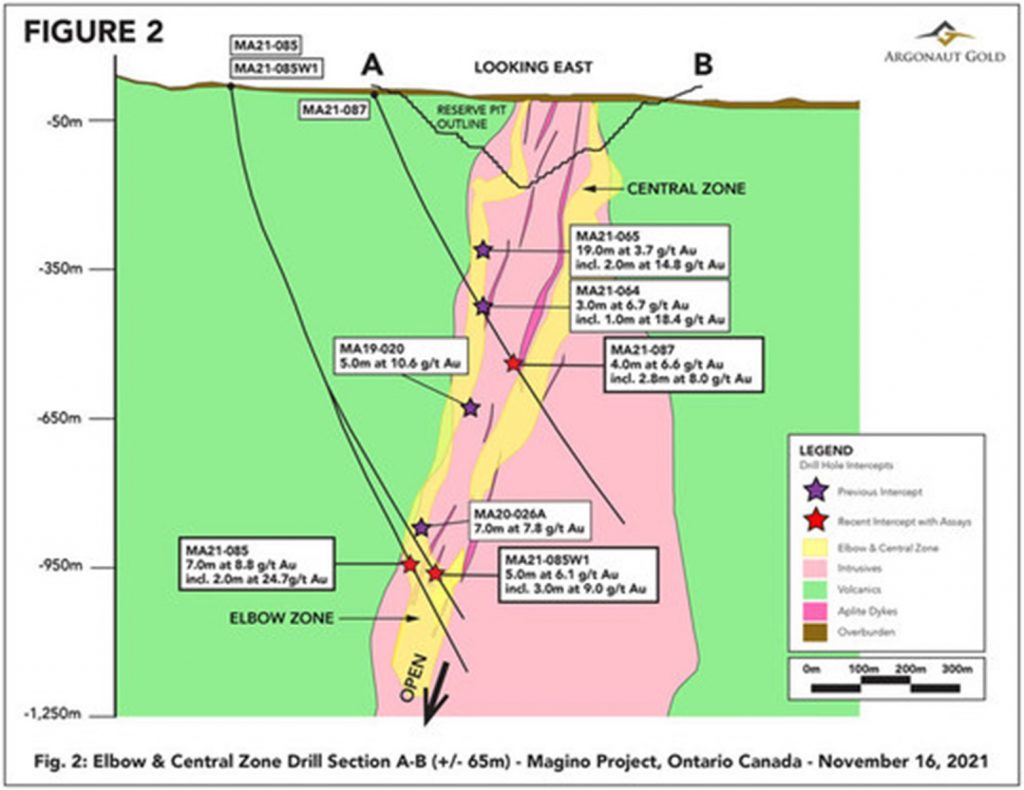 Figure 2 – Drill holes MA21-085, MA21-085W1 and MA21-087 in relation to previously announced high-grade gold intercepts from the Elbow and Central Zones and the interpreted merging of these two zones at depth. (CNW Group/Argonaut Gold Inc.) 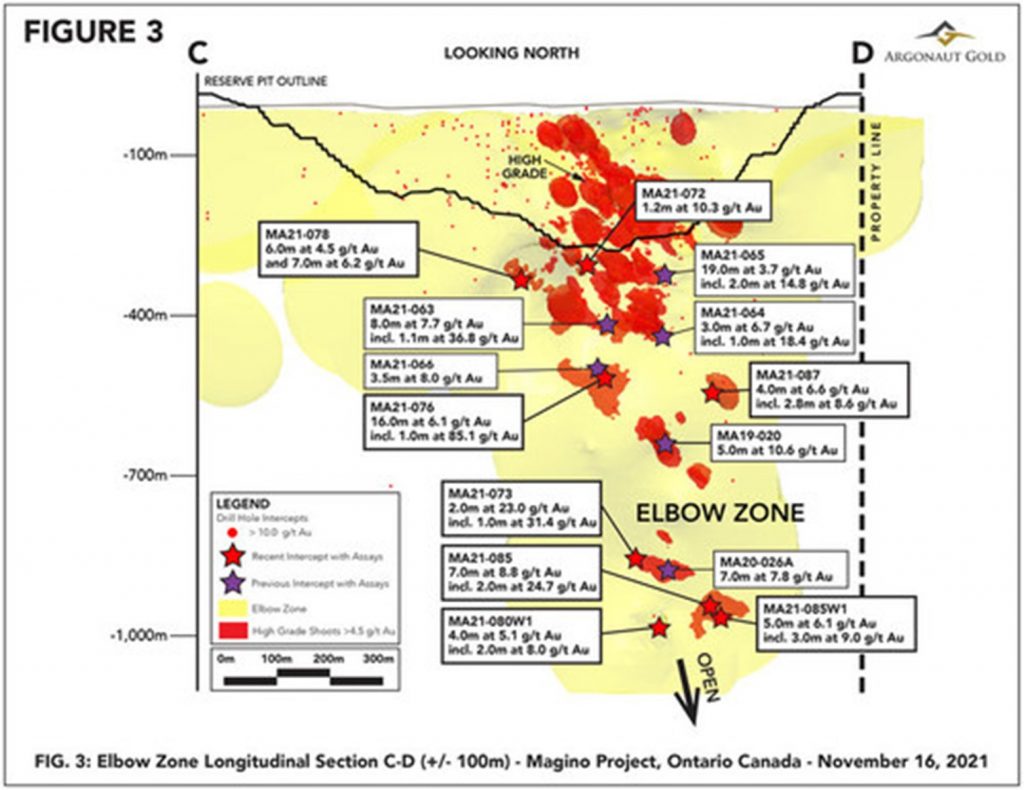