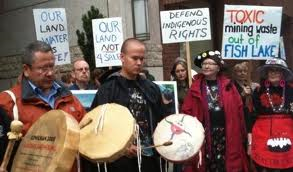 Today, the Association for Mineral Exploration British Columbia responds to the federal government’s decision announced February 26 by Environment Minister, Leona Aglukkaq, to not proceed with the New Prosperity copper-gold mine project near Williams Lake, BC.

“Members of AME BC believe that New Prosperity is a rare and special mineral deposit that can be responsibly and successfully developed,” stated Gavin C. Dirom, President & CEO of AME BC. “We are obviously very disappointed by this outcome. AME BC believes that this important mine project could be developed safely and could provide significant opportunities and net benefits to the local communities and neighbouring First Nations, to the Cariboo-Chilcotin region, and to all the citizens of British Columbia and Canada. Furthermore, we are concerned that this decision is primarily based on the recommendation of the independent Federal Review Panel, which may not have reviewed or included all of the best available scientific evidence in reaching its conclusions.”

The New Prosperity deposit, one of the largest of its kind in the world, contains an estimated 5.3 billion pounds of copper and 13.3 million ounces of gold. It is estimated that the project would provide over 20 years of economic development and nearly $10 billion in government revenues by creating 700 jobs during construction and 500 jobs throughout the mine’s operational period. The federal cabinet originally decided not to proceed with the Prosperity project in November 2010. In June 2011, following this decision, the proponent, Taseko Mines Limited, submitted a new proposal for the project where Taseko would commit an additional $300 million to protect Fish Lake along with adjacent fish habitat. It appears to AME BC that the Federal Review Panel used an incorrect model that predicted seepage from the New Prosperity tailings storage facility in its recommendation.

“Today’s decision represents a lost socio-economic opportunity for everyone in British Columbia and Canada,” remarked David McLelland, Chair of AME BC. “This project could provide family-supporting jobs in the Cariboo-Chilcotin region which has been hard hit by the mountain pine beetle epidemic. Unfortunately, this decision will also send a signal to the investment community, companies and people throughout British Columbia that the provincial and federal environmental assessment processes and decisions in Canada are still not harmonized.”

“While disappointed, members of AME BC remain committed to responsibly discovering and developing mineral and coal resources that will support socio-economic growth and minimize the impact on the natural environment,” continued McLelland. “It is important that all communities, including Aboriginal communities, play an active and constructive role in this process and that we move forward together to effectively and efficiently address the concerns that have been raised. Minister Leona Aglukkaq’s invitation to submit another application provides an important opportunity for this further discussion to take place.”

AME BC is the lead association for the mineral exploration and development industry based in British Columbia.  Established in 1912, AME BC represents, advocates, protects and promotes the interests of thousands of members who are engaged in mineral exploration and development in BC and throughout the world. AME BC encourages a safe, economically strong and environmentally responsible industry by providing clear initiatives, policies, events and tools to support its membership.