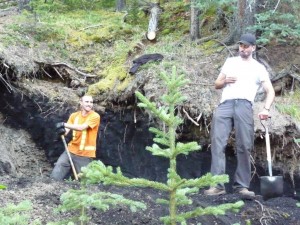 Altitude Resources Inc. (TSX VENTURE:ALI) announce that it has initiated permit applications with the Alberta Government for a drill program at its Palisades property located in west – central Alberta, Canada. The proposed program calls for the drilling of up to 7,000 metres. The drill targets in the proposed program were identified in the 2012 preliminary field assessment program carried out by Dahrouge Geological Consulting (Dahrouge) of Edmonton, Alberta. Dahrouge has been contracted to oversee the proposed 2013 drill program. It is anticipated that the approval will be received in the 2nd Quarter 2013 and the program is expected to start shortly after.

To view the map accompanying this press release please click on the following link: http://media3.marketwire.com/docs/0227ALI.pdf

Commenting on the upcoming program Andrew Wusaty, President and CEO said, “The planned 2013 drill program will verify historic results, test new coal targets identified in the 2012 field exploration and will provide more extensive coal quality analysis. The program results will be incorporated into an updated 43-101 resource report for Palisades which should be completed late this year.”

The drill program is targeting the Palisades Property which is located approximately 30 kilometres north of the Yellowhead Highway (Hwy 16) and adjacent to Highway 40 North, near Hinton, Alberta. Altitude’s properties are in close proximity to CN rail which services the Grande Cache mine to the northwest. Historical work in this area, reported as the “Hoff Property”, included drilling programs first by Rio Tinto Canada (1969) and then Denison Mines (1982-83). A National Instrument (NI) 43-101 study was carried out by Moose Mountain Technical Services in November 2011 on the original Palisades property. The initial 43-101 resource estimate completed in 2011 for the Palisades property by Moose Mountain Technical Services identified an inferred resource of approximately 12 million tonnes of low-volatile bituminous coal. Moose Mountain also identified an initial exploration target of approximately 140 million tonnes of low-volatile bituminous coal.

Gene Wusaty, Altitude’s Chairman, a qualified person as defined by NI 43-101, supervised the preparation of the technical information in this release.