Ximen Mining Corp. (TSX-V: XIM) (FRA: 1XMA) (OTCQB: XXMMF) announces that it has completed an initial review and target selection based on the VTEM geophysical survey of the Providence and Bud-Elk Properties, situated in the Greenwood Mining Camp in southeastern BC.

Ximen recently completed a review of the results from a helicopter VTEM survey flown over the Providence and Bud-Elk properties, located around the townsite of Greenwood in southeastern BC. The purpose of the survey was to identify magnetic and conductive features as targets for gold-copper mineralization.

Known mineralization in and around Ximen’s Greenwood properties includes 24 mineral BC Minfile database occurrences of which 15 are historic mines. Mineralization can be grouped into two styles: 1) copper-gold porphyry and related skarn deposits, and 2) silver deposits in polymetallic quartz veins. Copper-gold deposits occur in the west and are covered by the Bud-Elk property. Silver deposits occur in the east and are covered by The Providence group of claims. The mineral occurrences are indicated on the accompanying figures. 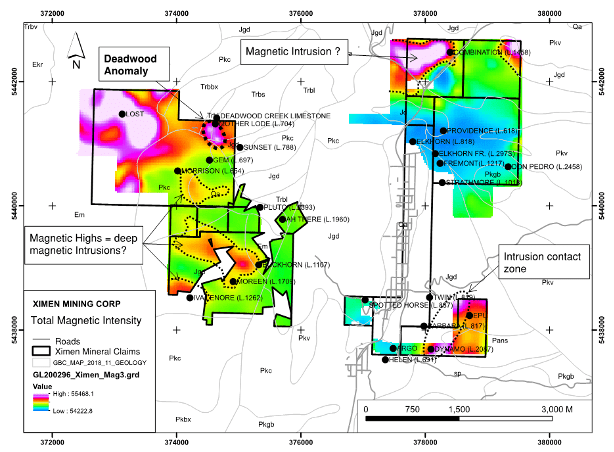 Magnetic and electromagnetic survey results were investigated considering the bedrock geology and distribution and styles of known mineral occurrences.

The total magnetic intensity results (image 2 below) show areas of very high magnetic response in the northwest, northeast and southeast.  The northwest zone correlates with the Eocene Marron volcanic rocks, which are characteristically highly magnetic but generally not mineralized.  In the very northeast corner of the claims, a high magnetic response correlates with a Jurassic intrusion.  Just west of this is another magnetic high that is mapped as underlain by chert of the Knob Hill Complex.  This area could also be underlain by a Jurassic intrusion that has not been recognized previously.  The Combination mineral occurrence lies on the margin of this magnetic anomaly.  In the southeast, a high magnetic response correlates in part with ultramafic rocks (serpentinite) and partly with Jurassic granodiorite.  The EPU and Dynamo polymetallic vein occurrences are associated with edges of the magnetic highs.

The Motherlode copper-gold skarn deposit is located on the edge of a magnetic high that extends about 220 meters southeast from the recorded position.  This anomaly is underlain by Brooklyn Formation limestone at the contact with unit Trbs (tuffaceous sandstone). 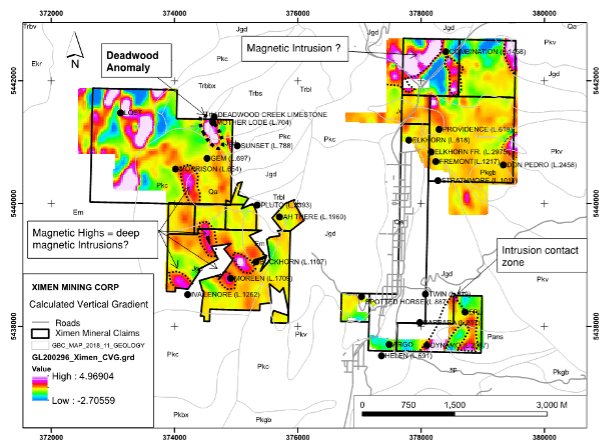 The Morrison, Buckhorn and Moreen copper-gold occurrences occur on the edges of areas of moderate magnetic intensity within the Knob Hill chert and Jurassic intrusions.   These areas may reflect more magnetic intrusive bodies at depth.

The Providence, Elkhorn, Elkhorn Fr., Freemont, Don Pedro, Spotted Horse and Argo silver bearing polymetallic vein occurrences are in areas of magnetic low response.  Possibly these areas were relatively distal and cooler with respect to nearby intrusions at the time of mineralization.

The Calculated Vertical Gradient magnetic map (image 3 below) shows variable pattern with many of the mineral occurrence located on the margins of areas of high gradient.  These areas may reflect the contact zones of relatively magnetic bodies.

The conductivity map (image 4 below) shows a large high anomaly in the northwest that correlates with the Eocene Marron volcanic rocks.  Another large high anomaly extends northwest from the Pluto and southeast to the Ah There copper-gold skarn occurrences.  This anomaly coincides with mapped Quaternary sedimentary cover but beneath this is likely the margin of a Jurassic intrusion.  The southeast margin of the intrusion is in contact with Brooklyn limestone at the Ah There skarn occurrence.  As such, this anomaly is an excellent target for additional skarn mineralization. 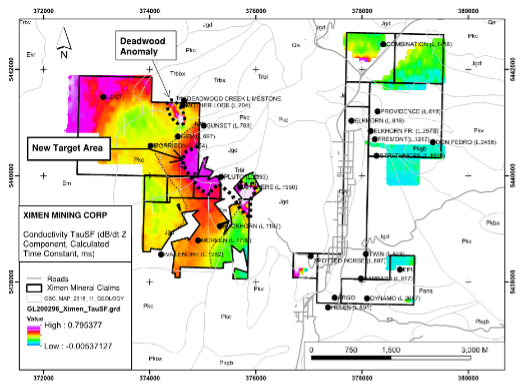 No results are available for the eastern part of the survey area around the Providence and Barbara occurrences due to interference from power lines.

Overall, the geophysical survey results correlate with the bedrock geology and new exploration targets are highlighted in specific areas for follow-up ground investigations.  The Company has an exploration permit in place at the Providence and Bud-Elk properties for drilling from a total of 24 drill sites.  Multiple holes can be drilled from each of the sites, so the current permits allow for a total of up to approximately 14,000 metres.

Technical disclosure in this news release has been approved by Dr. Mathew Ball, P.Geo., President of the Company and a Qualified Person as defined by National Instrument 43-101,