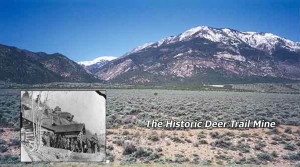 Western Pacific Resources Corp. (TSXV:WRP) is pleased to announce that it has closed the final tranche of its previously announced non-brokered private placement.  The two tranches of the financing total 6,670,001 units issued at $0.15 each, for total gross proceeds to the Company of $1,000,500.

Each unit consists of one common share and one warrant, each warrant entitling the holder to purchase one additional common share for 18 months from closing at $0.20.  The final tranche consists of 133,333 units at $0.15 each, for proceeds of $20,000.  The shares and warrants issued in the final tranche have a resale restriction until November 12, 2013.

The net proceeds of this financing will be used to advance the Company’s projects (principally the Deer Trail Mine, Piute County, Utah following closing of the acquisition) and for general working capital purposes.

Western is focused on advancing a strong portfolio of advanced-stage projects in the Western United States. Western’s team is led by technical and financial experts who aim to succeed in creating shareholder value.