Vizsla Silver Corp. (TSX-V: VZLA) (OTCQB: VIZSF) (Frankfurt: 0G3) is pleased to provide the results from the first four holes at the Josephine vein at the Panuco silver-gold project in Mexico. The vein was discovered parallel to the Napoleon vein using ground electromagnetics and remains open in all directions.

Vizsla President and CEO, Michael Konnert, commented: “The fact that we have confirmed successful electromagnetic targeting of the high-grade veins in the district, is ground-breaking for Vizsla and the Panuco district. This successful EM survey is a testament to the high-grade nature of the district which features massive to semi-massive sulphide mineralization which is typically uncommon in Mexican vein fields. We have been successful in drilling the very first EM target in the district resulting in a brand-new discovery of a potentially 1.7km long vein parallel to Napoleon, which may have otherwise remained undiscovered. This tool grows our discovery potential and gives us the ability to target high-grade, previously undiscovered veins in the district, growing the over 80 kms of cumulative vein extent.  In addition to this newly discovered zone, only 200m from Napoleon, we have commenced drilling multiple new untested EM targets identified from the trial survey.  Vizsla is drilling aggressively to define the Company’s maiden resource estimate and demonstrate that Panuco can host a globally significant silver resource.”

The Josephine vein was discovered during a trial fixed loop ground EM survey completed along the Napoleon Vein Corridor.  The vein runs subparallel, approximately 200m to the west of the Napoleon vein and was not known prior to the EM survey.

The vein is defined with three separated EM plate targets however the vein is likely to be a continuous vein over 1,700 metres of strike.  The separated targets either reflect zones of increased massive sulphide along the vein or more likely limitations in the survey design due to the overlap of the transmitter loop and receiver lines.

The vein mineralogy, textures and style of mineralization are very similar to the main Napoleon zone with multiple episodes of vein formation.  Quartz varies from massive, banded to brecciated and has white to grey coloured phases.  Mineralization varies from disseminated to massive and is composed of galena, sphalerite, argentite/acanthite and pyrite.  All three holes have subzones of massive sulphide believed to define the EM anomaly and in hole NP-21-132 this sub-interval contains very high grades of silver and gold (0.3m at 3,320g/t silver, 12.4g/t gold) with base metals (1.77% lead and 4.9% zinc).

The Company is presently drilling at the northern end of the Napoleon vein corridor (1,540m along strike from the discovery holes) where the projected Josephine vein and Napoleon veins are close enough to intersect with a single hole (Figure 1). This drilling has successfully intersected both veins with the Josephine vein occurring within metres of the modelled EM plate target.  Drilling is ongoing and assays are pending.

Drilling has also commenced on combined EM and mapping targets in the La Colorada area, the northern portion of the Cinco Senores vein corridor (Figure 1).  The area is host to a historic resource within a flat-lying vein and EM anomalies have been defined to the north and south.  High grade samples have been returned from surface and, underground sampling of historic workings.  A new geological interpretation suggesting the northwest corridor as the dominant control on the flat-lying veins makes this area a very high priority target for the Company.

Table 1:           Downhole drill intersections from holes completed at the Josephine Zone on the Napoleon Vein Corridor.  Hole numbers are non-sequential due to additional drilling along the vein corridor; every hole with assays received has been reported.

The Company would like to announce that it has granted a total 220,000 options to an officer at a strike price of $2.44.  They are exercisable for a period of five years and they will vest over the next two years.  They are subject to the policies of the TSX Venture Exchange. 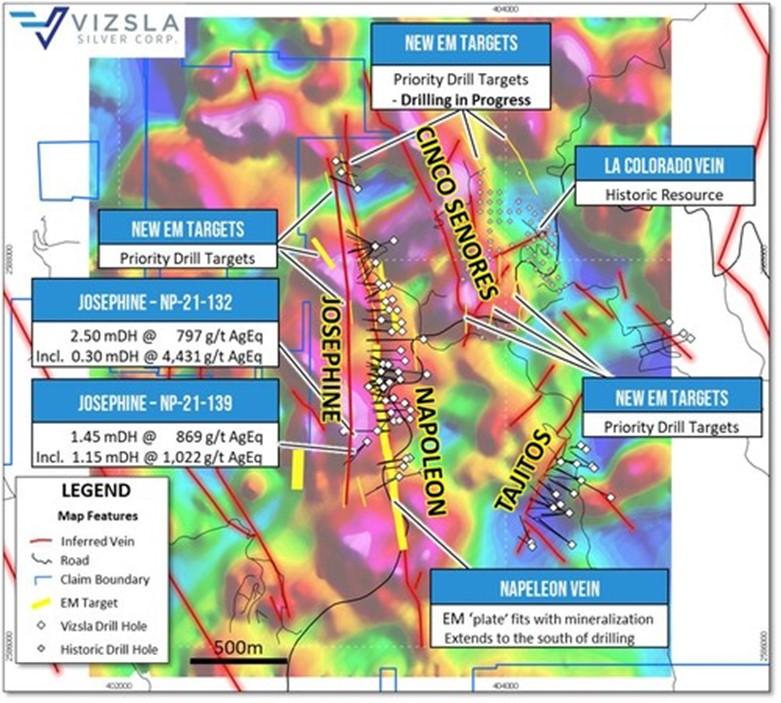 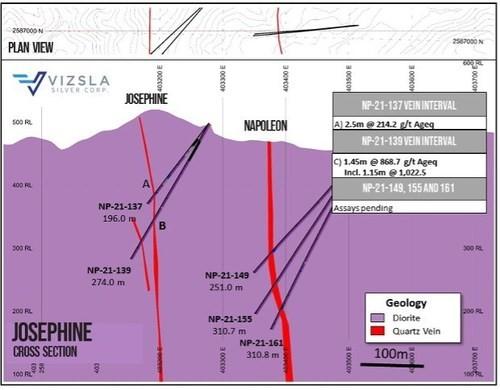