Vizsla Resources Corp. (TSX-V: VZLA) (OTCQB: VIZSF) (Frankfurt: 0G3) is pleased to provide results from eight new holes at the Papayo prospect at the Panuco silver-gold project  in Mexico.  These results extend the Papayo zone over 120 metres to the south where it remains open.

Vizsla President and CEO, Michael Konnert, commented: “Papayo now extends over 240 meters of strike with two parallel veins containing mineralization and remains open.  It is located approximately 1km north of the Napoleon discovery and is one of a number of targets along the vein corridor.  Based on these two successes, the Company has commenced a systematic 100m spaced program to test the entire 2.7km length of the corridor to find new zones and define the total endowment of the Napoleon Vein.”

Drilling at Papayo has defined a central zone with mineralization that is better developed in the hangingwall vein (defined by holes NP-20-21, NP-20-28 and NP-20-36).  Stepping to south, drilling has intersected another better developed zone of mineralization around hole NP-20-50 that is open for expansion with higher grades in both the hangingwall and footwall veins (Figure 2).

The broader Napoleon structure is hosted in weakly magnetic microdiorite and trends roughly north – south for over 2,700 m of strike.  The structure hosts two main quartz veins that are separated by 10 to 20m, and dips steeply to the east.  Between the two main veins are a series of smaller splay veins with variable orientations, that are related to opening along the structure under strike slip movement.  The two main veins have a variable true width of 0.4 to 15.3 m and are usually hosted next to the main fault structure, though occasionally also occur outside of the fault.

The two main veins are multi-episodal quartz veins, with sections of massive white to grey quartz as well as local brecciation with clasts of grey quartz, white vein quartz and/or wallrock fragments.  The grey quartz is discoloured due to the presence of very fine-grained argentite.  A later breccia cuts these earlier phases that is grey quartz supporting polymictic clasts of grey and white quartz along with strong chlorite and fine to medium grained pyrite, sphalerite and galena.  Other smaller quartz veins have been cut in both the hanging wall and footwall that appear to be splays with less continuity. 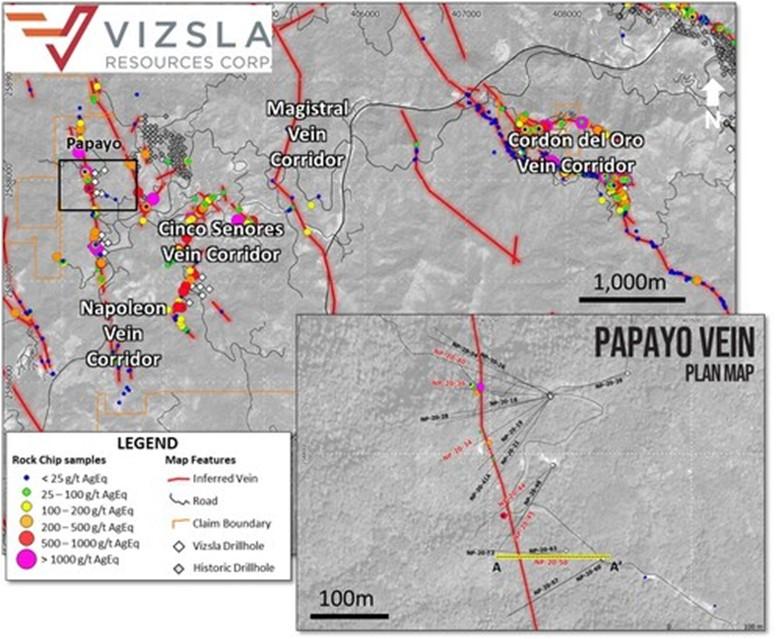 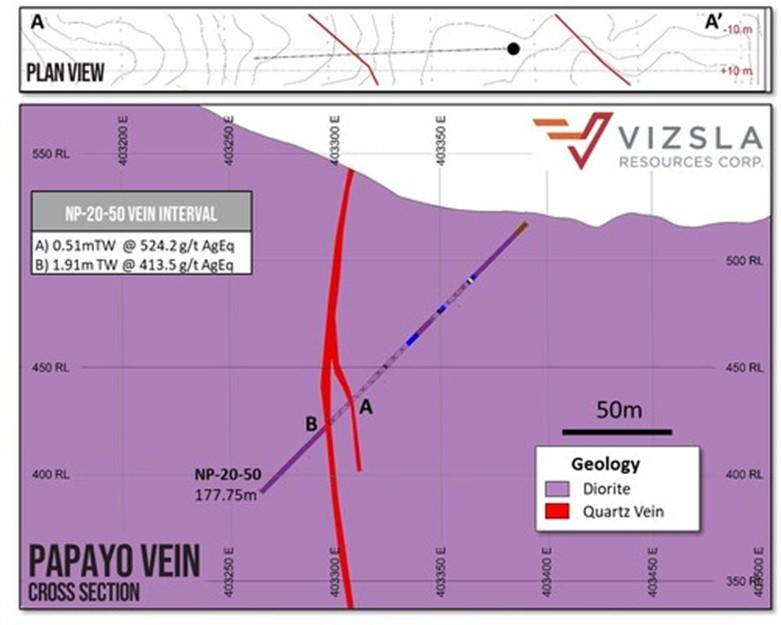