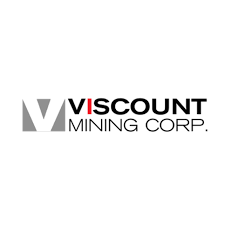 Approximately 1.2 kilometers NNW of the Kate Silver Resource lies a geochemically distinct, yet likely hydrothermally related deposit historically referred to as the Passiflora Deposit. According to a mining report by R. A. Rivera (1983), nearly 18,000 tons of silver valuing over $500,000 was extracted from the Herman-Passiflora Mine between 1916 and 1948. A major shaft collapse in 1945 left notable ore unrecovered (Joseph M. Bradley, 1948). A reserve calculation by CoCa Resources for the Passiflora target released in 1983 indicated at least 64M oz. silver at 51.9 G/T (not NI 43-101 compliant) stating, “a sustained advance in the silver price to the $15 level would make the deposit quite attractive (R. A. Rivera, 1983).” With the price of silver now well over this mark, Viscount has begun to further develop an understanding of the Passiflora target.

In November of 2020, Viscount drilled their first NI 43-101 compliant drill hole (20-05) in the Passiflora target. This hole displayed detectable silver and gold concentrations for nearly the entire bored depth (over 170 meters), including a 1.5-meter interval at 84.5 G/T silver and 0.414 G/T gold. The hole also showed anomalous pyrite and abundant silica and clay alteration, especially towards the bottom of the hole. The encouraging results prompted Viscount to do additional field mapping and plan future drilling. In April of 2021, during the second phase of the program, Viscount drilled another three holes in the Passiflora (21-08, 21-09 & 21-10). The map below shows the locations of these drill holes, which were chosen based upon limited historic drilling data. 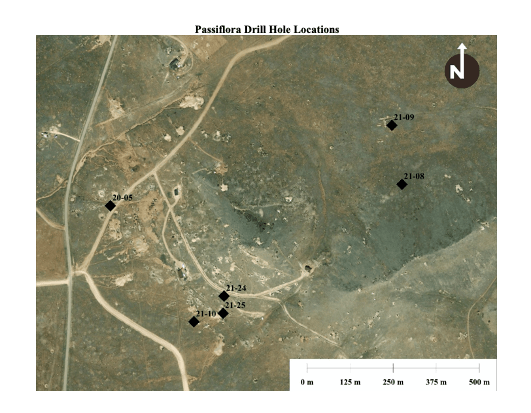 Drill holes 21-09 and 21-10, which are distanced over 800 meters apart from each other, both have sections with grades above cut-off, with 21-09 showing 10.4 meters at 0.262 G/T gold and 21-10 displaying detectable amounts of silver and gold for its entire 183-meter depth, including 1.8 meters at 142.3 G/T silver. The strong results from phase 2 encouraged Viscount to further explore the southwest area of the Passiflora.

During Viscount’s most recent drill program, in September of 2021, a final two holes were drilled in the Passiflora target (21-24 & 21-25). Both holes exhibited significant concentrations of silver, with hole 21-25 showing the most significant interval yet observed by Viscount in the Passiflora. From the depth of 68.9 meters to 107.0 meters, drill hole 21-25 encountered 40.1 meters testing at 43.2 G/T silver.

While the presented concentrations are of merit, the underlining potential could lie just a bit deeper. In each of the six holes drilled by Viscount in the Passiflora target, evident phyllic alteration and associated metal concentration increases were observed throughout the entirety of the drilled depth. Core photos from drill holes 21-24 and 21-25, depicting intense alteration and hydrothermal mineral replacement are shown below.

The level of increased alteration displayed, as well as the volcanic history of the region as a caldera, make it completely plausible to believe that the Passiflora target could be a porphyry at depth. This caldera is one of at least ten eruptive centers of the Central Colorado Volcanic Field (CCVF). Four of these ten have been further classified as silicic eruptive centers, of which the Silver Cliff caldera is one (McIntosh and Chapin, 2004). Another member of this classification is Newmont’s Cripple Creek Mine, a highly profitable, still active deposit located ~70km NNE of the Passiflora. The ore being mined at Cripple Creek is primarily from diatremes (volcanic breccia pipes), which overlie sulfide-altered, porphyritic igneous intrusions. A similar system of diatremes and sulfide-hosting igneous intrusions may also exist at depth in the Passiflora target. In order to verify this concept, Viscount management is currently considering a telluro-magnetic survey to more precisely delineate targets at depth.

Silver Cliff Exploration Manager, Jacob Hooker, commented on the comparison of the Passiflora and Cripple Creek, saying, “The striking similarities between the Passiflora Deposit and the well-known Cripple Creek Deposit, both in terms of geologic environment and depositional age, suggest that a highly profitable diatreme deposit could also exist at the Passiflora.”

Jim MacKenzie, Viscount CEO stated,” There is immense potential at the Passiflora as drilling identified widespread silver mineralization over 170 meters per hole on multiple drill holes. We are currently pinpointing next steps to unlock the potential for Passiflora resources and will have further info in upcoming news releases”

Quality Assurance/Quality Control Measures, Chain of Custody:
All Viscount’s drilling to date has been core. The company has implemented a rigorous quality assurance/quality control program at the Silver Cliff project. Core is retrieved from the drill site to a locked storage facility, where it is logged and then cut by independent geologists. Half of the core is bagged, and standards, blanks and duplicates are frequently inserted in to the sample stream. These are then boxed and then shipped via USPS to Skyline Labs in Tucson, Arizona. Pulps and rejects will then be retrieved, and stored with the split core at our locked facility.

The Silver Cliff property in Colorado lies within the historic Hardscrabble Silver District in the Wet Mountain Valley, Custer County, south-central Colorado. It is located 44 miles WSW of Pueblo, Colorado, and has year-around access by paved road.   The property consists of 96 lode claims where high grade silver, gold and base metal production came from numerous mines during the period 1878 to the early 1900’s.  The property underwent substantial exploration between 1967 and 1984. The property is interpreted to encompass a portion of a large caldera and highly altered sequence of tertiary rhyolitic flows and fragmental units which offers potential to host deposits with both precious and base metals.  This has been demonstrated in the mineralization historically extracted from the numerous underground and surface mining operations.  Based on the accumulated data and feasibility study, Tenneco Minerals made the decision with silver at $5.00 USD an ounce to construct at that time a $35,000,000 USD milling operation for the extraction of the silver reserves at Silver Cliff. Shortly thereafter Tenneco’s Mining Unit was sold, and the planned milling operation was abandoned.

The Cherry Creek exploration property is in an area commonly known as the Cherry Creek Mining District, located approximately 50 miles north of the town of Ely, White Pine County, Nevada.  Cherry Creek consists of 578 unpatented and 17 patented claims as well as mill rights. Cherry Creek includes more than 20 past producing mines. In January 2021, Viscount entered an exploration earn – in agreement with a wholly owned subsidiary of Centerra Gold Inc. Centerra is a Canadian-based gold mining company focused on operating, developing, exploring and acquiring gold properties in North America, Asia and other markets worldwide.