On this day in Canadian history (September 3, 1962) Prime Minister John Diefenbaker officially opens the Trans-Canada Highway to traffic, 12 years after starting construction, eliminating the final 160 km of dusty, gravel road from Golden, BC to Revelstoke, BC. Running almost 9,000 km, from St. John’s, Newfoundland to Victoria, BC, the Trans Canada is the longest national highway in the world, stretching over 4,800 miles from coast to coast. Total construction costs for the highway came to over $1 billion. Newfoundland had the second-longest distance to cover, after Ontario, and the most difficult terrain, after British Columbia. With a population of 500,000, it had the second smallest number of people to absorb the costs, and its per capita income was the lowest. 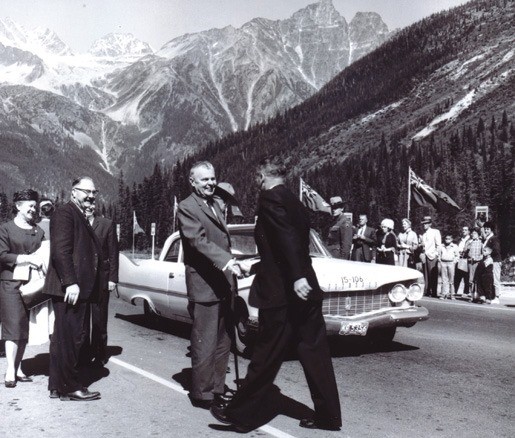 On September 3, 1962, Prime Minister John Diefenbaker and representatives from all ten provinces attended the opening ceremonies at Rogers Pass.

Rise Gold Corp. (CSE: RISE) (OTCQB: RYES) announces that it has closed the US$1 M debt financing with Eridanus Capital LLC previously announced in its August 20th, 2019 news release. Eridanus Capital LLC is an affiliate of Myrmikan Capital, LLC, which operates in the gold and silver junior mining sector.

City View Green Holdings Inc. (CVG.) trading through the facilities of the Canadian Securities Exchange under the symbol “CVGR” is pleased to announce that it has entered into a Letter of Intent with Blue Heaven Coffee Company to purchase 100% of the company for a combination of cash and shares. Further details to be provided upon signing of a definitive agreement. >> Learn more

Mistango River Resources Inc. (CSE: MIS) is very pleased to announce that the exploration permit for the Omega Property has been received and our drilling contractor is on-site and proceeding with Phase V of our new exploration program. >> Learn more

Dundee Sustainable Technologies Inc. (CSE: DST) is pleased to report the announcement of the plan from the governments of Canada, the Yukon and the North-West Territories to invest $2.2 billion over the next 20 years in the clean up of eight (8) abandoned mine sites. >> Learn more

Osoyoos Cannabis Inc. (CSE:OSO) wishes to announce that its letter of intent with Anahit International Corp. as previously announced on May 16, 2019 has been terminated. Pursuant to the LOI, Osoyoos and Anahit were to complete a business combination that would result in a reverse takeover of Osoyoos. Osoyoos and Anahit mutually agreed to terminate the LOI after concluding that the expected synergies of the transaction were unlikely to be realized. >>Learn more

Copper One Inc. is pleased to announce that the Company has completed its change of business to an investment company under the rules of the Canadian Securities Exchange, with trading on the CSE commencing on September 5, 2019 under the symbol “QSC”. The Company’s common shares were previously de-listed from the TSX Venture Exchange, effective August 13, 2019, as announced on August 14, 2019.

The Yield Growth Corp (CSE: BOSS) (OTCQB: BOSQF) (FSE: YG3) announces that it is supporting its thriving licensing and white label; business currently with $3.7 million in signed agreements in the past 14 months, with continued development of its product catalogue. >>Learn more

Talisker Resources Ltd. (CSE:TSK | OTCQB:TSKFF) is pleased to announce that further to its press releases of August 29, 2019, the Company has closed the final tranche of its previously announced private placement financing of $4,159,098. >> Learn more

SponsorsOne Inc., (CSE: SPO) (Frankfurt: 5SO), the company that makes small brands BIG through large, engaged, authentic communities of micro-influencers that buy and support the brands they love, announces that it has entered into a letter of intent for the arm’s length acquisition of all of the issued and outstanding common shares of Verve Beverage Company. In addition, SPO is pleased to announce a non-brokered private placement of 20,000,000 commons shares at a price of $0.05 per common share with an overallotment option of up to an additional 10,000,000 common shares at $0.05 per common share. >> Learn more

Generation Mining Limited (CSE:GENM) is pleased to announce that, further to its news release dated August 29, 2019, it has closed the second and final tranche of its previously announced non-brokered private placement financing through the issuance of 417,460 flow-through common shares at a price of $0.315 per Flow-Through Share for gross proceeds of $131,500. >> Learn more

Generation Mining Limited (CSE:GENM) is pleased to report that a new independent Mineral Resource Estimate of the Marathon Deposit of the 51%-owned Marathon palladium-copper project in Northern Ontario estimates a 20% increase in contained Palladium-Equivalent ounces compared with the most recently published Mineral Resource on the Property from 2010. >> Learn more

Developers in Canada are currently building about 20.7 million square feet (MSF) of new office space across the country, with just over 89 per cent of that in Toronto, Montreal and Vancouver. South of the border, U.S. developers are putting up just under 126 MSF, with about 79 per cent of that space in American cities larger than 2.4 million residents.