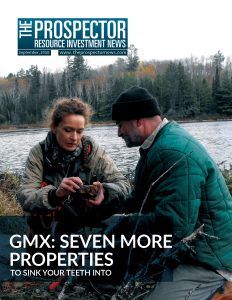 04 GMX: Seven More Properties to Sink your Teeth Into

the world” Expects, “Spectacular results similar to what we had in 2017”

“It’s an extremely high-grade volcanic system hosted in Nevada in the Walker Lane.”

18 A Longer Wait for a Metal Rally Thanks Chiefly to Chairman Powell!

I’ve been reading forecasts that long-suffering metals and mining stocks are due for a rally this Fall now that the “Summer doldrums” are over.

Nickel laterite deposits are, in relative terms, abundant and located at shallow depths within the earth’s crust, making them an ideal low-cost nickel source for the stainless steel industry.

Fiat “money” is currency backed by nothing more than faith. This assurance rests on the assumption that when spent, the retained value will be such that you can […]

28 Golden Opportunity in the Triangle: AMK

BC’s ‘Golden Triangle’ is one of the richest areas of mineralization in the world with over 500,000,000,000 worth of in situ resources in the ground so far.