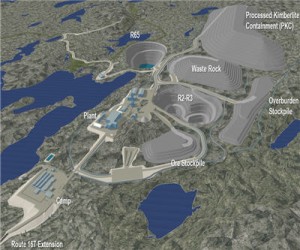 Stornoway Diamond Corporation (TSX:SWY) is pleased to announce that Blackstone Tactical Opportunities, an affiliate of Blackstone (NYSE:BX), has acquired a meaningful equity position in Stornoway and a minority ownership interest in the Renard diamond stream by way of a secondary market transaction with Orion Mine Finance.

The Renard diamond stream was concluded in July 2014 by FCDC Sales and Marketing Inc. a wholly owned subsidiary of Stornoway, by which FCDC agreed to sell a 20% undivided interest in diamonds produced from the Renard Diamond Project for an up-front payment of US$250 million. Following the Blackstone-Orion transaction, Orion remains the majority owner of the Renard stream interest and continues to be the second largest shareholder with an approximate 20% stake in Stornoway’s issued and outstanding common shares.

Matt Manson, President and CEO, commented “We are very happy to welcome Blackstone as a shareholder and streaming partner in the ongoing development of the Renard Diamond Project. Blackstone’s transaction with Orion is additional validation of the good progress being made by the Stornoway team and in the long term fundamentals of the diamond mining sector. Blackstone’s global presence and their long-established status as one of the world’s leading investment firms make them ideally suited to Stornoway as we work to build a world class diamond mining company.”

“Blackstone is excited to partner with Stornoway and Orion in the development of this high-quality diamond asset with significant resource potential,” said Jasvinder Khaira, Managing Director of Blackstone Tactical Opportunities. “The Stornoway team are talented operators, uniquely situated to bring the Renard mine to production on time and on budget. Our partnership with Stornoway is consistent with our strategy of backing best-in-class managers and exceptional assets in the mining industry.”

Oskar Lewnowski, Chief Investment Officer of the Orion Mine Finance Group, commented “As one of the largest investors dedicated to the mining industry since 2004, we are delighted to introduce Blackstone to the Renard project. We continue to have a great amount of confidence in Stornoway’s management team and maintain our support for the Renard Project as a leading shareholder and the majority stream buyer.”

The Renard Diamond Project is fully financed and permitted for development of an open pit and underground diamond mine that is expected to produce an average of 1.6 million carats per year over an initial 11-year mine life, representing approximately 2% of global diamond supply by value. The project remains on schedule for plant commissioning beginning in late 2016 and commercial production in the second quarter of 2017.

The Renard Diamond Project is located approximately 250 km north of the Cree community of Mistissini and 350 km north of Chibougamau in the James Bay region of north-central Quebec. On July 8th 2014 Stornoway announced the completion of a $946 million (1) project financing transaction to fully fund the project to production, and construction commenced on July 10th, 2014. First ore is scheduled to be delivered to the plant in the second half of 2016 with commercial production scheduled for the 2nd quarter of 2017.

In January 2013, Stornoway released the results of an Optimized Feasibility Study at Renard which highlighted the potential of the project to become a significant producer of high value rough diamonds over a long mine life. Probable Mineral Reserves, as defined in National Instrument 43-101 – Standards of Disclosure for Mineral Projects stand at 17.9 million carats. Total Indicated Mineral Resources, inclusive of the Mineral Reserve, stand at 27.1 million carats, with a further 16.85 million carats classified as Inferred Mineral Resources, and 25.7 to 47.8 million carats classified as non-resource exploration upside. Average annual diamond production is forecast at 1.6mcarats/year over the first 11 years of mining, at an average valuation of US$190/carat based on a March 2014 assessment by WWW International Diamond Consultants Ltd.

Readers are cautioned that the potential quality and grade of any target for further exploration is conceptual in nature, there has been insufficient exploration to define a Mineral Resource and it is uncertain if further exploration will result in the target being delineated as a Mineral Resource. All kimberlites remain open at depth. Readers are referred to the technical report dated February 28th, 2013 in respect of the January 2013 Optimization Study, and the press release dated July 23, 2013 in respect of the July 2013 Mineral Resource estimate, for further details and assumptions relating to the project. Disclosure of a scientific or technical nature in this press release was prepared under the supervision of Patrick Godin, P.Eng. (Quebec), Chief Operating Officer and Robin Hopkins, P.Geol. (NT/NU), Vice President, Exploration, both “qualified persons” under NI 43-101.

(1) For illustrative purposes. Assumes a C$: US$ conversion rate of $1.10. Actual proceeds of each financing tranche are measured at the C$: US$ exchange rate in effect the date the funds are received.

Blackstone is one of the world’s leading investment firms. We seek to create positive economic impact and long-term value for our investors, the companies we invest in, and the communities in which we work. We do this by using extraordinary people and flexible capital to help companies solve problems. Our asset management businesses, with over $300 billion in assets under management, include investment vehicles focused on private equity, real estate, public debt and equity, non-investment grade credit, real assets and secondary funds, all on a global basis. Blackstone also provides various financial advisory services, including financial and strategic advisory, restructuring and reorganization advisory and fund placement services.

The Orion Mine Finance Group is one of the world’s leading mining-focused investment businesses with approximately $1.8 billion under management specializing in providing flexible capital investment solutions to mining companies in the base and precious metals sector. Orion has demonstrated capability in debt, equity, convertibles, streaming, and royalty investments. In addition, the Orion Mine Finance team has experience in the physical metals markets, such as facilitating the purchase, metal financing, transporting, processing and selling of a mine’s output to end customers.