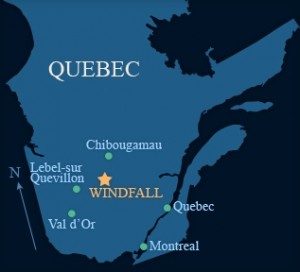 Southern Arc Minerals Inc. (TSX VENTURE:SA)(OTCQX:SOACF) is pleased to announce that it has entered into a strategic investment agreement with Eagle Hill Exploration Corporation (TSX VENTURE:EAG) pursuant to which Southern Arc will acquire a 26.2% interest in Eagle Hill. Under the agreement with Eagle Hill, Southern Arc will invest $7.3 million to acquire 97,333,333 units of Eagle Hill by way of private placement at a price of $0.075 per share. Each unit comprises a common share of Eagle Hill and a half share purchase warrant, with each whole warrant entitling the holder to acquire a further common share of Eagle Hill at a price of $0.10 for a period of four years.

Dundee Corporation (TSX:DC.A) will also participate in the private placement by investing $4.7 million to acquire 62,666,667 units of Eagle Hill, thereby increasing its ownership of Eagle Hill from 18.8% to 26.2%.

“We have been involved in the development of Eagle Hill’s Windfall Lake Project and the surrounding gold camp for approximately 20 years and are excited to see the project getting closer to being a producer,” said Ned Goodman, President and CEO of Dundee Corporation. “We are excited to continue to support Eagle Hill and believe the high-grade Windfall Lake mineralization has very good potential to grow well beyond the current resource.”

Southern Arc’s Chairman and CEO, John Proust, stated: “This new Canadian investment is consistent with Southern Arc’s previously announced strategy to diversify, protect and promote shareholder interests through participation in advanced-stage gold projects in favourable jurisdictions outside of Indonesia. Windfall Lake is a strategic addition to our project portfolio that we believe can be rapidly advanced.

“The Southern Arc and Dundee partnership will provide the financial strength, expertise and leadership to unlock the value of this property,” continued Mr. Proust. “Commencing in September 2013, over a 12 to 18 month period Eagle Hill will execute a major new drilling program focused on extending the resource base at Windfall Lake and upgrading the status of the Inferred Resources.”

With this investment and concurrent transactions, Eagle Hill will own 100% of the Windfall Lake Gold Deposit, which comprises 2,002 hectares in the Abitibi region of Quebec. The Windfall Lake Gold Deposit is located 190 km northeast of Val d’Or, Quebec, a highly favourable jurisdiction for exploration and mining. The greenstone belts of the Abitibi region constitute one of the most prolific gold-producing regions in the world, having produced over 170 million ounces of gold to date. The project is easily accessible by paved highways and all-weather gravel roads. To date 641 diamond drill holes totaling 162,097 metres have been completed on the property, of which 356 (105,340 metres) were considered for the geological and resource modelling.

Two styles of high-grade gold mineralization have been identified to date at the Windfall Lake Gold Deposit: pyrite-rich disseminations and stockworks occur in the “Main Zone” and its extensions, and more standard shear-hosted type mesothermal mineralization has been drilled in two adjacent locations (Zone F17 and Zone F51). Gold mineralization within the Main Zone has been confirmed by drilling in at least 50 subvertical lenses between two and 35 metres wide occurring within a northeast trending zone 1,400 metres long by 600 metres wide. At least five of the larger lenses (named Mallard, Mink, Cariboo, Zone 27 South, Zone 27) exhibit good lateral and vertical continuity.

Since completion of the SRK July 2012 NI 43-101 technical report, Eagle Hill has completed a further 101 core drill holes for 29,208 metres. This drilling has confirmed extensions to the main mineralized zones both near surface and at depth below previously known mineralization, highlighting the potential to expand the resource with further drilling.

“Windfall Lake is exactly the type of property we’ve been looking for: an advanced resource definition stage gold project located in a region recognized internationally as a prolific, mining-friendly jurisdiction,” said Dr. Mike Andrews, President and COO of Southern Arc. “Our extensive technical due diligence has confirmed the very high standard of exploration carried out by the Eagle Hill geological team and the quality of the high-grade resource defined to date. Windfall Lake presents Southern Arc with the opportunity to acquire a significant position in a high-quality gold project with good potential for expansion and revaluation.”

Pursuant to the agreement, Eagle Hill will pay $5 million in cash and issue 25 million common shares of Eagle Hill to acquire Noront’s remaining 25% interest in the Windfall Lake Property. The acquisition of the remaining interest from Noront will complete concurrently with closing of the strategic investment by Southern Arc and Dundee in Eagle Hill.

Southern Arc will call a shareholder meeting to obtain approval of the proposed strategic investment in Eagle Hill. Closing of the investment agreement with Eagle Hill is subject to Southern Arc and Eagle Hill obtaining appropriate shareholder and regulatory approvals. The securities to be issued pursuant to the private placement will be subject to a four-month and one-day hold period in accordance with applicable securities legislation.