El Picacho results being reported in this news release represent 42 drill holes totalling an estimated 11,420 metres. Drilling focused on El Picacho Vein and the near parallel discovery, El Picacho HW Vein (see Table below). Twenty-one (21) of these 42 holes intercepted El Picacho Vein with a cutoff grade of 150 gpt AgEq and minimum ETW of 0.50 metres. The program has successfully intercepted precious metal mineralization within El Picacho Vein across an area of approximately 500 metres along vein strike and 300 metres down vein dip from surface. This mineralized footprint is an expansion of the previous historic unverified resource area (see attached Figures and historic notes below).  All access rights and necessary drill permits (5-year license) are in place for continued drilling.

The most significant high-grade intercept to date is in hole PI-20-006 with 7.25 metres ETW grading 40.49 gpt Au and 260.4 gpt Ag, or 3,297 gpt AgEq. The following tables summarize the most significant drill intercepts (uncapped, undiluted) above a cut-off of 150 gpt AgEq and with a minimum ETW of 0.50 metres:

The Property was a historic gold and silver producer, with the first noted production in late 1800s with grades greater than 15 gpt gold (Bird, 1904). Several companies have explored the Property over the past 30 years; most notably Yamana Gold Inc. (“Yamana”) in 2012 which completed a total of 67 drill holes for 10,789 metres (37% reverse circulation and 63% core), including 24 holes for a total of an estimated 4,871 metres in El Picacho Vein. Over 1.7 kilometres of near surface historic underground workings are present in El Picacho Vein that are partially accessible by a 4 metre by 4 metre decline that exposes the mineralized vein.

El Picacho Vein has a historic unverified mineral resource estimate reported in 2010 (Wheatley, 2010) using 14 drill holes, underground channel sampling results and a polygonal estimation method. The reported estimate had 364,381 tonnes grading 8.54 gpt Au and 40.38 gpt Ag, or 100,060 ounces of gold and 473,052 ounces of silver using a 1 gpt gold cutoff. A qualified person has not done sufficient work to classify the historical estimates as current mineral resources or mineral reserves. The Company is not treating this information as current mineral resources or reserves, has not verified this information and is not relying on it. The Company plans on using the historical drilling and estimates to help guide its exploratory drilling work.

The Company currently has three core drills operating and is planning further expansion drilling in 2021 for the Picacho, Picacho HW veins, and other veins on the Property.

SilverCrest is a Canadian precious metals exploration and development company headquartered in Vancouver, BC, that is focused on new discoveries, value-added acquisitions and targeting production in Mexico’s historic precious metal districts. The Company’s top priority is on the high-grade, historic Las Chispas mining district in Sonora, Mexico, where it has completed a feasibility study on the Las Chispas Project and is proceeding with mine construction. Start up of production at the Las Chispas Mine is targeted for mid-2022. SilverCrest is the first company to successfully drill-test the historic Las Chispas Property resulting in numerous high-grade precious metal discoveries. The Company is led by a proven management team in all aspects of the precious metal mining sector, including taking projects through discovery, finance, on time and on budget construction, and production. 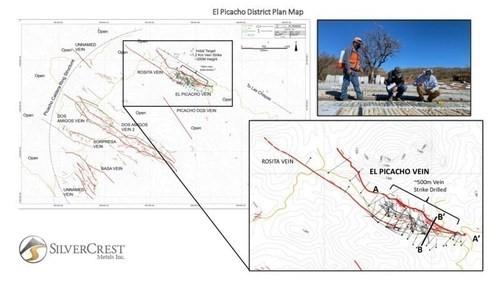