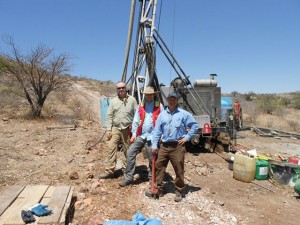 Riverside Resources Inc. (TSX-V: RRI) and its partner, Antofagasta Minerals S.A., are pleased to announce that Reverse-Circulation (RC) drilling and exploration work are now underway at the Flute and Lennac Designated Projects located east of Smithers in central British Columbia. The 2013 exploration work program will include extensive RC drill testing, Ah-horizon soil sampling, geological mapping and rock sampling. The program has been planned to both expand anomalous zones identified over the 2012 season and to test new targets within the Flute and Lennac properties with an aggressive RC top-of-bedrock drill campaign.
The RC drill plan includes initially drilling 56 planned holes on the Lennac (9 holes) and Flute (47 holes) properties and 20 contingent drill-holes for an initial follow-up on encouraging results from the top-of-bedrock sampling. The RC drill program follows an Ah-horizon soil sampling program which was initiated in mid-May this year to evaluate prospective areas with limited outcrop. Approximately 400 Ah-horizon soil samples have been sent for assay with several new anomalous zones already identified for priority follow-up.
In addition to the Flute and Lennac properties, Riverside continues to stake strategic exploration ground while also evaluating third party acquisition opportunities throughout the alliance area of interest.

“Riverside looks forward to further exploration results as we continue to delineate strong copper targets at the existing Designated Projects, while working hard to deliver further discovery prospects for the alliance as we continue moving forward.”

Riverside is a well-funded prospect generation team of focused, proactive gold discoverers with the breadth of knowledge to dig much deeper. The Company currently has approximately $6,000,000 in the treasury and 37,000,000 shares outstanding. The Company’s model of growth through partnerships and exploration looks to use the prospect generation business approach to own resources, while partners share in de-risking projects on route to discovery.