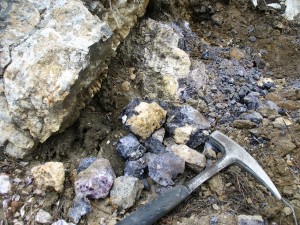 Prima Fluorspar Corp. (TSX-V:PF) is pleased to announce that it has entered into a property option agreement dated June 27, 2014 with DG Resource Management Ltd. whereby Prima can acquire an undivided 100% interest in and to 46 mineral claims covering more than 42,000 ha (104,000 acres) in the southern portion of the Slave Province, Northwest Territories. The claims are called the Godspeed Lake Diamond Property.

Reflecting its new focus on diamond exploration, the Company also announces that it has changed its name to “Prima Diamond Corp.” and will now trade under the symbol “PMD” on the TSX Venture Exchange which is subject to Exchange acceptance.

A new diamond mine in the Southern Slave Province in the Northwest Territories – Gahcho Kué – is slated for production in 2016 and is located immediately north of the Godspeed Lake Diamond Property.

“Diamond exploration in Canada is attracting increased attention with world diamond supplies dwindling as several of the bigger mines decrease production while the demand for diamonds is increasing with particular growth in China and India.

The Godspeed Lake Diamond Project borders Gahcho Kué considered to be the world’s largest and richest new diamond mine. Godspeed is within 5 kilometers of the heart of the Kennady Diamond Kimberlite Cluster.

Godspeed is significantly under-explored compared with other properties in this area and represents excellent potential to discover additional kimberlites.

In consideration of the grant of the option, Prima has agreed to pay to DG Resource an aggregate of $150,000 cash and the issuance of 4,500,000 common shares of Prima payable as follows:

an additional $100,000 upon Exchange acceptance;

an additional $20,000 within three months of Exchange acceptance;

an additional $20,000 within six months of Exchange acceptance; and

issue an additional 2,500,000 common shares one year after the Exchange acceptance.

DG Resource will also retain a 2½% Gross Overriding Royalty on all diamond production. Prima shall be entitled at any time to purchase 1% GORR for $2,000,000 in respect of all minerals other than diamonds. The Agreement is subject to final acceptance of the Exchange.

Prima is focusing on diamond exploration in the Southern Slave Province in Canada which hosts the proposed Gahcho Kué diamond mine and other diamond projects with high-grade, diamondiferous kimberlites at a time when world diamond demand is growing and supplies are decreasing.