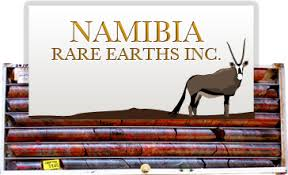 The PEA concludes that the Project currently has the potential to produce an average of 1,500 tonnes per annum of separated rare earth oxides which would generate after tax cumulative cash flow of US$257M with a net present value10% of US$147M and an internal rate of return of 43%. The PEA indicates that there is considerable potential to expand the current mineral resource and recommends that additional drilling be carried out to provide for an extended mine life in conjunction with a six month Prefeasibility Study program. Financial sensitivities of the Project are summarized in Table 1, financial highlights in Table 2, mineral resource estimates in Table 3, capital costs in Table 4, operating costs in Table 5 and REO pricing in Table 6.

Donald Burton, President of Namibia Rare Earths stated “This Preliminary Economic Assessment provides shareholders and investors with the first indications of the economic potential of Lofdal. The PEA confirms the strengths of the Project in terms of its favourable rare earth distribution and amenability to conventional mining and processing, and demonstrates its financial strengths in terms of the low capital costs and significant cash flows. The PEA provides a clear path forward for development of the Project. Management believes that there remains considerable upside to the Project as we move towards prefeasibility and feasibility studies. Together with on-going metallurgical optimizations, we will target additional drilling to significantly expand mineral resources and to establish mineable reserves thereby extending the life of mine. The Company will aggressively pursue the most expeditious path towards development of Lofdal through all available options.”

The PEA should not be considered to be a pre-feasibility or feasibility study, as the economics and technical viability of the Project has not been demonstrated at this time. The PEA is preliminary in nature and includes Inferred Mineral Resources that are considered too speculative geologically to have the economic considerations applied to them that would enable them to be categorized as Mineral Reserves. Furthermore, there is no certainty that the PEA will be realized.

Mining will be by conventional open pit methods utilizing an owner operated mine fleet at a mining rate of 2,500 tpd (840,000 tpa) with the ultimate pit reaching a vertical depth of 200 meters. A total of 6.04 MT of mineralized material at a diluted grade of 0.28% TREO will be provided to the primary crusher over the 7¼ year life of mine (“LOM”).

Following secondary and tertiary crushing the feed is delivered to x-ray technology and x-ray fluorescent sorters to eliminate internal waste thereby reducing volume to the ball mill for fine grinding. Ball mill product slurry is fed to the rougher magnetic separator with tails going through three scavenger magnetic stages. The magnetic concentrate product is subjected to a cleaner flotation circuit and then passes through a concentrate thickener prior to the acid leach circuit.

The leach circuit utilizes a four stage hydrochloric acid leach to dissolve the carbonate minerals. A gangue leach centrifuge circuit provides for a primary acid water wash to remove the entrained dissolved calcium chloride solution and a secondary potable water wash with a second centrifuge for solid-liquid separation. The resultant solids are filtered in a filter press for final concentrate bagging and shipping to a hydrometallurgical facility which is proposed to be located at the deep water port of Walvis Bay.

Concentrate batches of 29 tonnes each will be shipped in containers over a distance of 375 kilometers to the hydrometallurgical facility for caustic cracking and washing. The caustic cracking plant is designed for the purpose of breaking or “cracking” the phosphate component of the rare earth mineral xenotime in order to access the contained thorium for removal by subsequent HCl leaching. Following the caustic cracking stage the washed residue is transferred to the HCl digestion tank to leach the thorium. Subsequent precipitation steps will produce a thorium hydroxide product for storage and a rare earth hydroxide product to be combined with the HCl digestion residue as a final product for drying and drumming.

The Project is not of sufficient scale to support capitalization for a separation plant and it is envisioned that the final product will be delivered to a third party facility and subject to an offshore treatment charge.

The Project initial capital requirements are estimated at US$92,056,000.

Operating costs include the costs of the owner operated mine fleet, processing at the mill site and cracking plant facility, transportation costs for concentrates from the mine site to Walvis Bay and from port to an offshore treatment facility for separation. Technology Metals Research of the United States has indicated that a tolling charge of US$15-20/kg of finished REOs would be a reasonable estimate for the processing (outside of China) of an intermediate concentrate with a rare earth element distribution similar to the one associated with the Lofdal project to commonly required purity levels and finished forms. A separate cost has therefore been estimated for the offshore treatment cost and is considered as part of the total operating costs which are summarized in Table 5.

A price deck has been developed for 2017 by Technology Metals Research and Core Consultants, based on REO supply/demand projections and pricing models for that year, which would be a reasonable approximation of when Lofdal might be expected to enter production. The nature of the REE market is such that it does not lend itself to traditional models for commodity forecasting. In analysing potential future prices, consideration is given to the likely relative surplus or deficit of REEs available to the market, in order to gain a sense of price direction. Two key assumptions made in the price projections are that China maintains its production targets of 100,000 – 105,000 tonnes in the near to medium term, and that there are no sudden or unexpected policy changes in China that would shock the export market as occurred in 2010/2011. The resulting 2017 FOB China export price projections for REOs are shown in Table 6.

The economic analysis assumes that the Project will be 100% equity financed and uses parameters relevant as of September 2014, under conditions likely to be applicable to project development and operation and analyzes the sensitivity of the Project to changes in the key Project parameters. All costs have been presented in United States Dollars (US$) and wherever applicable conversion from South African Rand (ZAR) has utilized an exchange ratio (ZAR/US$) of 10.70 based on July 2014 exchange rates.

For the purposes of the PEA, the evaluation is based on 100% of the Project cash flows before distribution of profits to the equity owners. Both pre-tax and after tax cash flows have taken 5% royalty payments into account.

The Project is expected to pay back initial capital within the first two years.

The predominant environmental impacts associated with the mining activities are associated with surface and groundwater quantity, dust contamination and the potential side effects of radioactive thorium.  It is proposed that the baseline monitoring of surface water, groundwater, dust fallout and radiological background levels be undertaken. With the implementation of effective mitigation and management measures, any negative environmental and social impacts can be avoided, reduced and managed to ensure there are minimal long term or adverse impacts.

The PEA has been modelled on the available NI 43-101 mineral resources for the Lofdal Area 4 rare earth deposit at a 0.1% TREO cut-off. There are no mineral reserves estimated for the Project. Mining by open pit at a rate of 840,000 t/a provides just over seven years of mine life. The available resource is modelled to a vertical depth of 200 meters and the geological potential to increase the resource, as evidenced by deeper exploration drilling to over 300 vertical meters, is considered high.

The PEA has concluded that the Lofdal Area 4 heavy rare earth deposit can be easily mined by open pit and treated by conventional grinding, magnetic separation, gangue acid leach and cracking processes. Similar facilities are currently in operation locally in Namibia. The plant design was based on the results of the initial metallurgical test programme completed on deposit samples, which showed the suitability of sorting technology, magnetic separation, flotation and gangue acid leach treatment. The plant feed will be delivered to the mine site processing plant from the open pit mine using conventional mining practices and equipment suitable to this type of recovery. Hydrometallurgical cracking will be accomplished at a separate facility in Walvis Bay. The mixed REO concentrate must then be treated for separation at a suitable facility offshore.

The capital costs are estimated at US$155,735,000 and the economic model has concluded that the Project is positive based on the projected REO price deck which assumes a basket price for the heavy enriched Lofdal concentrates of US$105.77/kg. The costing estimates for the study were prepared in mid-2014 and based to a large extent on South African supply and installation rates, which are believed to be comparable with local Namibian rates.

Namibia Rare Earths Inc. is developing a portfolio of mineral exploration projects in Namibia and is currently focused on the accelerated development of the Lofdal Rare Earths Project in northwestern Namibia.