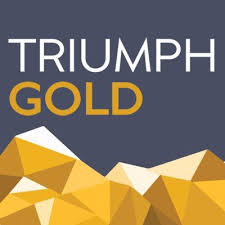 Triumph Gold Corp., (TSX-V: TIG) (OTCMKTS: TIGCF) is pleased to announce positive results from drilling at the Blue Sky Zone on their 100% owned, 200 km2, road accessible Freegold Mountain Property in the Yukon Territory with the intersection of 218.39 metres of 1.26 grams per tonne gold equivalent** contained within 304.39 metres of 1.00 g/t gold equivalent**.

Triumph Gold President, Tony Barresi (Ph.D., P.Geo.), comments: “It is with great pleasure that we announce positive drill results from the Blue Sky Zone, the second of three areas tested for high-grade, gold-rich porphyry style mineralization during the 2019 field season. Earlier in the season, drilling at the WAu Breccia met success, intersecting two mineralized zones that combined to form a very good intersection of 601.80 metres* averaging 1.1 g/t gold equivalent**. That success now continues with another long and rich intersection, three hundred meters away, at the Blue Sky Zone. As we continue to intersect and improve our understanding of these high grade breccia bodies, we build capacity to discover more of them and enhance the outcome of incorporating them into a future resource model.”

Table 1:  Highlighted Results from 2019 Drilling at the Blue Sky Zone

The 2019 exploration program on Triumph Gold’s Freegold Mountain property is now complete, wrapping up a third consecutive year of aggressive and successful, discovery-driven exploration. Results to date, from the 2019 program, document continued exploration success with long intersections of gold-rich mineralization at both the WAu Breccia and the Blue Sky Porphyry Breccia in drill holes located approximately 300 meters apart.

Since 2017 renewed focus on the Revenue-Nucleus area of the Freegold Mountain Property has resulted in multiple high-grade discoveries, including the high grade Blue Sky Porphyry Breccia.

The 2019 program included seven drill holes (5,557.26 metres) designed to test for a buried gold-copper porphyry system beneath the six kilometre long, Revenue-Nucleus soil and geophysical anomaly. Three targets, spanning 1.7 kilometre strike length were selected for drilling: the WAu Breccia, the Blue Sky Porphyry Breccia, and Big Red, a geophysical anomaly. Results are still pending for one drill hole at the WAu Breccia and two drill holes that tested Big Red; these data will be released as they are received and validated.

The Revenue-Nucleus area, which was the focus of the 2019 drill program, covers just a small portion of the 200 km2 Freegold Mountain Property. Other exploration on the same highly prolific property included trenching, mapping, and hyperspectral surveys at the Goldstar/Irene epithermal gold vein target, the previously undrilled but drill-ready Cabin porphyry system, and the Tinta polymetallic vein deposit. These results are pending and will be released in upcoming weeks.

About The Blue Sky Zone

Mineralization associated with the Blue Sky Porphyry Breccia consists of chalcopyrite and molybdenite in quartz veins, hydrothermal breccia matrix, and disseminated in hydrothermally-altered Mid-Cretaceous granite and late syn-mineral quartz-feldspar porphyry dykes (see PR18-09 dated September 12, 2018 for a full list of the 2017/2018 high grade intersections). The most intense mineralization is associated with strong potassic alteration (K-feldspar grading outwards into biotite). A set of late quartz-carbonate veins are concentrated within the main mineralized zone and contain variable amounts of chalcopyrite, molybdenite, galena, sphalerite, bismuthinite, and visible gold. Although the breccia is gold-rich throughout, late quartz-carbonate veins represent an important second stage of gold enrichment.

RVD19-03 was drilled steeply (-85 degrees) north-northwest to test for the down-dip extension of the Blue Sky Porphyry. Although low-grade porphyry gold-copper mineralization was intersected from surface to 435 metres depth (Table 2), RVD19-03 did not intersect the zone of high grade mineralization. RVD19-03 was designed as a de-risking/information gathering hole in preparation for RVD19-04, so the information gained by drilling RVD19-03 was used to modify the planned orientation of RVD19-04, leading to successful intersection of the Blue Sky Porphyry Breccia.

RVD19-04 was designed to drill down plunge of the Blue Sky Porphyry Breccia to efficiently test continuity of mineralization to depth, while also using the breccia body as a vector towards an underlying porphyry system. RVD19-04 intersected the mineralized zone approximately 70 metres above where previously modeled. According to the updated model, RVD19-04 exited into the footwall of the mineralized zone at 496 metres because the inclination of the hole was too steep, however, mineralization remains open at depth. In addition to making a long intersection of the high-grade Blue Sky Porphyry Breccia, several domains of lower grade mineralization were intersected near surface in the hangingwall and in the footwall (Table 2).

Coordinates are given in North American Datum 83 (NAD83), Zone 8.

* Reported assays are uncut weighted averages and represent drilled core lengths. The true width of reported mineralization is unknown.
** Gold equivalent [AuEq], and copper equivalent [CuEq] are used for illustrative purposes, to express the combined value of gold, silver, molybdenum and copper as a percentage of gold or copper.  No allowances have been made for recovery losses that would occur in a mining scenario.  AuEq and CuEq are calculated on the basis of US$2.50 per pound of copper, US$12.70 per pound of molybdenum, US$1,510 per troy ounce of gold and US$17.00 per troy ounce of silver.

Drill core samples ranged between 1 and 2 metres length and were cut at Triumph’s core logging facility on the Freegold Mountain Property. The samples were analyzed by SGS Canada of Vancouver, British Columbia.  They were prepared for analysis according to SGS method PRP89: each sample was crushed to 75% passing 2mm and a 250g split was pulverized to better than 85% passing 75 micron mesh.  Gold was tested by fire assay with atomic absorption finish on a 30g nominal sample (method GE FAA313), and samples that tested over 10 g/t Au were retested using a 50g sample and a gravimetric technique. An additional 35 elements were tested by ICP-AES using a four-acid digestion (method GE ICP40B), over limit samples for copper were retested using the same technique but with ore grade four acid digestion and a higher range of detection (method GA AAS42S). Quality assurance and control is maintained at the lab through rigorous use of internal standards, blanks and duplicates.  An additional QAQC program was administered by Triumph Gold: at minimum three quality control samples, consisting of blanks, certified reference standards and duplicates, are blindly inserted into each 75 sample batch.  QAQC samples that return unacceptable values trigger investigations into the results and reanalyses of the samples that were tested in the batch with the failed QAQC sample.

The technical content of this news release has been reviewed and approved by Tony Barresi, Ph.D., P.Geo., President of the company, and qualified person as defined by National Instrument 43-101.