Playfair (TSX-V:PLY) has applied for Mineral Rights and have confirmation of first priority to explore the approximately 216 square kilometer North Østerdalen Project. These rights are issued directly from the Norwegian government by application to the Directorate of Mining. There are no underlying property deals or royalties.

The North Østerdalen Project covers almost 50 kilometers of strike of the Hersjø Formation beginning about 20 kilometers East from the Western boundary of Playfair’s Folldal project and near to Playfair’s RKV Project (see attached maps). It includes three former copper/zinc mines and numerous sulphide occurrences some of which have returned significant gold assays. The Sivilvangen deposit was extensively drilled in 1990-1991. The last recorded systematic regional exploration over the property occurred during the early 1980‘s.

A total of 297 samples, including 15 blanks,14 standards and 14 duplicates from the 2022 drilling were cut and sent for analysis. All 254 core samples contained significant sulphide mineralization. Anomalous values of copper, cobalt, lead, zinc, gold, and silver were encountered over short core lengths. No significant ore grade values were encountered.

Playfair believes that the consistent, repeatable high MMI copper values in soil were formed by the accumulation of acid leached copper ions in topographic low areas. The source of the copper appears to be in topographic high areas local to the MMI copper anomalies.

Playfair’s Phase 2 exploration at RKV will focus on deeper exploration, in particular the down plunge extension of known, partially mined deposits such as Røstvangen and Kvikne. The RKV property has been reduced to reflect this focus.

Don Moore, CEO of Playfair, comments: “Playfair has been exploring in Norway since 2019. Playfair’s approach is to apply modern technology to the exploration of underexplored historic mining districts in South Central Norway. These districts with favorable geology and known mineral deposits have not undergone systematic regional exploration for over 40 years. We are confident that a modern exploration approach to selected properties will generate excellent targets for copper, zinc, and gold discoveries during a time of strong metal prices.” 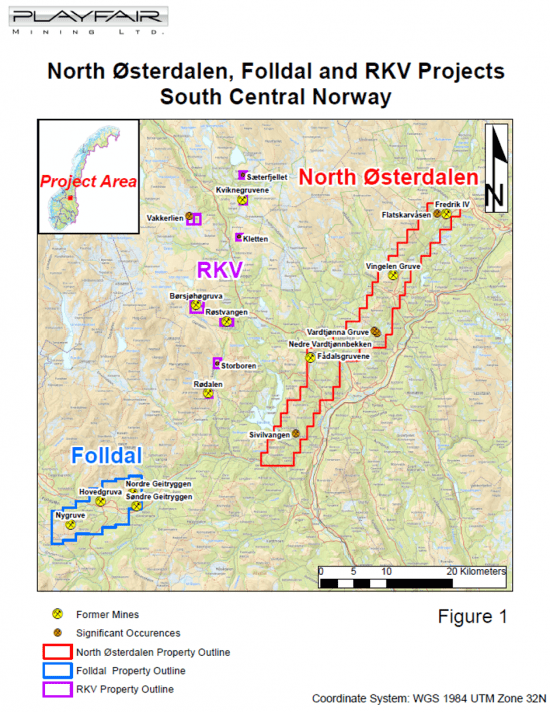 The following summary of former producing mines and significant occurrences is derived from The Norwegian Geological Survey’s Ore Database. All metal values, mining production tonnages and geological dimensions reported herein are strictly historical in nature, were derived from third party sources compiled by NGU, they pre-date are non-compliant with NI 43-101. Playfair is not treating the historical estimates as current mineral resources or reserves.

Fådalsgruvene opened in 1660, there was sporadic production in 5 periods ending in 1788. Little is known about this mine. NGU sampling of the old dumps showed up to 4.3% Cu, 2.5% Zn and little or no gold or silver. NGU Ore Database details can be found here .

Vingelen gruve was discovered in about 1800. About 30,000 t of ore was produced in several periods between c.1800 and 1920 estimated at 1.3 % Cu. Based on limited drilling, the deposit contains 0.2 Mt of ore. The deposit is not delimited, however. Average contents, based on surface sampling, are 1.3 % Cu and 3.8 % Zn. NGU Ore Database details can be found here.

Fredrik IV mine opened in 1707 and operated sporadically until 1908. There are several small operations in the area. The mine only worked for 30 years during its 200-year life. NGU sampling of the old dumps showed up to 10% Cu with silver values up to 30 gpt and gold values up to 4.7 gpt. NGU Ore Database details can be found here.

Folldal Mine (Hovedgruva) opened in 1747, and the first mining lasted until 1807. After that period, regular production was carried out in several periods until 1941. In total 1.15 mill.t. of ore with 1.9 % Cu and 1.1 % Zn was produced. The ore was very pyrite-rich and from 1907, pyrite was a very important product from this mine. The deposit is hosted by meta-basalt (locally pillowed), which is intruded by a large body of trondhjemite (dated to 488 Ma). The mineralization occurred in four separate lenses, of which the so-called main lens was the most important. The ore was mined to a depth of 600 m along plunge and 900 m along strike. The ore thickness was between 1-12 m (the main lens typically 3-12 m). NGU Ore Database details can be found here.

Nordre Geitryggen Mine produced 2.5 mill.t. of ore with 1.3 % Cu, 3.2 % Zn, 0.2 % Pb, 31 ppm Ag and 0.2 ppm Au, mainly between 1936 and 1970, and was the largest of the Folldal mines. The deposit is situated in banded chlorite schists, which are typical tuffitic rocks in the area. Thin lenses of felsic volcanics and volcaniclastics are inter-banded in the schists, as well as horizons of graphite schist. The ore zone has a strike length of 550 m, and was mined to a vertical depth of 550 m. The average ore thickness was 1.7 m but varied between 0.1 and 10.4 m because of folding. The ore was generally a banded pyrite-sphalerite-pyrrhotite-chalcopyrite ore with local enrichments of magnetite. The matrix was dominated by calcite and quartz. NGU Ore Database details can be found here.

Søndre Geitryggen Mine operated in the earliest periods 1770-1848 and 1860-1878, it was mined for copper in the eastern part of the deposit where the copper grades were the highest (stringer zone), while copper, zinc and pyrite were mined in the western zinc-dominated part in the last mining period (1952-1965). In total c. 0.5 Mt of ore grading 0.8 % Cu, 2.4 % Zn was taken out, and the mine had a strike length of 400 m and a vertical depth of 165 m. Mining ended because workers were needed in the new, large mine at Tverrfjellet, not because the deposit was mined out. The deposit is situated in the upper parts of a 20-50 m rhyodacite lens, in contact with overlying tuffitic schists. The main massive ore is a banded pyrite-sphalerite ore. NGU Ore Database details can be found here.

Nygruva Mine was in production in three periods from 1783 to 1952. In total 0.3 Mt ore was produced with 0.85 % Cu and 3.5 % Zn. The ruler-shaped deposit has a length of 680 m, width of 60-70 m and an average thickness of 3 m. Two normal faults cut across the deposit of which the westernmost one marks the end of the known deposit. Investigations (as late as in 1990) to find the continuation have not been successful. The massive part of the ore is a banded pyrite-sphalerite ore with lesser chalcopyrite and pyrrhotite in a quartz-calcite matrix. In the stratigraphic footwall of the massive ore are irregular lenses of zinc or copper-rich ore, which locally are enriched in gold (up to 7.1 gpt). NGU Ore Database details can be found here.

Kvikne Mine area was discovered in 1629 and was mined intermittently from 1632 to 1789 when mining ceased after major flooding. NGU estimate about 250,000 tonnes were mined grading 2.4% Cu and 1.8% Zn. The Kvikne deposits are closely associated with amphibolite. The deposits consist of several lenticular bodies, which have their long axes parallel to regional fold axes. NGU Ore Database details can be found here.

Røstvangen Mine operated between 1908 and 1920 when mining ceased because of the low copper price. NGU estimate About 388,000 tonnes of ore was produced containing on average 2.65 % Cu, < 1 % Zn, 43 % S and traces of Pb, with Ag and Au grades of 10 to 80 gpt and 0.3 to 2.0 gpt, respectively. The deposit consists of several small elongate, lenticular bodies, which all have their long axes parallel to regional fold axes. Unmined “reserves” of 100,000 are reported. NGU Ore Database details can be found here.

Borsjoho Deposits were explored between 1910 and 1920 by the same company operating Røstvangen Mine. Work ceased following the closure of Røstvangen Mine. There was a small amount of production from the Finnhaug lens from 1919 to 1921. In 1946 Bjørlkke (NGU) suggested 900,000 tonnes with 1.8-2.0% copper and at least 2 million tonnes of probable ore. Recent NGU comments suggest: “These estimates appear to be somewhat optimistic and based on flimsy data basis”. There are three lenses which plunge ESE at about 35°-45°. NGU Ore Database details can be found here and here.

Rødalen Deposit was mined in the period between 1750 and 1810. About 40,000 tonnes of copper ore were produced. Old reports describe the ore as 1-2 m wide ore zones rich in chalcopyrite and zones of massive pyrite and pyrrhotite. NGU Ore Database details can be found here.

Vardtjønna is the southernmost and in extent the largest of the mineralized zones in the Vingelen District. This area has a length of at least 1.2 km and a width of up to 130m. There are eight smaller showings in the area, of which five are associated with a major alteration zone of quartz-sericite schist. One of these, the Nedre Vardtjønnbekken is a small showing with the only known work being NGU sampling in 1989.

Flatskarvåsen showing was sampled by NGU in 1998. Sampling of the old dumps showed up to 4.2% Cu with gold values up to 4.8 gpt. NGU Ore Database details can be found here.

Vakkerlien Deposit was discovered by A/S Sulfidmalm (a Falconbridge Nickel Mines subsidiary) in late 1974. In 1977, after drilling 109 holes a resource of 400,000 tonnes grading 1.0% Ni and 0.4% Cu was calculated using a 0.4% Ni cut-off. The main host for the mineralization is a metagabbroic rock, partly ultrabasic surrounded by calcareous biotite-rich schists cross-cut by trondhjemitic veins. The main gabbro body has been sampled (1200m) parallel to the regional NW-SE lineation dipping about 20 ° SE. Extensive investigations were committed by Sulfidmalm A/S from 1974-1977, including geological mapping, geophysical, and drilling (>100 cores). Additional geophysical measurements and core extraction (101 cores, 3400m) were done by Folldal Verk A/S in the years 1991 and 1992. NGU Ore Database details can be found here.

Samples from the 2022 drilling were cut and sent for analysis. Preparation was at the Malå, Sweden ALS laboratory with analysis at the Loughrea, Ireland ALS laboratory. ALS Minerals is internationally recognized as the global leader in providing geochemical sample preparation, analytical procedures, and data management solutions, with its European hub lab based in Loughrea, Co. Galway. Playfair Mining uses a quality assurance/quality control (QA/QC) program that monitors the chain of custody of samples and includes the insertion of blanks, duplicates, and reference standards in each batch of samples sent for analysis. Drill core is photographed, logged, and cut in half with one half retained in a secured location for verification purposes and one half shipped for analysis. Sample preparation (crushing and pulverizing) is performed at ALS Geochemistry, an independent ISO 9001:2001 certified laboratory, in Malå, Sweden and pulps are sent to ALS Geochemistry in Loughrea, Ireland for analyses. The entire sample is crushed to 70% passing -2 mm and a riffle split of 250 grams is taken and pulverized to better than 85% passing 75 microns (PUL-31). Samples are analyzed by multi-acid (4-acid) digestion/ICP-MS Package for 48 Elements (ME-MS-61). Additionally, samples are analyzed for Au, Pt and Pd using a standard fire assay from a 30-gram pulp (PGM-ICP23). Overlimit sample values for silver (>100 g/t), lead (>1%), zinc (>1%), and copper (>1%) are re-assayed using a four-acid digestion overlimit method with ICP-AES (ME-OG62). No QA/QC issues were noted with the results reported herein.

The technical contents of this release were approved by Greg Davison, PGeo, a qualified person as defined by National Instrument 43-101. All metal values, mining production tonnages and geological dimensions reported herein are strictly historical in nature, were derived from third party sources compiled by NGU and pre-date NI 43-101 guidelines. The Company and its Qualified Person believe that the data will withstand scrutiny for inclusion and provides a conceptual indication of the property potential relevant to ongoing mineral exploration.