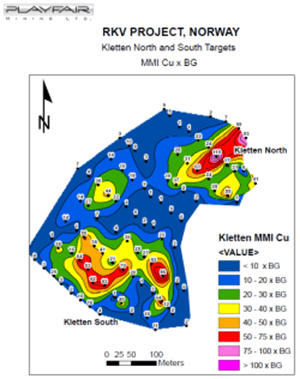 In the central part of the RKV Project, Playfair has discovered two significant MMI Cu anomalies at Kletten, as shown on the detailed map.

The Kletten North anomaly is open to the northeast, along the general strike of the principal geological units, and contains 4 values of MMI Cu greater than 50 times background in an area 125 metres long by 50 metres wide. The widest part of the anomaly is on the most northeasterly line and the anomaly limit has not yet been defined.

Approximately 300 metres to the south, along the regional strike, lies the Kletten South target, defined by 9 MMI Cu values greater than 50 times background. This sinuous anomaly occurs in an area of about 200 metres by 100 metres.

Kletten North and South correlate regionally with the significant copper occurrences at Børsjøhø located about 12 km to the southwest. As at Sæterfjellet, there is no record of any previous exploration work in the immediate area of the MMI Cu anomalies. 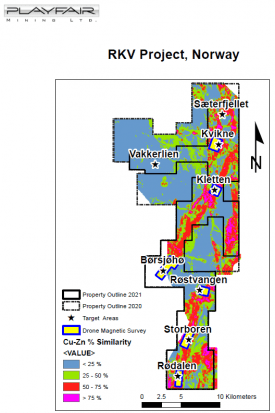 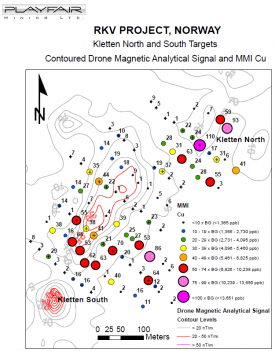 A detailed drone aeromagnetic survey was completed over the Kletten target area. The Kletten North and South target areas are located peripheral to and separated by a discontinuous series of north-easterly-trending, weak to moderate magnetic highs as illustrated on the detailed map. The MMI Cu target areas at Kletten clearly do not have a high magnetic signature. Of note, the known sulphide mineralization in the historic copper mines of Kvikne and Røstvangen, both located on strike-parallel, high similarity CARDS trends, are associated principally with pyrite which is non-magnetic.