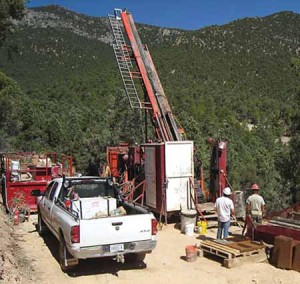 Pilot Gold Intersects 19.8 Metres of 2.30 g/t Gold, Extending Mineralization Over 2.2 Kilometres at Kinsley Mountain, Nevada
Pilot Gold (TSX:PLG) report that reverse-circulation (RC) step-out drilling at the Company’s Kinsley Mountain Project in northeast Nevada has returned up to 2.30 g/t gold over 19.8 metres on the western flank of the Kinsley Range, 550 metres northwest of the nearest historic pit. Additionally, a newly discovered zone of mineralization, Candland Canyon, was identified 250 metres east of historic mining operations. Mineralization at Kinsley Mountain now extends over a distance in excess of 2.2 kilometres and is interpreted to extend under cover to the north.

“These results are very significant because they change the complexion of the Kinsley Project and may indicate the presence of a widespread gold system that extends well beyond the limits of historical mining,” stated Matt Lennox-King, President and CEO.

Candland Canyon: This represents a new mineralized zone approximately 250 metres north of the easternmost pit, and will be followed up with additional drilling. Drilling returned:
Step-out holes: Drilling primarily located to the north and east of the main pit area, where core drilling by Pilot Gold in 2011 and 2012 returned up to 6.23 g/t gold over 8.7 metres in hole PK002C and 5.48 g/t gold over 20.4 metres in Hole PK014C (see news releases dated February 10 and July 16, 2012) returned:
Stratigraphic testing: The drill program also included a small number of holes extending through the known mineralized horizons and into underlying dolomite and limestone previously assumed to be unmineralized. Drilling in these units returned encouraging results, including:
All true widths are 30-100% of reported widths unless otherwise stated. All intervals of no sampling have been assigned zero grade for the purposes of compositing. For a comprehensive table of drill results to date, including new and non-reportable intercepts, please click: http://www.pilotgold.com/sites/default/files/KinsleyDrillResults1215.pdf

Regional program and other activities

In conjunction with the 2012 drill program regional exploration, data compilation and modeling, and environmental studies are underway. A Plan of Operations permit application was submitted to U.S. Bureau of Land Management (BLM) in June, which will allow for expanded drilling activities beyond the previously disturbed areas.

The regional mapping and sampling program has identified a large number of new structures that host jasperoid alteration, a hallmark of Carlin-style sediment-hosted mineralization. Jasperoid alteration can be found within mineralization, but commonly extends to areas above, and lateral to, mineralization. Jasperoids highly enriched in the gold-associated pathfinder elements such as arsenic, antimony and thallium have been recognized up to eight kilometres north of the mine. At the completion of the regional program, drill targets in these areas will be selected. Jasperoid samples from closer to the mine in strata interpreted as immediately overlying mineralized horizons at the mine have returned up to 3.34 g/t gold.

For a map of surface sampling results, click here: http://www.pilotgold.com/sites/default/files/KinselySurfaceSamplingMap1215.pdf

Moira Smith, P. Geo., Pilot Gold Chief Geologist, is the company’s designated Qualified Person for this news release within the meaning of National Instrument 43-101 Standards of Disclosure for Mineral Projects (“NI 43-101”) and has reviewed and validated that the information contained in the release accurate. Drill composites were calculated using a cut-off of 0.30 g/t. Drill intersections are reported as drilled thicknesses. True widths of the mineralized intervals are interpreted to be between 30-100% of the reported lengths. Drill samples were assayed by ALS Chemex (ISO9001:2000) in Reno, Nevada for gold by Fire Assay of a 30 gram (1 assay ton) charge with an AA finish, or if over 5.0 g/t were re-assayed and completed with a gravimetric finish. For these samples, the gravimetric data were utilized in calculating gold intersections. QA/QC included the insertion and continual monitoring of numerous standards and blanks into the sample stream, and the collection of duplicate samples at random intervals within each batch. Selected holes are also analyzed for a 72-element geochemical suite by ICP-MS. Data citing ounces mined from historical production is attributed to www.metalseconomics.com.

The Company has been informed that the Turkish Ministry of Environment and Urban Planning (the “Ministry”) has been served a legal petition by certain claimants in Turkey to annul the Ministry’s recent approval of a baseline Environmental Impact Assessment report (the “EIA”) prepared in relation to the Halilaga copper-gold project in Turkey. The EIA contemplates a small-scale copper-gold test mining scenario as part of an ongoing effort to advance understanding of the project.

The petition allegedly filed with the Canakkale Administrative Court (the “Court”) names the Ministry as the respondent and does not name Truva Bakir or its shareholders. The petition also purportedly requests suspension of any activities contemplated in the EIA by way of an interim decision to be granted by the Court.

The Company believes the petition is without merit, and even if the petition is successful, and the EIA is annulled, the ability to continue the planned 2012 exploration program on Halilaga is unaffected. Should the EIA be annulled, the shareholders of Truva Bakir would revisit the EIA process in order to address identified issues, and update for the result of ongoing economic and environmental studies. The Company has also been advised that there is no direct threat to the underlying tenure on the licenses that comprise Halilaga.