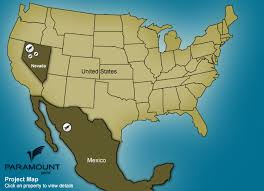 Paramount Gold and Silver Corp. (NYSE MKT:PZG) (TSX:PZG) and Coeur Mining, Inc. (NYSE:CDE) have entered into an agreement and plan of merger, dated as of December 16, 2014 pursuant to which Coeur will acquire all of the issued and outstanding shares of common stock of Paramount and the San Miguel Project. As a condition to closing the Merger, the shares of Paramount’s subsidiary holding its Nevada mining assets will be spun-off to holders of the Company’s common stock.

Pursuant to the Merger Agreement, Coeur will acquire each share of outstanding Paramount common stock from Paramount’s stockholders in exchange for 0.2016 of a share of Coeur common stock. In addition, Paramount stockholders will receive their pro rata share of the outstanding shares of an existing subsidiary or a newly incorporated subsidiary of Paramount. SpinCo will hold Paramount’s interest in the Sleeper Gold, Mill Creek and Spring Valley Projects in Nevada and will be capitalized with $10 million in cash from Coeur. Upon completion of the Merger, Paramount stockholders will hold, in aggregate, a 95.1% interest in SpinCo and Coeur will hold the remaining 4.9%.

The Exchange Ratio represents an implied value of $0.90 per share of Paramount common stock based on the 20-trading day volume weighted average price (“VWAP”) of Coeur common shares of $4.47 on the New York Stock Exchange (“NYSE”), and an implied 19.8% premium based upon Paramount’s and Coeur’s 20-trading day VWAP ($0.75 and $4.47 respectively), before ascribing any value to SpinCo. Upon completion of the Merger, Paramount stockholders will own approximately 32.7 million shares of Coeur representing approximately 24% of the outstanding shares of Coeur common stock. The implied transaction value, before ascribing any value to SpinCo, is approximately $146 million.

Speaking in support of the transaction, Paramount CEO, Christopher Crupi said: “This transaction unlocks the value we have created in San Miguel for our stockholders, by trading this asset for a substantial ownership in the major producer best able to maximize its value. We expect San Miguel to make a significant contribution to the future success of Coeur and Paramount stockholders will be able to share in this success as owners of Coeur. This transaction also provides Paramount stockholders with an opportunity to share in further value creation as owners of SpinCo, which we expect to be named Paramount Nevada Gold. Our plan for SpinCo is to continue the Paramount strategy of developing assets through exploration and engineering, and selling or partnering these assets with established producers. Our focus will be on gold assets in Nevada, anchored by the advanced Sleeper Gold Project which already has a large resource base and a low capital and operating cost profile.”

In addition to stockholder approvals, the proposed transaction will be subject to applicable regulatory approvals and the satisfaction of certain other customary conditions, including approval of the Mexican Federal Economic Competition Commission. The Merger Agreement includes customary provisions, including covenants not to solicit other acquisition proposals, rights to match any superior proposals and termination fees payable in certain circumstances.

Paramount and Coeur entered into a royalty agreement whereby Coeur paid $5.25 million to Paramount for a 0.7% net smelter returns royalty in respect of the San Miguel Project.

Paramount has retained Scotia Capital (USA) Inc. to act as its financial advisor, and jointly LeClairRyan and Gowling Lafleur Henderson LLP are acting as legal advisors to Paramount.

The San Miguel Project consists of over 100,000 hectares (over 247,000 acres) in the Palmarejo District of northwest Mexico, making Paramount the largest claim holder in this rapidly growing precious metals mining camp. The San Miguel Project is ideally situated near established, low cost production where the infrastructure already exists for early, cost-effective exploitation. A second Preliminary Economic Assessment (PEA) for San Miguel was completed and announced on August 25, 2014.

The Sleeper Gold Project is located off a main highway about 25 miles from the town of Winnemucca. In 2010, Paramount acquired a 100% interest in the project including the original Sleeper high-grade open pit mine operated by Amax Gold from 1986 to 1996 as well as staked and purchased lands now totaling 2,570 claims and covering about 47,500 acres which stretch south down trend to Newmont’s Sandman project. This acquisition is consistent with the Company’s strategy of district-scale exploration near infrastructure in established mining camps. A PEA was completed for Sleeper and announced on July 30, 2012.