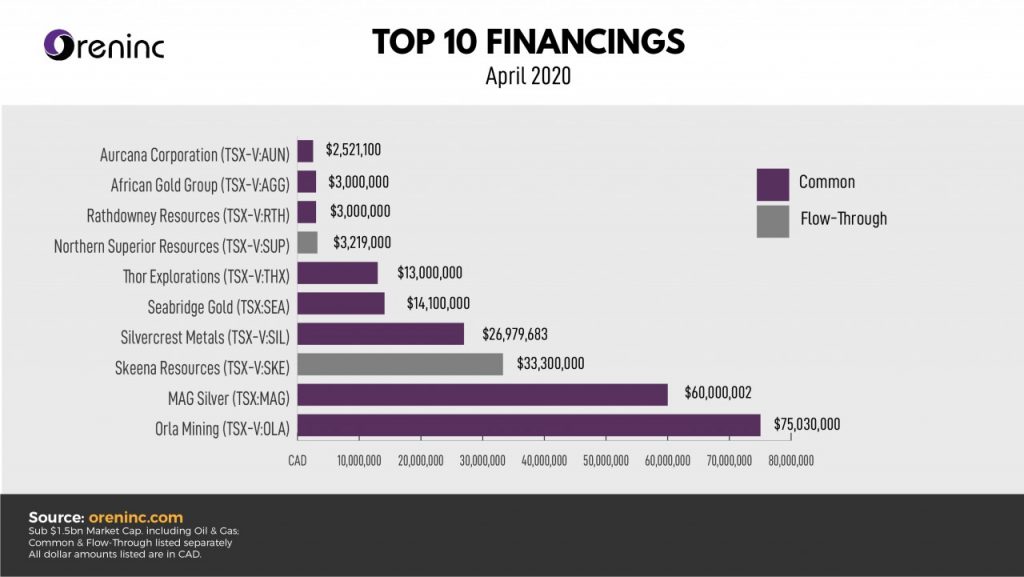 Gold accounted for six of the top ten largest financings closed in Canadian capital markets in April, with silver collecting three spots and zinc one. The top ten deals closed aggregated $234.1 million a 97.1% increase from the $118.8 million closed in March, and representing 86.1% of the $272.0 million in deals closed, with six deals over $10 million. Orla Mining led the way with a $75 million financing followed by MAG Silver ($60 million) and Skeena Resources ($33.3million).

Oreninc gives an honourable mention to SilverCrest Metals (TSX:SIL) which narrowly missed the top by raising a tad too much money when its $75 million private placement was upsized to $101 million and above the threshold of financings we count. SilverCrest then raised another $27 million when strategic investor SSR Mining (TSX:SSRM) exercised its pro-rata rights to bring the total to $128 million. Impressive stuff.

Orla led the gold rankings with $75 million raised in April, followed by Skeena Resources ($33.3 million) and Seabridge Gold ($14.1 million). The top ten yellow metal financings aggregated $148.4 million a 47.7% increase from the $100.5 million closed in March, and accounting for 54.6% of the total closed, with four financings of more than $10 million.

Base metals deals continued to generate market interest away with the top financings closed raising $8.8 million in April, although this was 49.1% more than the $5.9 million raised in March, representing just 3.2% of the total. Rathdowney Resources led the way at $3 million, with only four financings for more than $1 million.