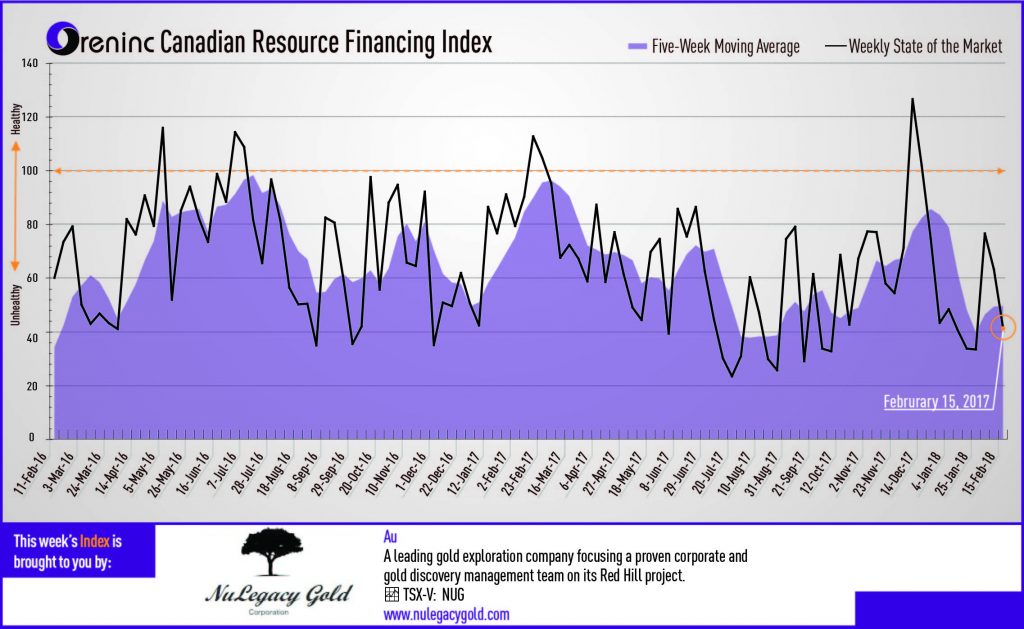 NuLegacy Gold (TSXV:NUG) plans to begin a ~12,000m drilling and field exploration program in March with a budget of C$5.0 million.

The Oreninc Index fell in the week ending February 16th, 2018, with the index falling to a paltry 25.57 from 63.24 a week ago as financings all but dried up. British Columbia being closed for Family Day had an impact but the broader picture could be that recent volatility in general stock markets and metal prices has caused a blanket of caution to descend on investors and issuers, prompting companies to delay financings.

Several market commentators have commented that mining stocks have not responded (grown) in line with increases in metal prices. This could also be a factor behind the dearth of financings announced. Indeed, Oreninc data shows that this is a worst run up for financings to the PDAC conference in March than seen throughout the bear market years with a five-week index average of 46.5 compared to 130.22 in 2011 and 42.45 in 2016.

The stock market correction saw the VIX fear index spike to a record high as the spectre of inflation now stalks the US with January inflation coming in higher than expected at 2.1%. Consequently, yields on the US ten-year treasury have started climbing as the US dollar fell to a three-year low. The recent stock market sell-off saw gold take a big hit but then rapidly reclaim its losses, rebounding back to the US$1,350/oz level.

NuLegacy Gold (TSXV:NUG) plans to begin a ~12,000m drilling and field exploration program in March with a budget of C$5.0 million.

Continued emphasis on the discovery of new, additional gold zones on its Red Hill property.

2017 exploration resulted in the discovery and significant expansion of Carlin-style gold mineralization in the new Serena zone, discovered a new epithermal-type gold mineralized zone (the VIO zone) on the western end of the Red Hill property,

Having completed a successful and productive exploration program in 2017, the company plans to continue where it left off in its pursuit of discovering new gold mineralisation. At the same time, it will continue advancing metallurgical and other studies to move towards assessing the economic viability of the project. The near term will see NuLegacy publish a maiden NI 43-101 compliant resource estimate that will cover about 35% of the 3km strike length of the Iceberg deposits.