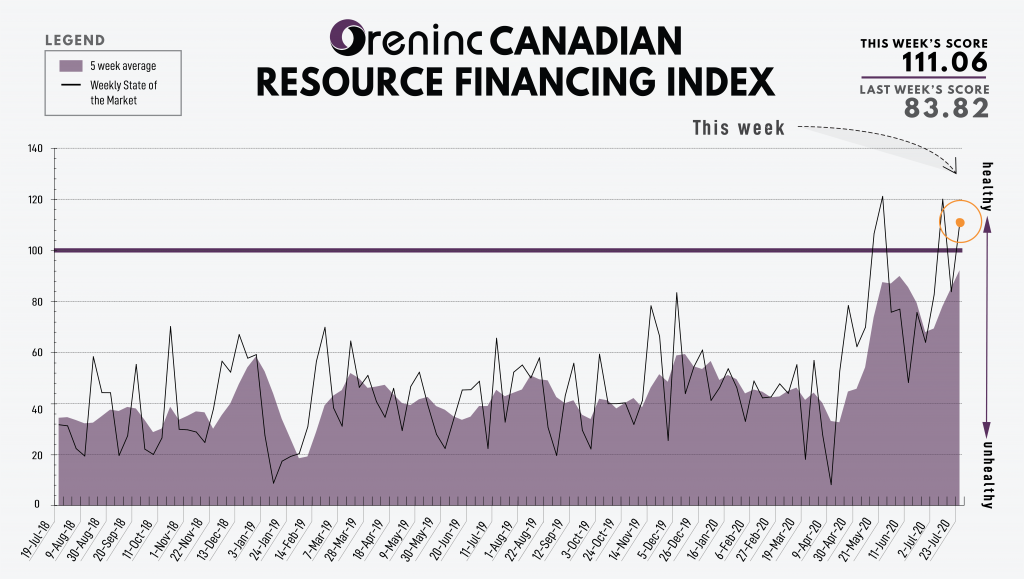 Another exceptional week for Canadian junior mining financings as the Oreninc Index increased in the week ending July 24th, 2020 to 111.06 from an updated 83.82 a week ago as eleven brokered deals were announced.

The COVID-19 virus global death toll has reached 634,000 and 15.6 million cases reported worldwide. The disease is hitting its stride in the Americas with cases in Brazil surging and Texas reporting its largest daily death.

The gold spot price broke US$1,900/oz on Friday, its highest level since September 2011, the last time it reached this mark, as geopolitics increasingly weigh-in on the global economic situation caused by the COVID-19 pandemic. For its part, silver passed $20/oz for the first time since 2016 in a good week for precious metals. Silver topped $23/oz, marking an increase of more than 94% from its bottom under $12/oz in March.

The deterioration in US-China relations has reached the level of consulate closures with China ordering the US to shutter its consulate in Chengdu following the US ordering China to shutter its Houston consulate, accusing China of stealing intellectual property. China is especially aggrieved by what it deems Western interference in its region of influence including a critical reception of the implementation of a new security law in Hong Kong, and the US, Australia and UK sending warships to the disputed South China Sea on freedom of navigation missions.

In the US, gold shrugged off positive new home sales figures which increased 13.8% in June according to Commerce Department figures compared to a 4% expectation. New home sales were at a seasonally adjusted annualized rate of 776,000 homes while May’s figures were revised upwards to 682,000.

European Union leaders agreed a €750 billion coronavirus pandemic recovery fund following a long-weekend of debate at its longest summit in nearly two decades. Under the deal, the EU will jointly borrow debt to be disbursed through grants and low interest loans. All expenditure must be consistent with the greenhouse gas targets of the Paris Agreement. Europe’s economy is also starting to recover from the COVID-19 slump with purchasing managers indices showing expansion in services and manufacturing.

People are buying homes, but they also continue to lose their jobs. Initial weekly jobless claims rose 109,000 to 1.4 million this past week, according to Labor Department data, more than the 1.3 million forecast by economists, with the four-week moving average falling to 1.36 million. Continuing jobless claims fell by 1 million to 16.2 million while the four-week moving average fell to 17.5 million.