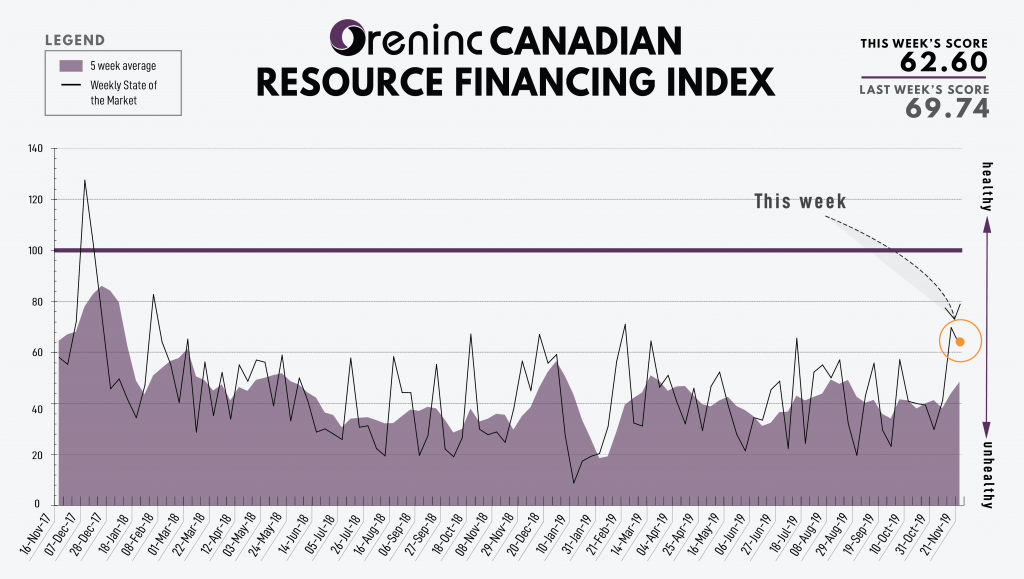 The Oreninc Index pulled back in the week ending November 22nd, 2019 to 62.60 from an updated 69.74 a week ago as brokered deals dried up although total aggregate dollars increased.

With investors starting their tax-loss selling, some junior stocks are beginning to get pounded, which for the contrarians means it is bargain-hunting time.

The gold price continued to try and mount a recovery from its recent sell-down but ended the week ceding ground. The general stock markets also continue to ride high unphased by the apparent lack of progress and even stagnation in trade talks between the US and China. The minutes from the October Federal Open Market Committee meeting indicated it is unlikely there will be further interest rate cuts in the US for the remainder of the year as several FOMC members now have an optimistic view of the US economy.

A relatively quiet week in the US news cycle as it continued its focus on the House of Representative impeachment hearings of President Donald Trump and one crowned when the president called into the Fox & Friends TV show on Friday for a 55-minute download of what he thinks of things.

As the UK prepares for a general election in mid-December, both main parties—the incumbent Conservatives and opposition Labour—have unveiled plans to significantly increase public spending which signal an end to the era of austerity. Labour, in particular, has planted a vision of increased spending on healthcare and homes, but also the renationalisation of utilities and rail companies.

Colombia is the latest Latin American country to experience mass protests against an ineffectual government, although not on the scale and without the level of violence which protests in other countries have seen.

In Bolivia, police have used live ammunition to quell protests by groups of largely indigenous people. Interim president Jeanine Añez has called for new elections in which ousted president Evo Morales said he would not run.