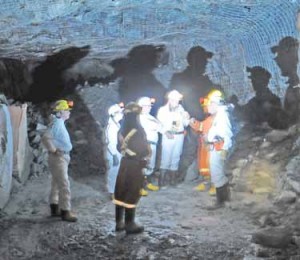 All figures are in Canadian dollars except where noted.

The first tranche included the issuance of 8,668,009 flow-through shares at a price of $1.155 per share, representing a 2% premium to the relevant market price. The market price was defined as the simple average of the five daily VWAPs on the TSX for the five trading day period between June 10, 2013 and June 14, 2013.

100% of the gross proceeds from the private placement will be used for eligible mine expansion expenditures and exploration activities at the LDI mine and property in Ontario that constitute “Canadian exploration expense” as defined in the Income Tax Act (Canada).

The shares will be registered in the United States for resale on the NYSE MKT via a resale prospectus supplement to the Company’s shelf registration statement on Form F-10. Resales in Canada will be restricted for four months. Not more than a total of 9.99% of the total issued and outstanding shares will be issued pursuant to the first and second tranches collectively.

This news release shall not constitute an offer to sell or the solicitation of an offer to buy, nor shall there be any sale of these securities in any jurisdiction in which the offer, solicitation or sale would be unlawful. The securities being offered have not been approved or disapproved by any regulatory authority, nor has any such authority passed upon the accuracy or adequacy of the prospectus supplement, the base shelf prospectus or the shelf registration statement. The second tranche of the offering is subject to the approval of the TSX and the NYSE MKT.

NAP is an established precious metals producer that has been operating its flagship Lac des Iles mine  located in Ontario, Canada since 1993. LDI is one of only two primary producers of palladium in the world, and is currently undergoing a major expansion to increase production and reduce cash costs per ounce.