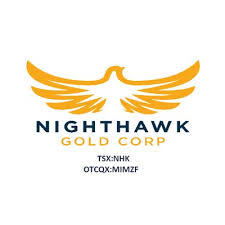 Drilling at Cass (Figure 1 and 2) tested the western extension of the known historical mineralization. Two distinct lenses within the favourable host were identified, encountering higher grades and good widths locally. These new lenses added a combined 250 metres of mineralization and may be indicative of other potential lenses that may exist further west and to the north where additional drilling is warranted.

Drilling at Albatross consisted of widely spaced drillholes to test the possible continuation of the Cass trend over a strike length of 4.6km west of the Cass Zone, (Figure 1). Drilling at this greenfield target aimed to identify favourable rock types, alteration and mineralization along strike and below existing surface grab samples (which ranged up to 20.60 g/t Au), with one notable intersection demonstrating significant alteration and mineralization over good widths and confirmed the existence of a new mineralized zone.

Keyvan Salehi, President & CEO commented “We are very pleased with the results received to-date from this highly prospective area.  Drilling has added an additional 250 m of near-surface mineralization which is expected to significantly impact the resource at Cass and demonstrates that the Cass trend extends well into Albatross with some exceptional gold values. This area continues to impress especially when you take into consideration, the potential for other mineralized lenses, and that Cass remains open to the west, coupled with the discovery of new mineralization within the Albatross target area (approximately 1km west of Cass). We are encouraged that additional drilling in this area could potentially uncover new mineralized zones that carry higher grades than the current camp average, and hence deliver quality ounces to the project.”

Additional results remain pending from a series of deeper holes drilled below the central Cass zone. The Albatross discovery demonstrates the gold potential proximal to the Kim and Cass zones and could eventually contribute to the near-surface resources of the project. Follow-up drilling in this area is anticipated and will be planned once all results are processed in preparation for the 2022 drill program.

A total of twenty-nine drillholes totaling 5,269 metres tested the western extension of the Cass mineralization as identified by historical drilling. Results reported today identified two distinct lenses within the favourable host that appear either offset towards the north or following an en-echelon geometry (Figure 1 and 2). Higher grades and good widths were demonstrated by holes CM21-22 which returned 1.49 g/t Au over 32.00 m, including 3.37 g/t Au over 10.50 m, CM21-36 which returned 3.21 g/t Au over 20.50 m, and CM21-37 which returned 5.08 g/t Au over 9.00 m. These two new lenses have added a combined 250 m of mineralization and the en-echelon stacking may point to other possible lenses further west and north of the current holes.

At Albatross, twelve widely spaced drillholes totaling 4,059 m were drilled to test the Cass trend (previously referred to as the Albatross trend which has now been confirmed as a continuation of the Cass trend) over a strike length of 4.6km to the west of Cass (Figure 1). The objective of this first pass of scout holes was to identify favourable rock types, alteration, and mineralization along strike and below existing surface grab sample results obtained from previous surface exploration work ranging up to 20.60 g/t Au. One notable intersection demonstrated significant alteration and mineralization over good widths. Hole A21-02 intersected a sheared and mineralized mafic volcanic hosting significant quartz veining over 14.00 m. Assays from this zone returned 1.37 g/t Au over 14.00 m, including a higher-grade portion which returned 5.37 g/t Au over 2.00 m at the lower contact of the zone. Hole A21-02 is located 1km west of Cass and remains open in all directions.

The Cass trend extension on Albatross also returned significant gold values in holes A21-07 and A21-08 located more than 2km west of hole A21-02. Although not as wide as the discovery hole, these intersections validate the Cass trend model as an important mineralized corridor. Additional drilling is required to prove out this area and its full potential, but early indications demonstrate a highly mineralized area with a lot of room for additional growth both along strike and potentially to depth.

Richard Roy P.Geo., V.P. Exploration of Nighthawk, who is the “Qualified Person” as defined by NI 43-101 for this project, has reviewed and approved of the technical disclosure contained in this news release.

Nighthawk is a Canadian-based gold exploration company with 100% ownership of a district-scale land position within the Indin Lake Greenstone Belt, located approximately 200km north of Yellowknife, Northwest Territories, Canada. Within this largely under explored Archean gold camp, the Company has identified a number of high-priority targets all centred around a growing deposit. These targets lie within large regional deformation zones that contain gold mineralization which warrant additional exploration and follow-up. The main goals and objectives over the next 6-12 months will be to carry out exploration to foster resource expansion opportunities as well as new, near-surface discoveries that support the global mineral resource base. 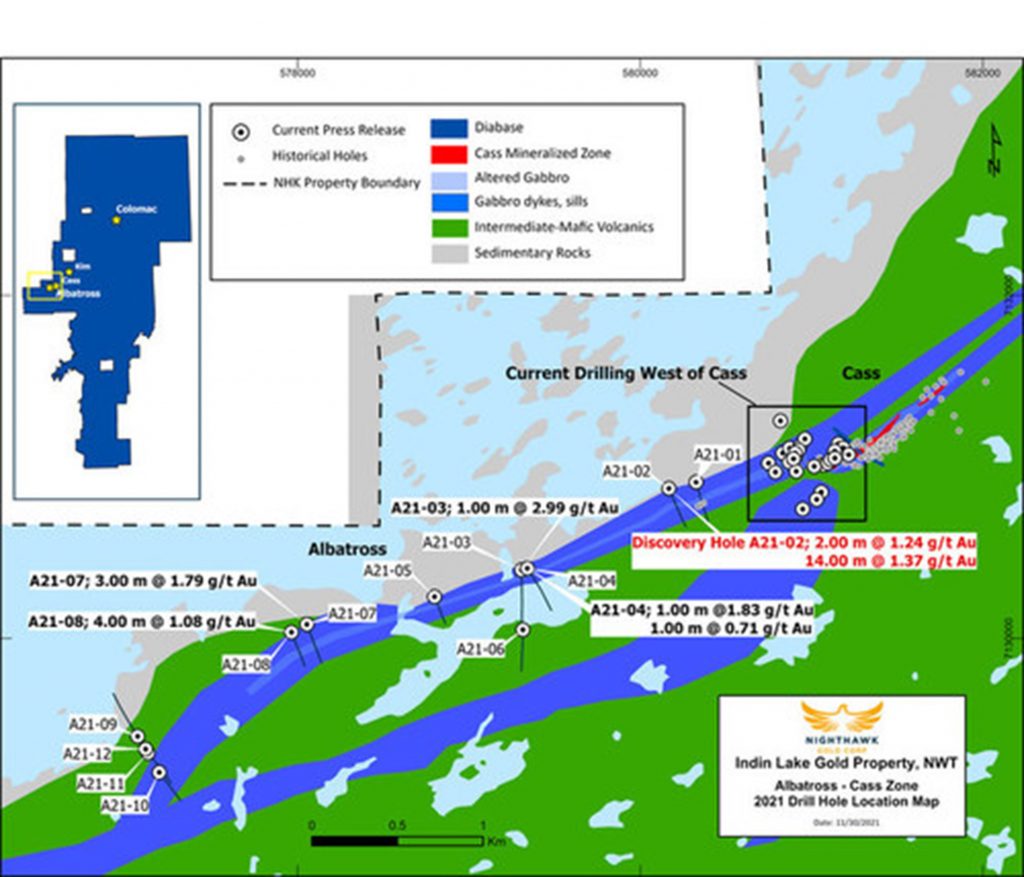 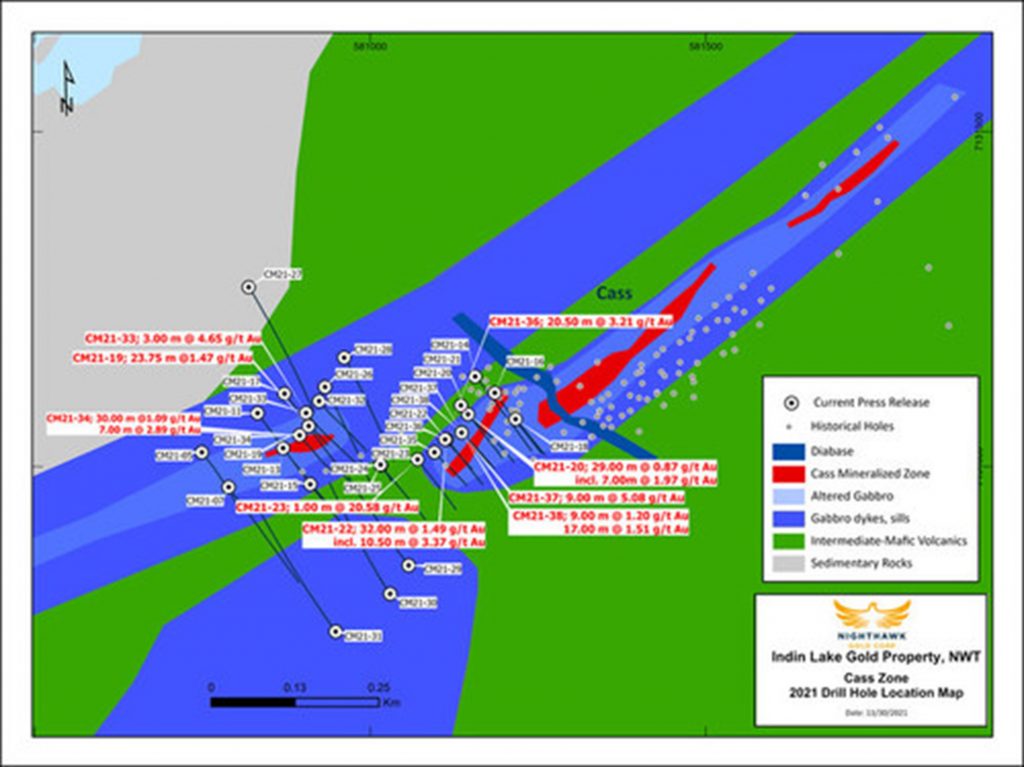 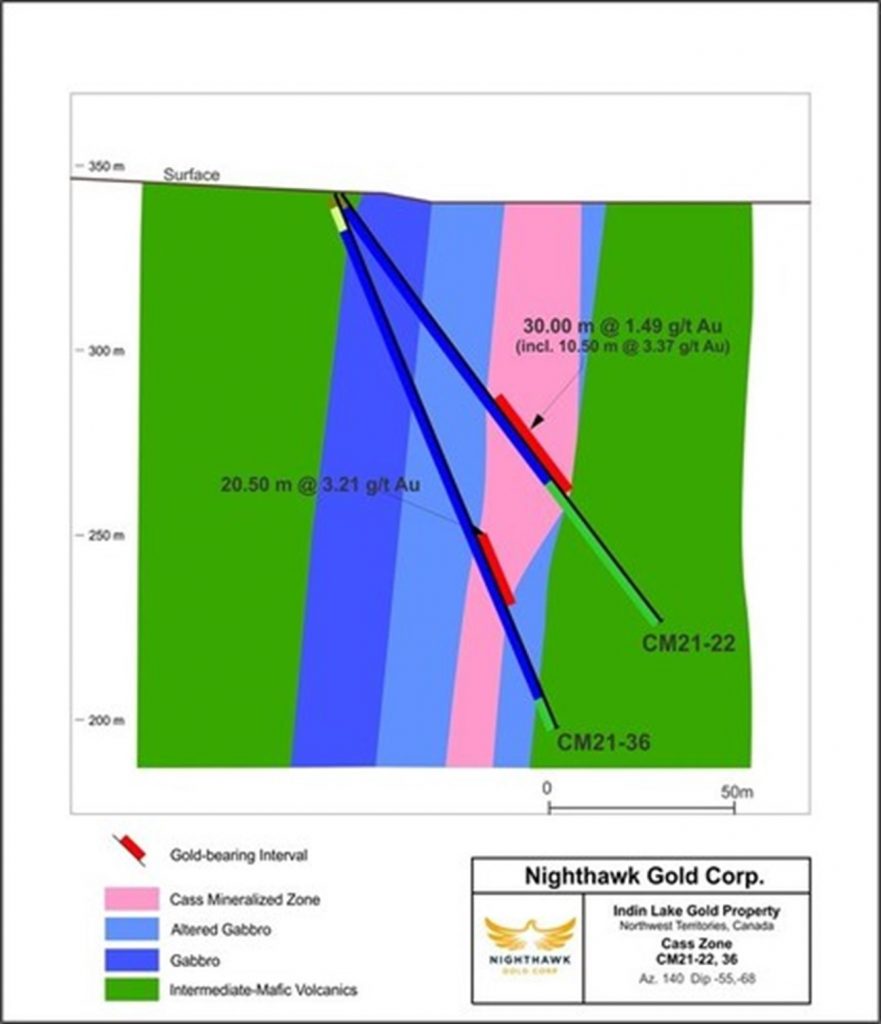