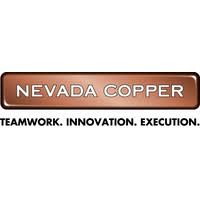 Nevada Copper Corp. (TSX: NCU) is pleased to announce that the underwriters in the Company’s previously-announced public offering of units of the Company at a price of $0.15 per Unit elected to exercise their over-allotment option in full to purchase additional Units. The Over-Allotment Option closed and resulted in an aggregate of 23,790,000 Units being issued at the Offering Price for aggregate gross proceeds of approximately $3.6 million. Including the proceeds from the Over-Allotment Option, an aggregate of 667,503,553 Units were issued in the Offering for total aggregate gross proceeds of approximately $100 million.

Nevada Copper is a copper producer and owner of the Pumpkin Hollow copper project. Located in Nevada, USA, Pumpkin Hollow has substantial reserves and resources including copper, gold and silver. Its two fully permitted projects include the high-grade underground mine and processing facility, which is now transitioning to the production stage, and a large-scale open pit project, which is advancing towards feasibility status.