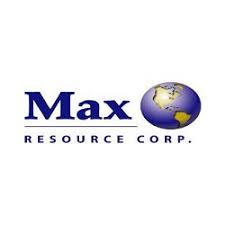 MAX RESOURCE CORP. (TSX-V: MXR) (OTC PINK: MXROF) (FSE: M1D2) is pleased to report it has entered into a Letter of Intent, through its wholly-owned subsidiary, PGE Americas Metals Corp. to acquire 100% of the EBAY Palladium Project located 30-km SE of Matagami in the Abitibi Region of Quebec, Canada. It is underlain by the Archean Bell River Complex, a layered mafic intrusion measuring 65-km by 15-km and 5-km thick. Excellent access to the Project is via a network of logging roads and trials.

Highlight results from historic exploration between 2000 to 2008 include:

The Company cautions investors that grab samples are selected samples and are not necessarily representative of mineralization hosted on the Project. The Company also cautions investors it has not yet verified any of the historical exploration information (Refer to Hinterland Metals AR 2005, October 10 & 17, 2006 News Releases; drill results from Hinterland Metals November 21, 2006, March 13, 2007 & April 10, 2008 News Releases).

“The current palladium price of US$1,550 per/oz is seven-times the 2003 price of US$201 and the current US$5,500 per/oz rhodium price is eleven-times the 2003 price of US$476, making the EBAY project an excellent exploration project for our wholly-owned subsidiary, PGE Americas Metals Corp.,” Max CEO, Brett Matich, commented. “The EBAY team plans to initiate an exploration program, followed by drilling and, at the same time, the CESAR Phase II field program in Colombia continues to expand Max’s exposure to copper and silver markets,” Mr. Matich concluded.

The Company has entered into a non-binding LOI, paying a $25,000 non-refundable deposit for a 60-day exclusive right to acquire 100% of the EBAY Palladium Project. It can exercise the option by:

(i) Executing the Agreement on or before the expiry of the exclusive option period;

(ii) Issuance of 2,950,000 common shares of Max upon TSX Venture Exchange (“Exchange”) approval of the Agreement;

(iii) Completing the minimum expenditures to maintain the EBAY claims in good standing by October 1, 2020; this amount shall be deducted from second anniversary expenditure amount;

(iv) Payment of $25,000 cash, the issuance of common shares of Max equal to the cash amount of $75,000, calculated as below, on or before the first anniversary date of closing the transaction;

(v) Payment of $25,000 cash, the issuance of common shares of Max equal to the cash amount of $75,000, calculated as below, and total aggregate of $600,000 in expenditures on or before the second anniversary date of closing the transaction; and

Upon acquisition of 100%, interest in the Project, the Company will grant a 2.0% net smelter royalty to the vendor. The Company has the right to purchase one-half of the Royalty for $1,000,000.

The issuance of common shares of Max is to be equal to the cash consideration, calculated by the share price based on the volume weighted average price of the shares over the 30-day period prior to the share issuance.

The Agreement is subject to acceptance and approval by the Exchange. All shares issued pursuant to the Agreement shall be subject to a four-month and one-day hold period.

“PGE Americas Metals Corp.” was recently formed by Max as a wholly-owned subsidiary, to hold its PGE Choco Project. This was the first step towards building a portfolio of PGE assets with a focus on palladium, platinum and rhodium. The intent is to unlock this value in a timely manner (refer to news release February 25, 2020).

The PGE Choco project is located 120-km SW of Medellin Colombia, within a district with historical production of 1.0Mozs of platinum and 1.5Mozs of gold (1906-1990) by Choco Pacific Mining. Compilation of historical records revealed the potential for related PGE’s particularly palladium and rhodium. In addition, recent field work in 2019 by Max resulted in concentrate values of 114 g/t platinum and 341 g/t gold (refer to news release April 16, 2019).

Colombia was the world’s main source of platinum until 1820 and was world’s largest producer between 1917 and 1923. Source: R.J. Fletcher and Associates (2011) Review of Gold and Platinum Exploration and Production in Choco Province Colombia Part 3. Private Report for Condo to Platinum NL.

Further, the AM South discovery is located 40-km SSW along the same mineralized trend, where mineralized structures totaling over 5-km of strike. Rock chip sampling from 0.1 to 25-metre intervals returned highlight values of 5.4% copper and 63 g/t silver.

Max, a mineral exploration company with an experienced and successful management team, is focused on advancing its copper, silver and precious metals landholdings in the rich mineral belts of Colombia, and it’s PGE (palladium, platinum, rhodium) landholdings with potential for the discovery of large-scale mineral deposits that can attract major partners.

Tim Henneberry, P Geo (British Columbia), a member of the Max Resource Advisory Board, is the Qualified Person who has reviewed and approved the technical content of this news release on behalf of the Company.