The Company has now received all assay results for 2022 drilling to-date at Douay, which included 11 drillholes plus two drillhole extensions for approximately 7,800 metres. An additional ~10,000 m of drilling has been completed at the Eagle and Telbel mine areas with assays pending.

Highlights from the H1/2022 Exploration Drilling at Douay:

“The Company understands that step-out and discovery drilling may be inherently higher risk than infill drilling, but the reward can be game-changing on successes,” stated Fred Speidel, VP Exploration of Maple Gold. “With that in mind, the Company views the H1/2022 drilling results at Douay as positive from an exploration perspective, particularly regarding sediment-hosted gold mineralization north of the Casa Berardi North Fault, where there is still only very limited drilling: there is a drilling gap of over 7 km between the NW Zone and NE IP target, and multiple drilling gaps of up to approximately 700 m adjacent to the Central Zone. In addition, the H1/2022 drilling campaign also confirmed depth continuity of the intrusive-hydrothermal gold system at Douay; we look forward to initiating the 10,000 m deep drilling program at Douay in the coming weeks.”

The NE IP Target clearly stands out as a cluster of sediment-hosted gold anomalies, including several intervals above 1 g/t Au (see Figure 1 below). This is consistent with a kilometric sulfide system originally defined by geophysics, and now confirmed by drilling. Seven holes have been drilled so far over a strike distance of approximately 1.2 km; the system is open to the WSW, ENE and to depth. Multi-element assays are pending and will provide data for additional vectoring for subsequent drilling in this area.

Similarly, the current Central Zone conceptual pit only covers approximately 350 m of strike along the Casa Berardi North Fault, but known gold mineralization occurs over at least 1,400 m, open to the east and to the west (Fig. 1). There are several drilling gaps, notably a gap of 700-800 m to the east and about 700 m to the NW, and in general drill spacing in this area is between 100-200 m.

At Nika, the 9.8 g/t Au over 1 m intercept in DO-22-322A occurs approximately 250 m below base of pit and also about 310 m below the original discovery hole (DO-18-218, see press release of May 14, 2018). This discovery intercept, and a later even better intercept (DO-21-282X, see press release of May 26, 2021), form the core of the Nika Zone. There is no further drilling beneath or adjacent to DO-22-322A. Nika and the western part of the Porphyry Zone are currently interpreted to form the center of the Douay intrusive-hydrothermal gold system and upcoming deeper drilling will test for potential feeders in this area. 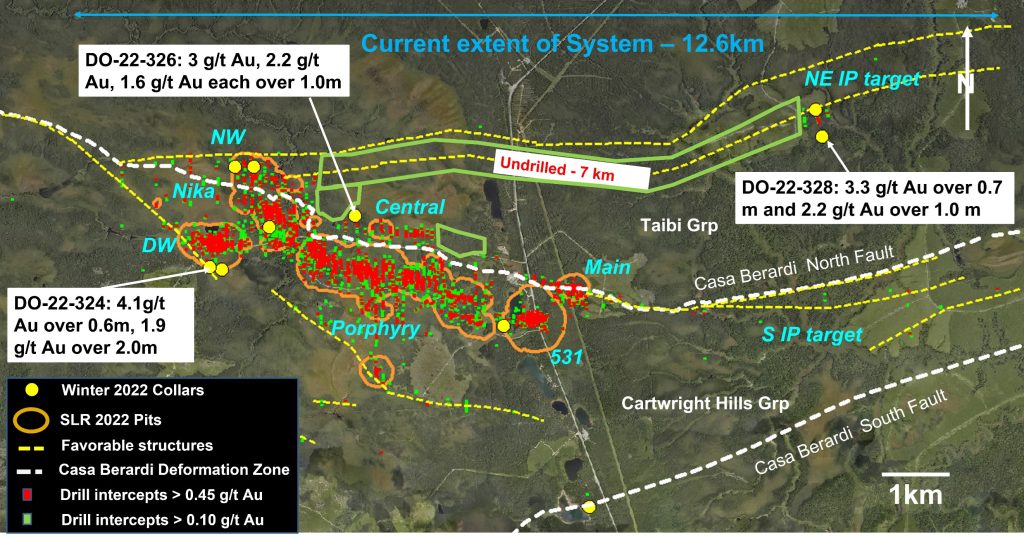 All reported intercepts are downhole core lengths. Holes started in December 2021 and completed in January 2022 are not reported here. Given the nature of these holes, true widths are not known but are estimated to be 70-90% of downhole lengths.

The JV implements strict Quality Assurance and Quality Control protocols at Douay covering the planning and placing of drill holes in the field; drilling and retrieving the NQ-sized drill core; drillhole surveying; core transport to the Douay Camp; core logging by qualified personnel; sampling and bagging of core for analysis; transport of core from site to the Val d’Or, QC, ALS laboratory; sample preparation for assaying; and analysis, recording and final statistical vetting of results. For a complete description of protocols, please visit the Company’s QA/QC page on the website.

Maple Gold Mines Ltd. is a Canadian advanced exploration company in a 50/50 joint venture with Agnico Eagle Mines Limited to jointly advance the district-scale Douay and Joutel gold projects located in Québec’s prolific Abitibi Greenstone Gold Belt. The projects benefit from exceptional infrastructure access and boast ~400 km² of highly prospective ground including an established gold resource at Douay (SLR 2022) that holds significant expansion potential as well as the past-producing Eagle, Telbel and Eagle West mines at Joutel. In addition, the Company holds an exclusive option to acquire 100% of the Eagle Mine Property.

The district-scale property package also hosts a significant number of regional exploration targets along a 55 km strike length of the Casa Berardi Deformation Zone that have yet to be tested through drilling, making the project ripe for new gold and polymetallic discoveries. The Company is well capitalized and is currently focused on carrying out exploration and drill programs to grow resources and make new discoveries to establish an exciting new gold district in the heart of the Abitibi.