Lion One Metals Limited (TSX-V: LIO) (ASX: LLO) (OTCQX: LOMLF) (FSX: LY1) announces that a surface sample of 502 g/t gold over 0.70 metres has been returned from the Jomaki prospect 1 km from the planned mill site at its 100% owned and fully permitted Tuvatu Gold Project, now in the development stage, located on the island of Viti Levu in the Republic of Fiji.

The high grade assay result was returned from bench sampling, and extends the Jomaki prospect, located 1,300 metres south-west of the main mineralized zone at Tuvatu, and 1 km south-west of the planned mill site. The Jomaki prospect consists of a zone of closely spaced veins that have been mapped over a strike length of 400 metres which remain open to the north and south. This new sample was taken 21 metres east of a previously collected 125 g/t gold result. Both high-grade samples are from steep east dipping veins within the Nadele Breccia (an extrusive volcanic breccia) and near to the contact with the Navilawa Monzonite.

“The objective of Phase One of the 2018 surface exploration program is to confirm zones of high grade gold inside our Mining Lease but distinct from the main zone of mineralization at Tuvatu,” said Stephen Mann, “We expect to report further results from the 2018 sampling programs soon.” 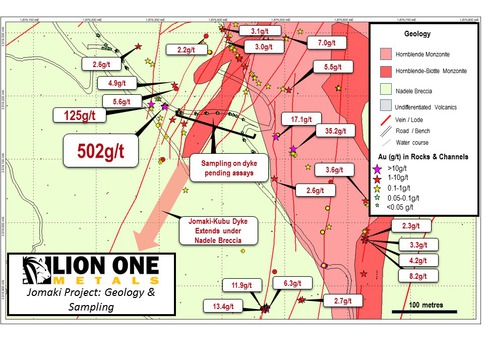 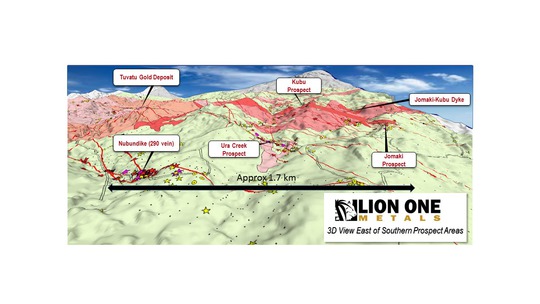 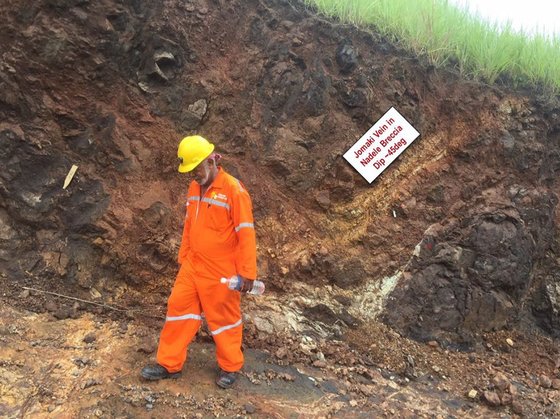 For detailed exploration reports including maps, assays, and results, please visit the Company’s website at the following address: https://liononemetals.com/tuvatu-project/maps-resources 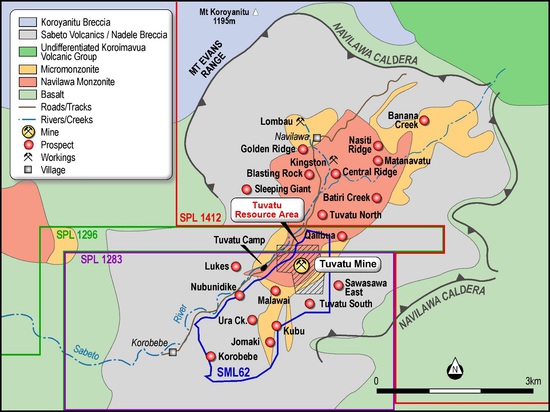 An excavator cuts a bench along the side of a slope to expose the geology. Structures are mapped geologically with areas of potential such as faults and veins recorded. Channel samples are from a hand-cut channel collected across mapped structures with the orientation of the channel being orthogonal (perpendicular) to the orientation of the structure and hence approximate the true-width. Channel Samples were logged, mapped, and placed in sealed bags and shipped to the facilities of ALS Global in Brisbane and Townsville, Australia, for sample preparation and multi-element ICP analysis. Rigorous quality assurance and quality control procedures, including the use of blanks, standards (inserted into the sample stream at a ratio of 1:20) and duplicates, identified no material issues. Samples were pulverized and analysed by a 50g gold fire assay with either an atomic absorption, or gravimetric finish / over-limit dilution method for samples initially reporting over 100 g/t gold.

Tuvatu is a fully permitted high grade underground gold project located in the South Pacific island Republic of Fiji, 17 km NE of the Nadi International Airport on Fiji’s main island of Viti Levu. Tuvatu is a low sulphidation epithermal gold deposit hosted in the eroded remnants of the Navilawa mineral system, one of Fiji’s largest mineralized volcanic intrusive complexes. The independent Tuvatu NI 43-101 PEA technical report dated June 1, 2015 envisages a low cost underground gold mining operation producing 352,931 ounces of gold over 7 years at head grades of 11.30 g/t Au, and cash costs of US$567 per ounce with all-in sustaining cost of US$779 per ounce. The Company has not based a production decision on a feasibility study of mineral reserves demonstrating economic and technical viability and as a result there is increased uncertainty and economic and technical risks associated. Tuvatu has been fully permitted by the Government of Fiji for operations start-up and has a dual-track strategy of exploration and development inside its mining lease and surrounding exploration license areas.

Lion One is aggressively advancing Tuvatu as a near-term production opportunity with exploration upside in the southwest Pacific Ring of Fire. Lion One has modelled Tuvatu for exploration after regional giants in the low sulphidation family of high grade epithermal gold deposits such as Porgera and Lihir in Papua New Guinea, and Vatukoula in Fiji, which boast production of over 35 million ounces of gold in similar alkaline volcanic settings.

Technical information relating to geology and exploration in this news release concerning the Company’s 2018 Surface Exploration Program has been reviewed and approved by Lion One Managing Director Stephen Mann, member of The Australasian Institute of Mining and Metallurgy, and a Qualified Person under NI 43-101.

Lion One Metals Limited is a mineral exploration and development company based in North Vancouver, BC, focused on advancing to production at its 100% owned and fully permitted high grade underground Tuvatu Gold Project located on the island of Viti Levu in the Republic of Fiji. Lion One’s CEO Walter Berukoff is leading an experienced team of mine builders, and has owned or operated over 20 mines in 7 countries.  As the founder and former CEO of Miramar Mines, Northern Orion, and La Mancha Resources, Walter is credited with building over $3 billion of value for shareholders.