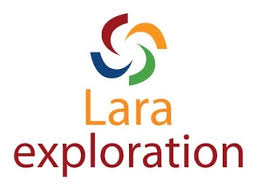 Miles Thompson, President and CEO of Lara commented: “We are very pleased with our first intercept from Planalto and excited to have potentially identified a new style of copper mineralization in the Carajás Province; we look forward to reporting results of the additional holes in the coming weeks.”

Drillhole 17-01 was drilled at an angle of 55 degrees at an azimuth of 030 degrees, 17-02 at an angle of 65 degrees to the same azimuth direction to test the northern end of a copper in soil geochemistry anomaly extending over one kilometre in strike length and up to 400m in width, interpreted as proximal to an important structural break between granitic intrusives and mafic-intermediate meta-volcanics and gabbro intrusives. Channel samples of rock and saprolite, where exposed across the main soil anomaly, included intervals with 12m averaging 5,180 parts per million (“ppm”) copper, 45m averaging 2,561 ppm, 33m averaging 2,062 ppm and 33m averaging 2,702 ppm Cu.

Copper mineralization logged in these first two drill holes was surprising in that it comprised predominantly chalcopyrite in a stockwork-like pattern of narrow sub-millimeter to centimeter-wide veins, veinlets and disseminations hosted in altered (biotite, actinolite and K-feldspar) mafic metavolcanics and gabbroic intrusive rocks. Chalcopyrite also occurs associated with magnetite in early K-feldspar-rich veins, as well as in later cross-cutting quartz, epidote, calcite and fluorite veins ranging in widths from a few millimeters to several meters. This style of mineralization differs from the more complex and pervasive alteration, associated with major brecciation and mineralization of the Iron-Oxide-Copper-Gold deposits typical of the Carajás Province. Molybdenite occurs sporadically in the low-grade copper zone of 17-02 with the best intersection of 591ppm Mo over 0.85m. Lara is in the process of drilling an additional two holes to better understand this mineralization, but provisionally it is interpreted as being related to a late Lower Proterozoic-age A-type granite porphyry.

All rock channel and drill core sampling were carried out by or under the supervision of the Company’s Vice-President Exploration and the chain of custody of the samples and drill core from the project area to the company’s sample preparation facility in Canaa dos Carajás was continuously monitored. Sample intervals for channel sampling varied between 2m and 4m and for drill core, the sampling interval varied from a little less than 1m to a maximum of 1.5m, being guided by the degree of copper mineralization and rock types.

Blank and certified reference materials were inserted approximately every 20th sample and the company routinely reanalyses laboratory pulps and crushed rejects for a number of samples from previous sample batches with each new sample batch. The samples were delivered to SGS-Geosol in Parauapebas where they were crushed and pulverized, with the sample pulps then dispatched by SGS-Geosol to their own analytical laboratory at Vespasiano, near Belo Horizonte, in Minas Gerais State, Brazil. The pulps are subjected to Agua Regia digestion with copper and 36 other elements being determined by ICP. Gold was determined by fire assay fusion and an atomic absorption (AAS) finish on a 50g charge. Copper values above 1% Cu are determined by fusion with sodium peroxide with an ICP OES finish. SGS-Geosol also routinely runs, and reports, a number of certified standards and blank samples with each sample batch. Check assays for copper and gold determinations have been carried out on a number of reject material samples from SGS-Geosol at a second commercial laboratory in Parauapebas.