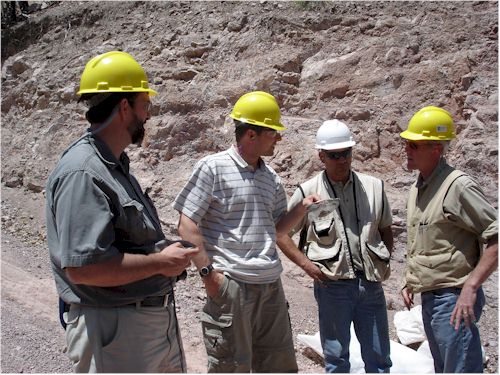 Kimber Resources Inc. (TSX:KBR)(NYSE MKT:KBX)(NYSE Amex:KBX)  provided an update on work currently underway on the Carmen gold-silver deposit at its Monterde Project, Mexico. Kimber Resources has commenced detailed mapping and sampling of the rehabilitated underground workings that cut through the Carmen deposit. This is the first time these underground workings have been subject to systematic channel sampling.

The underground work program initiated at the Carmen deposit is aimed at providing more than 1,000 metres of underground access to high-grade gold-silver mineralized structures, including the Carmen and Hilos structures (see figures 2 and 3 below). The underground work will include detailed mapping and sampling within the historic mine workings that were originally developed in the 1940’s. Historic mining at Carmen occurred between 1937 and 1944. Reported high-grade gold-silver mining produced 68,000 tonnes at 19.3 grams per tonne gold and 311 grams per tonne silver. Production was halted in 1944 due to lack of supplies during World War II.

“Kimber has, over the last four months, rehabilitated a significant portion of the 1940s mine workings within the Carmen deposit,” reported Gordon Cummings, President and CEO of Kimber. “Detailed sampling of the underground adits should give us valuable additional information about the nature, controls, grade and continuity of gold-silver mineralization along the Carmen and Hilos structures at various elevation levels.” he said. “We expect assay results to be released over the coming months. In addition, underground access in the core of the proposed open pit, outlined in the 2011 Preliminary Economic Assessment for the Monterde Project, will provide access to sample material for future metallurgical testing.”

Access along the Carmen structure includes the successful rehabilitation of levels 1 and 3 at elevations 2,250 and 2,320 metres, respectively. Level 1 provides more than 600 metres of strike length access along the Carmen structure while Level 3 provides approximately 270 metres of access along strike. Rehabilitation on Level 0 is currently underway and is expected to provide at least 150 metres of strike length access at an elevation of 2,220 metres. In addition to the accessible workings along the vein structures, cross cut drifts totaling 77 metres on the Carmen Level 1 and 57 metres on the Carmen Level 3 will be sampled to provide grade confirmation in the wall rock adjacent to the vein structures.

Sampling within the underground workings will include diamond saw channel sampling, taken in compliance with the Company’s core drilling QA/QC protocol, and will be analyzed for gold, silver and trace elements with ALS Chemex. The vein exposures in the workings will be sampled perpendicular to the strike of the structure, with the widths of the individual samples determined by the mineralization and alteration. The cross cut drifts will be sampled along the previous hand channel samples for comparison to earlier historic data, with sample widths again determined by mineralization, but typically on 1.5 metre intervals. Rehabilitation of accessible raises and stopes will also provide vertical coverage of the sample data from the ribs and backs of the workings. The data will be compared to the drill data in the area of the sampling for validation crosschecks and to analyze trends where stronger gold-silver mineralization occurs.

The analysis of trace element geochemistry is expected to provide additional supporting information on the trends of the high grade structures and is expected to aid in future exploration programs and technical studies.

Geological mapping of the workings will be completed to provide additional data on the nature of and controls on mineralization, structure and alteration along the levels.

To view Figures 1, 2 and 3 please click on the following link: http://media3.marketwire.com/docs/KBR0927.pdf