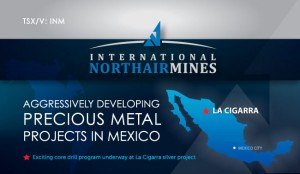 International Northair Mines Ltd. (TSX VENTURE:INM) is pleased to announce that it has closed non-brokered private placements for gross proceeds of C$1,859,315. Proceeds raised from the Private Placements represent an increase of approximately $350,000 over the total amount previously declared by the Company in its press release dated July 10, 2013.

Several strategic investors participated in the private placements, including Coeur Mining Inc. (NYSE:CDE) (TSX:CDM) which purchased 9,600,000 common shares at a price of $0.14 for gross proceeds of C$1,344,000. In connection with this subscription Coeur agreed to cancel all its outstanding warrants to acquire common shares of Northair, bringing the total amount of shares it owns to 20,350,000; representing 19.4% of the issued shares of the Company.

Concurrent with the Coeur Placement, Northair also completed a non-brokered private placement consisting of 3,553,896 Units at $0.145 for gross proceeds of C$515,315. Each Unit of the Additional Placement is comprised of one common share and one half warrant. Each full warrant will entitle the holder to acquire one common share of Northair at a price of $0.25 for a period of 24 months following the closing date.

Northair paid cash finders’ fees in respect of certain purchasers of securities introduced to the Company by the finder. The finders’ fees totaled $39,950 of the aggregate amount subscribed to by those purchasers.

Proceeds of the private placements will be used to advance the Company’s La Cigarra silver project, including the final purchase of key surface rights and for general working capital.

Northair is a mineral exploration company engaged in the acquisition and development of gold and silver properties in Mexico. The Company is currently focused on advancing its La Cigarra silver project located in the state of Chihuahua, which currently hosts a NI 43-101 resource estimate of 50.4 million ounces of silver in the measured & indicated categories grading 76 g/t silver and 3.5 million ounces of silver in the inferred category grading 61 g/t silver constrained by a Whittle pit shell at an economic cutoff grade of 30 g/t silver (assuming metallurgical recoveries of 84% silver). The La Cigarra silver deposit also contains appreciable amounts of lead, zinc and gold.