The mineralization in SA19-155 is hosted in what the Company is calling Porcelana-style mineralization, which is described as a very large, coherent, unfractured quartz vein that typically contains visible gold. This style of mineralization is part of the San Albino Zone and was first drilled in 2016 as part of a metallurgical/infill drilling program (see press release dated June 16, 2016).  Importantly, the 2016 and 2019 drill holes containing Porcelana are not included in the Company’s Preliminary Economic Assessment for the San Albino Gold Deposit dated April 29, 2015 and available on the Company’s website and under the profile of the Company on SEDAR at www.sedar.com.

In order to drill the strike and down dip extension of the area within the San Albino Zone containing Porcelana, the Company has decided to designate one drill rig to this area while a fifth drill rig has been requisitioned to complete the planned infill drilling elsewhere on the San Albino property as scheduled.

Akiba Leisman, Chief Executive Officer of Mako states “SA19-155 is one of the highest grade-thickness intercepts drilled at San Albino to date.  The fact that this mineralization starts approximately four meters from surface and is within our current open pit mine plan means that even small amounts of strike and dip extensions of Porcelana-style mineralization may have a material impact on the economics of the San Albino gold project.  Mako has dedicated a rig for the sole purpose of finding extensions of this area, and the Company is fully prepared to adjust its mine plan to bring these ounces into production earlier if drilling results support this decision.”

Although the focus of the current infill drilling program was the San Albino Zone within the West Pit, three infill holes were drilled into the Arras Zone totaling 140.4 m (see attached map). The Arras Zone projects near surface to the southeast of the West Pit in the Central Pit area. The best of the three holes drilled into the Arras Zone was AR19-115 which intersected 24.18 g/t Au and 28.5 g/t Ag over 6.45 m (5.9 m estimated true width) approximately 29 m from surface.

Mako began drilling the Arras Zone as new drill pads were being prepared for drilling at the San Albino Zone. The results from Arras Zone will be followed up on after the ongoing 6,000 m West Pit infill program is completed later this year.

These results will be incorporated into our production model and initial mine plan, where the company anticipates beginning commercial production by late summer of 2020. The Company does not intend to complete a Prefeasibility or Feasibility Study prior to commencing production.

The Company advises that it is not basing its production decision on a feasibility study of mineral reserves demonstrating economic and technical viability, and, as a result, there may be an increased uncertainty of achieving any particular level of recovery of minerals or the cost of such recovery, including increased risks associated with developing a commercially minable deposit.  Accordingly, there are multiple technical and economic risks of failure which are associated with this production decision. These risks, among others, include areas that are analyzed in more detail in a feasibility study, such as applying economic analysis to resources and reserves, more detailed metallurgy and a number of specialized studies in areas such as mining and recovery methods, market analysis, and environmental and community impacts. The Company’s PEA is available under the Company’s profile on SEDAR at www.sedar.com.

Drill core was continuously sampled from inception to termination of the drill hole.  Sample intervals were typically one meter.  Drill core diameter was HQ (6.35 centimeters).  Geologic and geotechnical data was captured into a digital database, core was photographed, then one-half split of the core was collected for analysis and one-half was retained in the core library.  Samples were kept in a secured logging and storage facility until such time that they were delivered to the Managua facilities of Bureau Veritas and pulps were sent to the Bureau Veritas laboratory in Vancouver for analysis.  Gold was analyzed by standard fire assay fusion, 30 gram aliquot, AAS finish.  Samples returning over 10.0 g/t gold are analyzed utilizing standard Fire Assay-Gravimetric method.  Due to the presence of coarse gold, the Company has used 500-gram metallic screened gold assays for analyzing samples that yielded a fire assay result greater than 1 g/t, and samples immediately above and below drilled veins.  This method, which analyzes a larger sample, can be more precise in high-grade vein systems containing coarse gold. All reported drill results in this press release used the standard Fire Assay-Gravimetric method unless otherwise indicated as using the metallic screening method.  The Company follows industry standards in its QA&QC procedures. Control samples consisting of duplicates, standards, and blanks were inserted into the sample stream at a ratio of 1 control sample per every 10 samples.  Analytical results of control samples confirmed reliability of the assay data.  No top cut has been applied to the reported assay results. 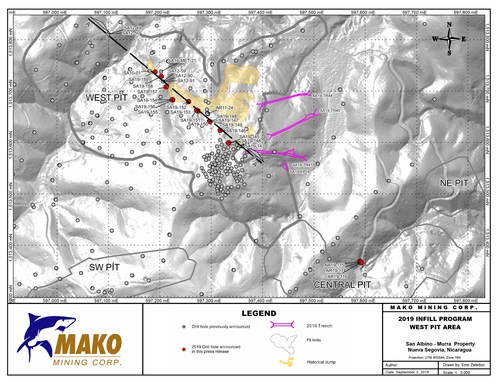 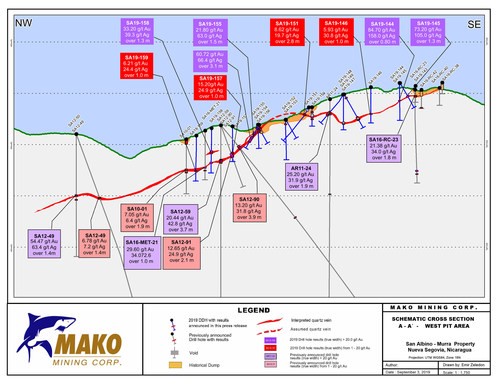