O3 Mining Inc. (TSX-V: OIII) (OTCQX: OIIIF) is pleased to provide an update on its well-funded 250,000 metre drilling program at its Marban and Alpha properties in Val-d’Or, Québec, Canada which seeks to convert, expand, and discover new gold resources. The Corporation is reporting 11 holes drilled in and around the Marban open-pittable deposits. O3 Mining is also pleased to announce the appointment of Jean-Félix Lepage to the position of Director of Operations.

O3 Mining’s President and Chief Executive Officer, Mr. Jose Vizquerra commented; “Our infill-drilling program continues to demonstrate structural continuity and resource expansion potential in and around the Marban open pits. I truly believe the pits have a huge potential for further expansion. Furthermore; as we look forward to moving the Marban project into production I am very excited to add Jean-Félix Lepage as Director of Operations. His knowledge and experience will be a key asset to O3 Mining as he will lead the team completing the Marban Pre-Feasibility Study “.

The Norlartic and North zones drilling highlights consist of a stockwork of quartz veinlets with disseminated pyrite within intermediate and mafic dykes as well as a basaltic unit within the hanging wall of the Norbenite Shear. The North North zones drilling consists of quartz and tourmaline veins in an altered granodiorite. This geology is consistent with the description of the mineralized zones of the historical mines in and around the Marban project. Many drill holes published today have crossed historical mining stopes and confirmed the presence of high-grade material within the mining walls and wide envelopes on both sides of those mining openings. 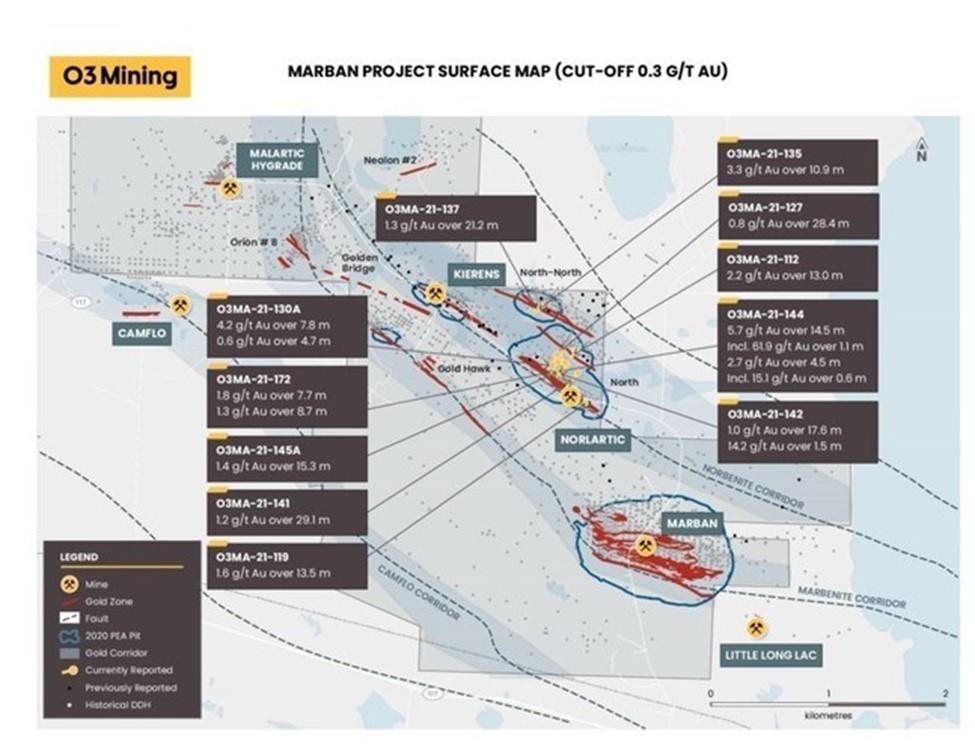 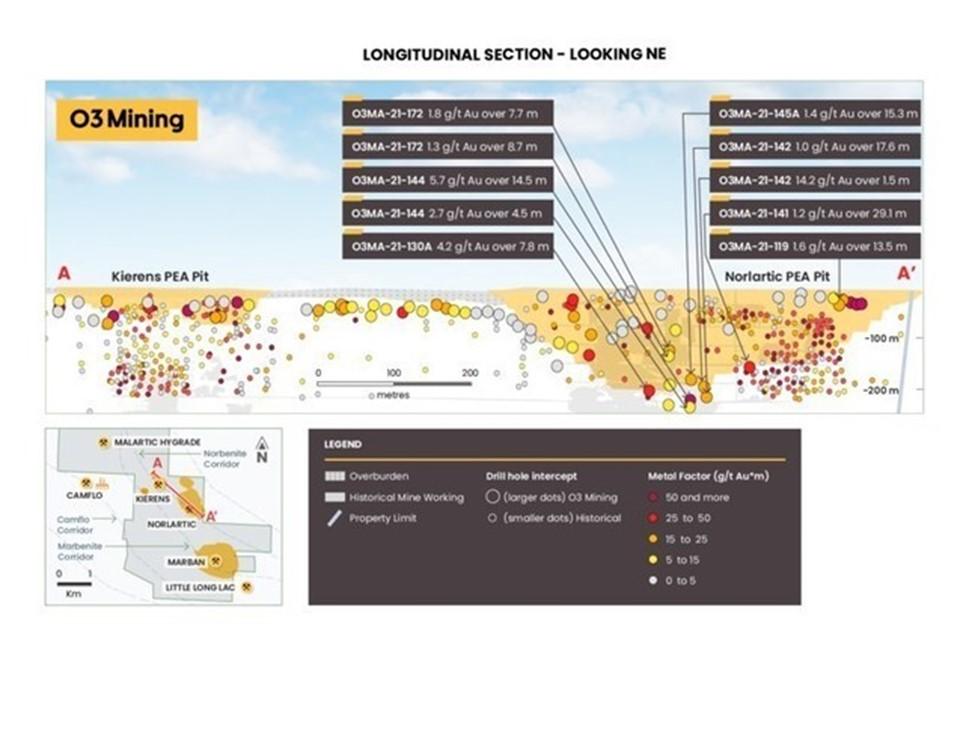 Jean-Félix obtained his Bachelor of Mining and Mineral Engineering from Université Laval and holds a college technical degree in mineral processing from CEGEP de Thetford. He has over ten years of experience in mining and optimizing processes, projects, and activities. Mr. Lepage most recently worked at Newmont Corporation where he held several different operational roles. Mr. Lepage began his career as a plant metallurgist and later moved on to be a mine superintendent where he managed the underground mining operations at Newmont. Recognized for his ability to manage multiple priorities in very dynamic situations, he will lead the team to complete the Marban Pre-feasibility Study as well as the development of the Marban project into production.

The Corporation has drilled 97,728 metres as of September 31st 2021 on its Val-d’Or properties testing for Potential Economic Material (“PEM”) with 100-metre step-outs aiming to expand current resources of 2.4 million ounces measured and indicated (62.0 Mt @ 1.22 g/t Au)1 and 1.5 million ounces inferred (20.2 Mt @ 2.27 g/t Au)1 and make new discoveries. All intercepts listed in today’s news release will be included in an updated resource for Marban which is expected to be released during the first quarter of 2022. 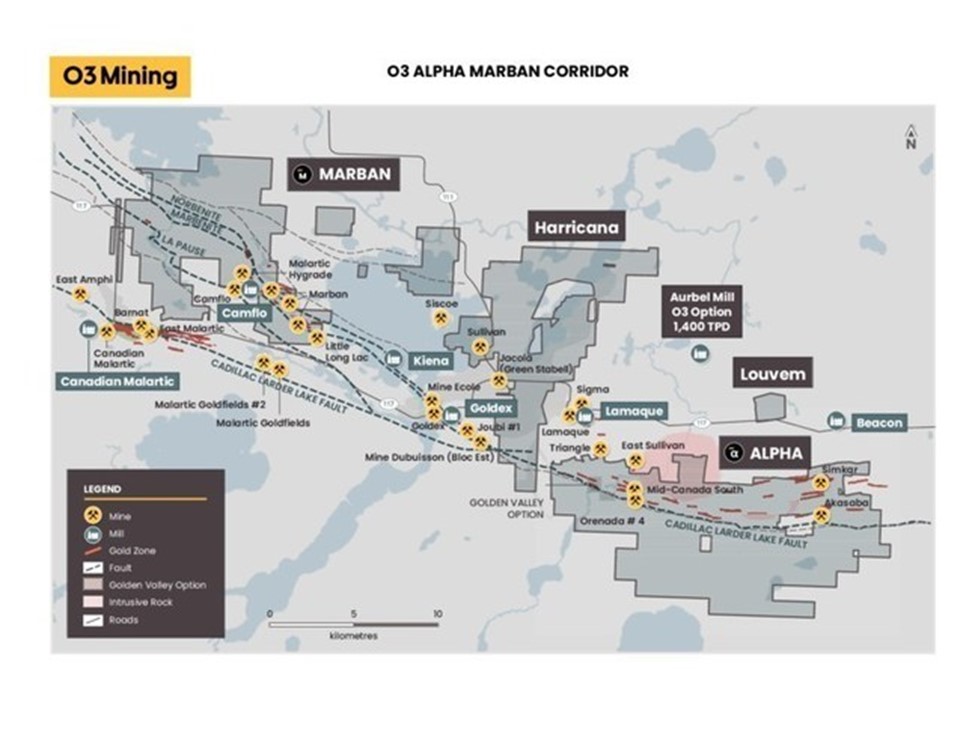 Drilling at Marban has focused on expanding mineralization in and outside of the proposed PEA pit areas, as well as discovering new mineralization for an underground mining scenario. An 80,000 metre drill program is being executed this year, with 54,382 metres drilled so far. There will be up to eight drill rigs testing for PEM, as well as, aiming to convert resources from Inferred to Measured and Indicated, to ultimately become part of Marban’s maiden mineral reserve.

The Alpha property is located eight kilometres east of Val-d’Or, Québec, and three kilometres south of the El Dorado Lamaque Mine. The property covers more than 7,754 hectares and includes 20 kilometres of the prolific Cadillac Break. O3 Mining has an option agreement that grants the right to acquire 100 per cent interest in the Aurbel Mill located only 10 kilometres from the Alpha property for C$5.0M within the next five years.

Drilling at Alpha is at an earlier stage than at Marban and has focused on grassroots exploration, deposit delineation, and resource expansion. A 56,000 metre program is being executed this year with  42,272 metres completed year to date. O3 Mining will have up to three drill rigs testing for new discoveries using its PEM drilling strategy as well as focusing on deposit delineation and expansion of the current resource.

The scientific and technical content of this news release has been reviewed, prepared, and approved by Mr. Louis Gariepy. (OIQ #107538), VP Exploration, who is a “qualified person” as defined by National Instrument 43-101 – Standards of Disclosure for Mineral Projects (“NI 43-101”).