IMPACT Silver Corp. (TSX-V:IPT) is pleased to announce high-grade silver results from surface drilling which have extended mineralization 250m south at the San Ramon Mine in the Royal Mines of Zacualpan District, central Mexico. The zone remains open for further extension.  Results from these new drill holes are as follows: 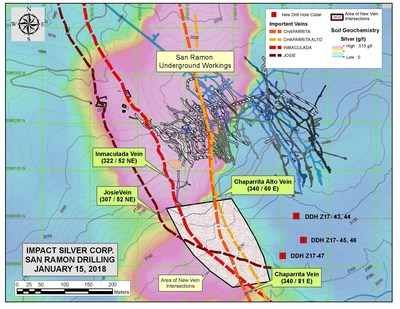 Three veins of interest were intersected (Inmaculada, Chaparrita and Chaparrita Alto) on the up-dip portion of the San Ramon Deeps Zone. Previous mining at San Ramon focused on the Inmaculada and to a lesser degree the Chaparrita. Mine. Levels 2 and 7 have been proposed to extend mining access to this newly defined mineralization.

Fred Davidson, CEO, stated, “With these drill results we continue to successfully extend the San Ramon mineralizing system which is larger at depth than near surface. These results along with some historic holes, extends the mineralization 250 meters south of existing mine workings and 200m vertically up-dip representing potential additional mining areas for the San Ramon Mine. We have two underground drill stations almost ready from which we will test the further extension of the zone to depth and to the south.”

Wojtek Jakubowski, P.Geo., a Qualified Person under the meaning of Canadian National Instrument 43‑101, approved the technical content of this news release.

IMPACT Silver Corp. is a successful silver-gold explorer-producer with two processing plants on adjacent districts within its 100% owned mineral concessions covering 357km2 in central Mexico.  Over the past ten years over 7.7 Moz of Silver has been produced, generating revenues of $160 million, with no long-term debt. In the historic Royal Mines of Zacualpan Silver District three underground silver mines feed the central 535TPD Guadalupe processing plant. To the south, in the Mamatla District the Capire processing plant is currently rated at 200TPD, but is expandable.  It is adjacent to an open pit silver mine with a NI-43-101 compliant resource that is awaiting higher silver prices to be restarted.