Branden Haynes, CEO of Hawkmoon, stated, “Stock consolidation is never an easy choice to make for any company but unfortunately it was necessary to facilitate Hawkmoon’s ability to finance in 2023. Last year was challenging for Hawkmoon and for many of its peers in the junior exploration space. This financing will give Hawkmoon the ability to develop its new lithium project and further drill the Wilson Gold Project as well as conduct exploration on the recently acquired Barriere and Gilnockie claims in BC.”

The Units to be issued under the financing will be subject to a four month hold period. The Company may pay commissions or finder fees on the amount raised through the Offering. The terms of the financing are subject to applicable securities laws and regulatory requirements.

The Company is pleased to announce that it has entered into an option agreement  with Thomas W. Clarke and Drakensburg Corporation dated January 3, 2023, pursuant to which the Company was granted an option to acquire a 100% interest in the Bonanza lithium brines property. The Bonanza Property is comprised of two metallic and industrial mineral permits covering approximately 18,432 hectares located approximately 140 kilometres northwest of Grande Prairie, Alberta and 25 kilometres east of Dawson Creek, British Columbia, as shown in figure 1. The Bonanza Property is easily accessed by Alberta Provincial Highway No. 49, secondary highways, and the Alberta township and range road network.

According to Eccles and Jean (2010) (see References below), there is a lithium in brines target on the Bonanza Property. An abandoned oil well drilled in 1975 with the unique well identifier number 00/07-30-080-11W6/0 intersected the Wabamun Group Carbonates from 3,252.80 to 3,304.00 metres down hole (51.20 metre thick target). This old well with a significant lithium in brines grade is shown in figure 2. Of the entire data set for Alberta lithium brines, only 4 percent of wells with data had lithium values of at least 70 mg/L.

The Wabamun Group consists of both dolomitic siltstones and calcareous dolomites. The upper part ot the Wabamun is dominated by limetsones while dolomites are the principal lithology in the middle and lower strata. The thickness of the Wabamun Group ranges from zero metres to 240 metres in west central Alberta. 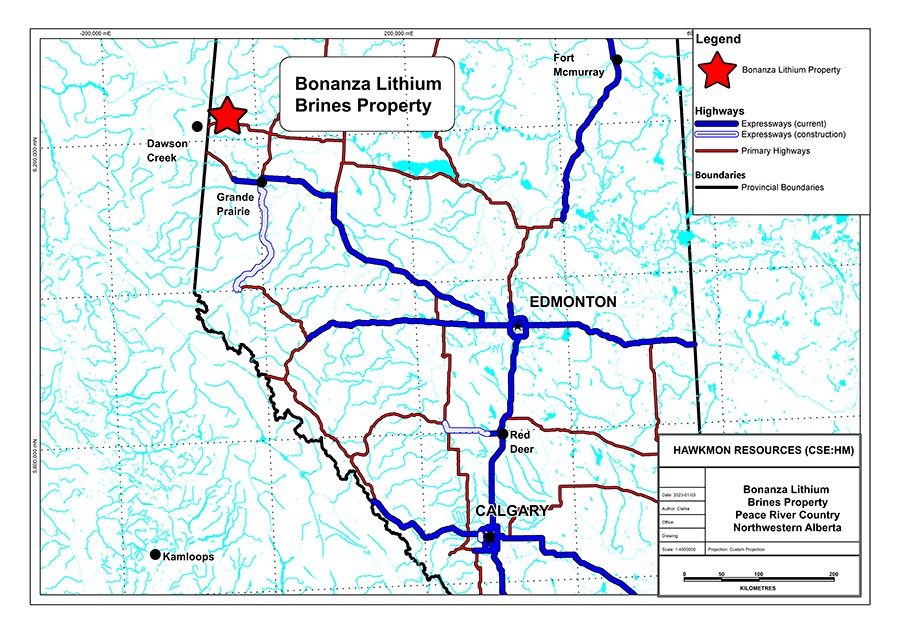 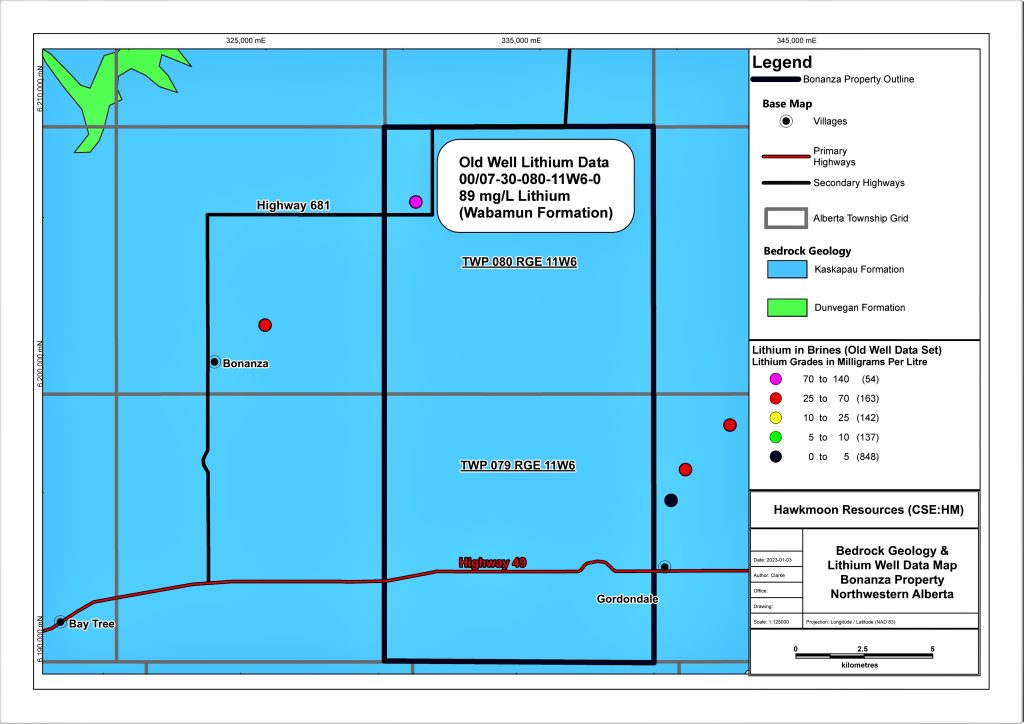 The surface bedrock geology of the Properties is comprised almost entirely of the Kaskapau Formation. The Spirit River Formation is also present on the Gordondale Property. A surficial bedrock geology map is shown in figure 4.

Table 1 outlines the exercise terms of the Option Agreement.

Branden Haynes, CEO of Hawkmoon, states “The Canadian province of Alberta has significant lithium resources and is poised to compete in the global market. The province’s oil fields hold large deposits of lithium in subsurface brine, which has long been overlooked as industrial waste from oil field operations. New technologies known as “direct lithium extraction” are being developed to access Alberta’s lithium-brine potential in many of the same reservoirs as Alberta’s existing oil and gas resources. Hawkmoon believes that lithium presents exciting opportunities for investment and diversification.”

Hawkmoon is focused on junior stage project acquisitions across Canada. One of these projects is located in one of the world’s largest gold endowed areas, the Abitibi Greenstone Belt. The Wilson Gold Project can be accessed by government-maintained roads located east of the town of Lebel-sur-Quévillon. The company has recently acquired the Barriere and Gilnockie projects in British Columbia.

The technical information in this news release has been reviewed and approved by Thomas Clarke P.Geo., Pr.Sci.Nat. Mr. Clarke is a “Qualified Person” under NI 43-101 and is a director and the Vice President Exploration of Hawkmoon.