It’s been a few months since I talked uranium. I watch the price and momentum every day, to be sure, but I haven’t commented of late.

I was reminded of that lacking when a question came to my inbox on whether SPUT’s failure to get a US listing is the main reason the uranium price has slid. To that first: yes, the Sprott Physical Uranium Trust failed to get a NYSE listing. This was not a huge surprise, as the structure of the fund put it on the edge of NYSE requirements.

A New York listing would certainly have been nice, as it would have made it even easier for US investors to buy this physical uranium fund. But it’s already easy to buy in the US as SRUUF on the OTC, and of course is available to anyone who can buy Canadian stocks.

In short, I think that a NYSE listing might have added some momentum to the story but the failure to get one has not damaged the story. Instead, the overall markets are mostly to blame, because uranium’s fundamentals have only improved in the last two months.

The spot price of uranium has come off with everything else, falling from a high of US$64 per lb. in April to touch $45.50 before gaining again slightly to close at $46.70 per lb. today. 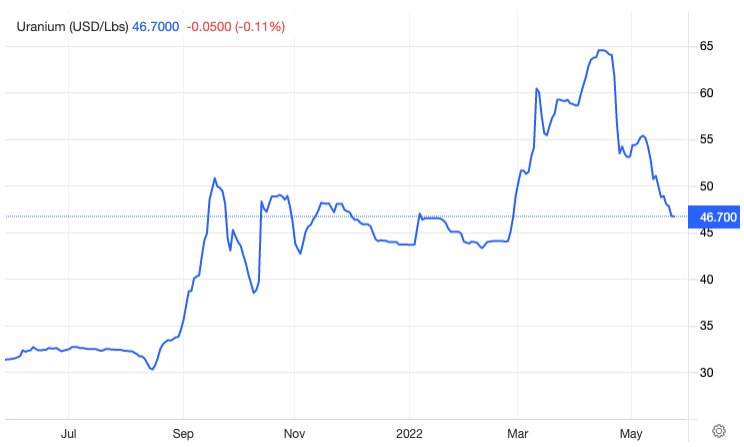 The fundamentals have not changed. More accurately, I should say this slide is not because the fundamentals have weakened – they have in fact gotten stronger, for two reasons. The first is Russia and enrichment. The second is the world’s move to re-embrace nuclear power.

I explained the Russia enrichment situation once prior but it’s a complicated concept, so pardon me running through it again. Uranium mines produce U3O8. That gets converted into UF6, a gas. That gas is then enriched, which is to say it is spun in a centrifuge to increase the ratio of the highly fissile U-235 isotope relative to the less fissile U-238 isotope (isotopes are molecules of the same element with different numbers of neutrons in their nuclei). It is the resulting enriched uranium that can be turned into fuel for nuclear reactors.

Russia is home to 40% of the world’s enriching capacity. That capacity is now hard to access.

When there is ample enriching capacity, enrichers underfeed. They essentially put less uranium into the machine and process it longer and harder, squeezing every possible bit of enriched fuel out of each pound of uranium feed.

When enriching capacity is tight, the situation flips. Enrichers start overfeeding: they push uranium through their machines are quickly as possible, focused on churning out product rather than on getting as much product as possible from each pound.

And needing more is where enrichers now stand: in a complete 180, enrichers are suddenly swinging from underfeeding to overfeeding to try to produce enough enriched uranium to meet demand. The swing means enrichers will go this year from selling 10 to 15 million lbs in the spot market to buying 5 to 10 million lbs.

So suddenly losing 40% of the world’s enriching capacity is turning enrichers from a source of supply into another source of demand.

The other big thing that keeps adding strength to the uranium picture is the re-embracing of nuclear. South Korea has made a complete about face, with the government reversing plans to phase nuclear out and committing to support nuclear power plant technology. The Philippines is considering a return to nuclear after years very opposed.

Then there’s California, once the most vocal opponent to nuclear. California just asked the Biden administration for federal funds to keep its Diablo nuclear power plant open beyond what had been its scheduled closure date of 2025. As the experts (really – they are the best) at Uranium Insider noted in a tweet, as a longtime environmental first mover, California keeping Diablo online gives the whole world permission to re-think planned nuclear plant closures. 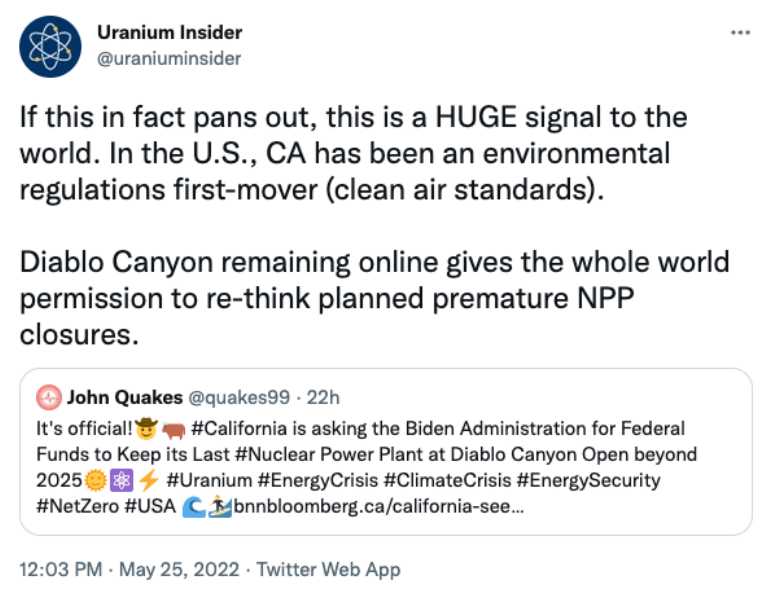 Then there’s Japan. Japan’s process for restarting shuttered nuclear plants post the Fukushima disaster has been so slow that few are really paying attention anymore…but this molasses-slow process just got a jolt of speed.

Japan shuttered 60-odd reactors in the wake of their nuclear disaster. A decade later, 11 have been restarted. Like I said, it’s been SLOW. But in the last month the government has announced plans to restart another 20 reactors immediately. This is big news – it creates new and unexpected demand now.

If things were so good and have recently gotten better – why the slide?

For the simple reason that the entire investing world went risk-off and, even though the fundamentals for uranium are so strong you could argue it’s not a risky bet, that includes uranium.

For uranium, sliding sentiment has ended up a double whammy because it has forced the biggest buyer in the uranium market to sit on its hands for almost two months. The Sprott Physical Uranium Trust (SPUT) can only raise capital and buy uranium when its share trade at a premium to its Net Asset Value (NAV). That requires investor inflows. When those inflows dried up in April, SPUT fell into discount territory and hasn’t been able to buy since (until yesterday, I believe, though that does not show on the chart below).

The Russia enriching situation has also had a bit of a backwards short-term effect. When Russia’s enrichers suddenly became harder to access and undesirable in the long term, utilities put all their focus on finding enriching capacity and/or UF6 outside of Russia. That makes sense…but ironically it meant they stopped thinking about U3O8 for a while.

It’s like they could only handle one challenge at a time, so they just dropped the big challenge – securing enough uranium to cover needs over the next decade when the world won’t produce enough to satisfy demand – to deal with the immediate challenge. Their focus will shift back again.

At last week’s conferences, several subscribers asked me what I thought we should do about our uranium positions. To be sure, the ones we entered last fall are underway by about 25%, which doesn’t feel great.

My answer each time was that I am more bullish on uranium in the near and medium term than on any other mined commodity. (Fertilizers are up there too, I have to say, but let’s stay focused.) There are two reasons.

Together, fundamental undersupply and price-insensitive buyers make me think that uranium has the potential to decouple from the broad markets. I am not promising that it will, but I am saying that it might. If broad markets grind lower over the next year, with some bear market rallies in the mix, I think uranium could decouple and rise. Such decoupling is not common but it has happened, such as how gold decoupled from the broad markets between 2000 and 2003 (when the Nasdaq lost 80% but Newmont more than doubled).

Utilities are slow-moving entities. They are focused on the enriching issue right now, which means they aren’t contracting U3O8. Over the next few months they will get back to that. In the meantime, even fairly small investor inflows into SPUT can put it back into premium territory, given that the lower uranium spot price has pushed its NAV down. SPUT buying over the last day or two has clearly supported the price and I expect the fund will do that whenever it can.

No market is easy to predict over the near term. But few markets have stronger arguments in their favor than uranium.