Gwen Preston – “The (Uranium) Mailbox Question That Got Away”

Gwen Preston – “The (Uranium) Mailbox Question That Got Away”

Below is a reader question and the answer I provided, which ended up a lengthy discussion of the latest in the uranium market. Then the news hit that Japan is expediting its return to nuclear power, more than a decade after the Fukushima disaster. I added that info following the original response…which turned this into a major article. Hence calling it The Mailbox Question That Got Away!

Most of my money is now in uranium stocks and I am finding it very frustrating that the uranium price hasn’t moved. Apart from a little Hong Kong stock CGN resources, I am down on most. The strange thing is, every other commodity bar gold and silver seem to be going up. I went along to my local builders merchant yesterday to buy two planks of timber to put up two small shelves and it cost me £70 for the timber. I was told it was so expensive because timber costs have trebled in the last 6 months or so along with most other building materials. Yet Uranium, which one would have thought would have risen, has stayed very boringly around the $47/48 per lb. mark. Do you have any thoughts on this?

Oh I feel you. We are in the last throes of permitting to build a garage and in the almost-year it has taken to get this darn permit, concrete and wood have gotten far more expensive.

Why hasn’t uranium moved? When will it move? These are good questions.

The biggest driver for the spot price over the last year has been Sprott Physical Uranium Trust. When SPUT is buying in the spot market, the spot price rises. SPUT can raise new funds (that it uses to buy physical) when its share price is at a premium to its net asset value. That happens when investors are buying SPUT in anticipation of a rising uranium market. For investors to believe the spot price will rise (which would increase SPUT’s NAV), I would argue they have to in general see growth ahead.

Now, I say the same thing for all base metals. And it makes all kinds of sense when discussing copper or silver or nickel etc. I realize it makes less sense with uranium; uranium is such a small and closed market that it should make its own moves based on utilities’ needs for uranium now and in the future. But utilities are less opportunistic that you’d think. If I were a nuclear utility, I would buy now, ahead of the supply crunch that’s coming. But that’s just not what’s happening. In fact, the spot market has been pretty darn quiet of late. Summer doldrums (traders on vacation) is part of it.

The other part of it is that the uranium market is distracted, by two things. One thing is enrichment. I’ve talked about this in the letter: to become nuclear fuel, yellowcake must be converted to UF6 (a gas) and then enriched (by being spun in a centrifuge) to increase the ratio of the more fissile U-235 isotope to the more common U-238 isotope. 40% of the world’s enrichment capacity is in Russia. With those facilities unavailable, or at least significantly unattractive, utilities have been scrambling to lock down enrichment contracts with non-Russia facilities. This has taken precedence over buying uranium for future needs.

The other distraction is the splitting of the uranium market. With the US government (finally) acting on its statements about supporting US uranium production (or better said ‘friendly’ uranium production, as Canada and Australia are included) with some concrete plans to establish a reserve (they even have purchase contract offers out for bidding right now), it’s increasingly clear that the uranium market will end up bifurcated in some way. Will there be a different (higher) price for “US uranium” in the near future? Will there be requirements of some sort for US utilities to buy uranium from certain origin countries? These questions are giving producers and buyers of uranium pause for the moment, as clarity is needed (for best profiting and perhaps for compliance).

Going back to my starting comment on investors needing to see growth: SPUT has become a very important force in the spot market in the last year. That matters in this conversation because SPUT’s price is set by the overall market, not by whether a small group of nuclear utilities is interested in buying.

This is where the ‘growth’ sentiment part comes into play. Like I noted, SPUT can only raise new money and therefore buy uranium in the spot market when there is enough investor interest to push its price to a premium against value of its uranium holdings. In other words, investors must be bullish on SPUT (bullish on uranium) for SPUT to trade up, which then enables it to buy uranium, which brings the spot market along (because of the scale of SPUT’s purchases). 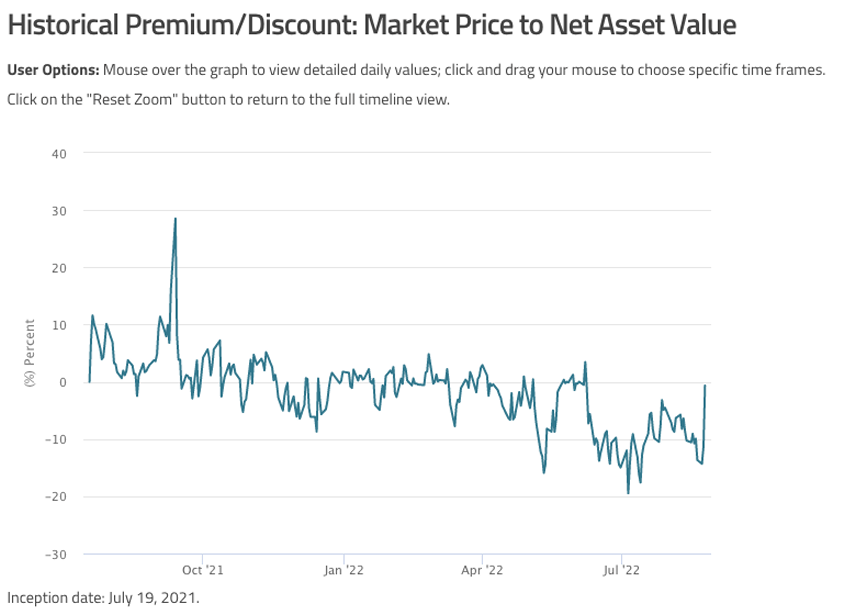 This chart of SPUT’s premium/discount to Net Asset Value makes clear that SPUT has not been able to do much buying in 2022. This is a big reason we uranium has lacked momentum. And I think it’s driven not so much by medium (let alone long) term views on uranium. I think it’s driven by day-to-day sentiment. And right now sentiment is mixed: investors want to take advantage of this overall summer bull market (and want it to continue!) but are also wary of what the fall will bring. It means buys are opportunistic, rather than being based on a solid vision of economic growth ahead.

Even though the uranium argument will, I think, withstand whatever happens to global growth over the next year (China is not going to halt its nuclear reactor plans!), near-term sentiment still drives what people are doing with their money right now. What they are doing is not buying metals or energy growth. And so they are not buying SPUT, medium term fundamentals notwithstanding, which means SPUT is not able to buy physical, which would lift the spot price and rejuvenate the market.

What will change this? Investors want to get back to betting on growth. That’s a huge part of what fuelled the summer rally. So I think as soon as there is any certainty on that – Europe stops sliding towards recession, China concerns ease some, and/or US inflation comes under control and focus shifts back to growth – then I think focus will shift to the ways to profit from growth. Uranium should play a central role there.

It’s a slog, waiting through this recession? tightening? inflation? period. And it will be some time yet. I spend too much time wishing that commodity markets were more forward looking than they are…but they just aren’t! Instead they are beholden to investor sentiment just like everything else.

Japan’s prime minister, Fumio Kishia, announced plans to restart seven more idled nuclear reactors, as soon as possible, and to look at developing new, next-generation reactors, with officials tasked to come up with plans by the end of the year.

This represents a clear policy shift, though one that is not surprising given soaring energy costs, global fuel shortages, and increased extreme weather. Tokyo has already seen two power crunches this year, one of which happened during a heat wave (residents were required to set thermostats to 80F to reduce air conditioning). By restarting its reactors, Japan hopes to stabilize its power supplies and curb its reliance on energy imports.

Japan has been restarting nuclear reactors since 2015 but the process has been very slow; only 10 of the operable fleet of 33 have been turned on. Now PM Kishia is directing a rapid acceleration. He also told officials to explore extending the lifespans of existing reactors beyond the current 60-year maximum.

For the uranium market:

That this is bullish for uranium was on display, with uranium stocks running 8 to 15% on the news.