It’s been a relatively quiet week in the markets. Though I should emphasize ‘relatively’ in that sentence – things have been so chaotic of late that ‘quiet’ just means nothing moved in historic ways.

The things that did move stayed aligned with my outlook. Of note, we had some further indications of strength from the US economy paired with indications of capitulation from US fund managers. If those sound like strange bedfellows – welcome to today’s strange economic setup.

On the economic strength side, job postings in the US remain strong, at least according to data from the job site Indeed. Postings have declined slightly over the last six months but only slightly. 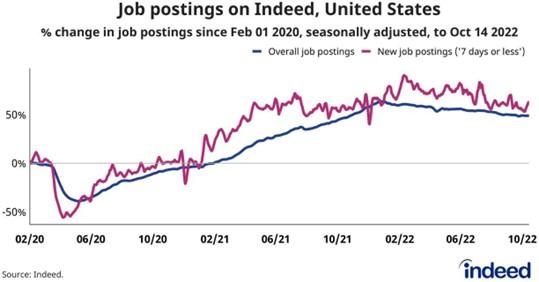 Industrial production data out yesterday easily beat expectations with a 0.4% gain versus 0.1% expected. It kept the trend of relatively stable positive growth intact. And the increase in production was broad based. 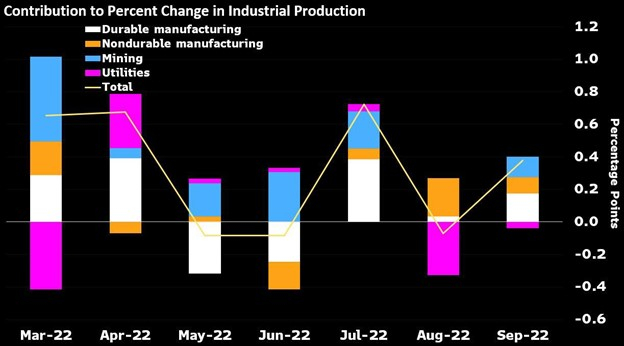 While we like economic strength, it doesn’t help the inflation problem. Anyone still hoping for a Fed pivot is actually hoping for either some kind of systemic financial crisis or a recession that hits households hard enough that month-over-month inflation comes down to zero.

Because it would take zero percent inflation, month over month, in November and December just to get annual inflation down to 7.22%. 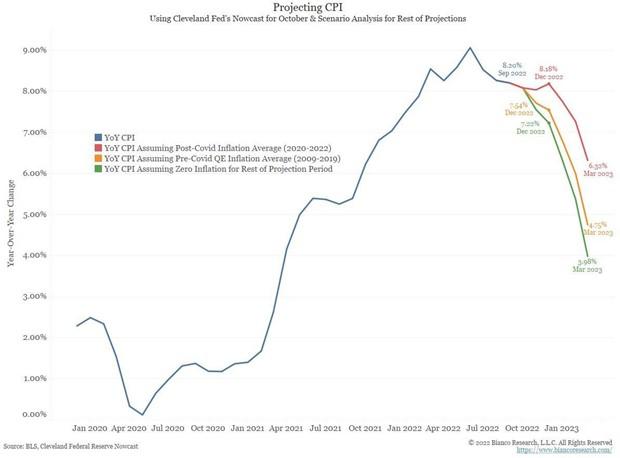 I note this as a reminder of the magnitude of the inflation challenge facing the Fed. Yes, it’s easy to say The central bank shouldn’t move so aggressively because it’s going to tighten us into a recession!!! but there is no painless was to fight inflation down once it gets this high.

And every data point showing US economic strength is another reason for the Fed to fight the fight. Strength means the economy has the capacity to handle it and the job isn’t done yet.

Of course, investors act based on what is happening, not why it’s happening. It matters not that tightening is a necessity. What matters is what tightening is doing to investing outlooks now and in the next while. The answer: pushing stocks down and bond yields up.

On stocks, the Bank of America publishes a monthly survey of global fund managers. The latest issue, which just came out, shows that the folks running the biggest pools of money in the world have given up.

The weird thing, though, is that money is still flowing into equities. I don’t quite understand how, given that fund managers are more bearish on stocks than any time since the survey started, including in 2008 (!). individual investors must still be buying the dip. 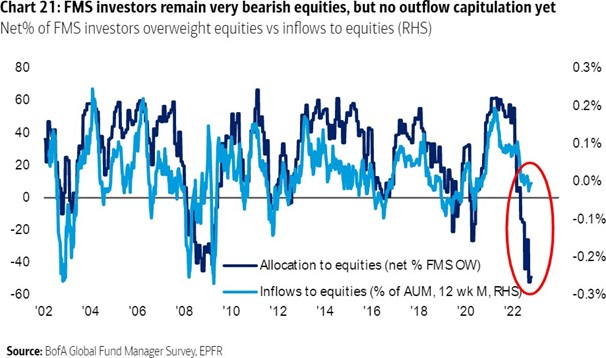 The next chart suggests Buy The Dip activity isn’t likely to last long because liquidity is drying up. 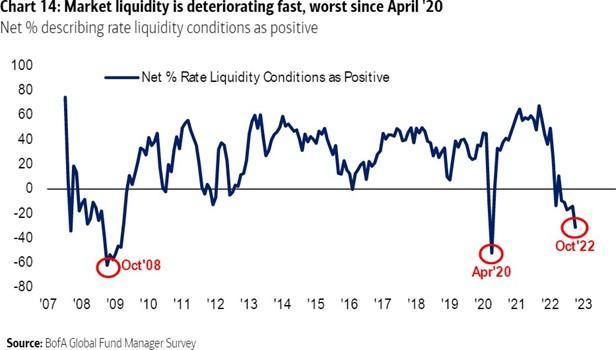 The survey also showed that a majority of fund managers expect interest rates to be higher 12 months from now, but the number expecting a pivot to lower rates has actually risen recently. There’s only one reason to think rates will turn lower: the idea that the Fed is going to cause a crisis. I talked about this last week: how a global credit or leverage crisis becomes very possible when financial conditions that have been stable for a long time change quickly.

Fund managers also expect Q3 earnings to disappoint and believe uniformly that risks of all kinds have risen dramatically over the year. 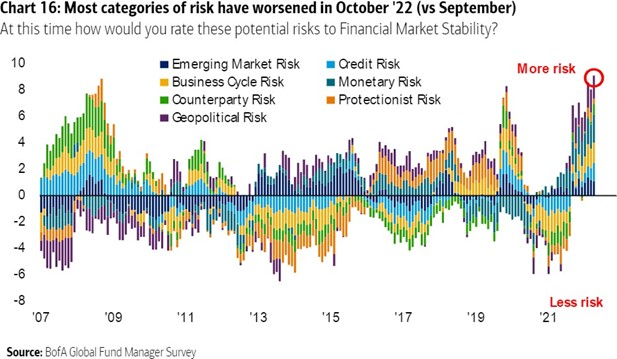 So the economy is, for now, doing ok to fine but big investors have thrown in the towel after deciding that risks are rising, liquidity is evaporating, earnings can’t but disappoint, and the outlook is grim.

If conditions were any better, I think investors would be paying attention to copper, zinc, and uranium. The physical copper and zinc markets are like coiled springs right now – there is lots of each metal in concentrate but refined metal markets are very tight because power shortages across Europe, on the heels of power shortages across China through the summer, have smelters operating well below capacity if they’re operating at all.

There is, in fact, only three days worth of each metal available in tracked inventories. That is incredibly low. It leaves the markets vulnerable to supply shocks, which could very likely happen if more European smelter capacity goes offline during the winter because of energy prices.

It should also set the stage for strong rallies in these metals once markets bottom. As soon as dour investment outlooks start to brighten, investor should seek out sectors with clear leverage to economic growth. Metals necessary for growth for which supplies are incredibly tight fit that bill. Infrastructure spending packages, which are likely, would only amplify the opportunity.

The setup with uranium is different but similar. There are no new pressures creating immediate supply shortages…but there are new demand pressures adding to market that was already short on supply. The ‘new’ demand is from Germany not shutting down its reactors and France announcing $50 billion to fund six new nuclear reactors. Nuclear is the only real answer in Europe’s effort to turn away from Russian natural gas.

When outlooks are grim, nothing works. Uranium is a lynchpin to Europe’s energy crisis, copper is essential in growth of all kinds and especially in the green transition, the iron and steel in new infrastructure would corrode without zinc, there isn’t enough of any of these metals to meet basic global demand in a few years, and for copper and zinc there wouldn’t be enough refined metal to ensure daily demand can be satisfied should supplies get just a bit more squeezed…but none of this things matter right now.

That sounds annoyed. I don’t intend that. I started this note saying that markets move based on what is happening right now. Right now, the need to tighten rates until either the economy slows down or something breaks to get inflation under control has fund managers about as pessimistic as they’ve ever been. Retail investors aren’t quite as dour but the fact that liquidity is evaporating means they’re not likely far behind.

At times like these, it essentially doesn’t matter how strong the medium-term investment case is for anything because no one is buying.

Of course, extremes create opportunity. Investors who wait and watch for the right moment will do very well once this is over. Unfortunately, that will only happen soon if a crisis crops up. Barring a systemic financial crisis, it will take a while for the strong US economic ship to change directions. Sigh.