Gwen Preston – “Half A Point Later, Still No Clarity”

Gwen Preston – “Half A Point Later, Still No Clarity”

They did it: the Fed raised interest rates by 50 basis points. If anything, Jerome Powell was a bit dovish in his press conference. He told everyone to expect several more 0.5% raises over the next few meetings, but that larger hikes are not currently part of the plan. That went against market expectations, which had priced in one 75-basis point raise in the coming months.

You’ve all likely seen what happened next: markets soared on Wednesday, notching the biggest gains in decades following a Fed decision (the S&P rose 3%), and then gave all that and more back on Thursday, when the S&P 500 lost 3.6% and the Nasdaq dropped 5.1%.

Currency responses were not the same in different countries. In case you somehow missed it, the US dollar continues its march higher. The pound, meanwhile, skidded 2% followed the BOE’s rate hike.

Outlooks remain extremely muddled. Powell’s goal is to boost borrowing costs (rates) in a sustained way to tame inflation without delivering a recession. And he noted some improvements on the inflation front: supply chain stress appears to be easing, hiring might be slowing down (Facebook dialed back its aggressive headcount growth plan yesterday; a month ago Amazon did the same), and much-soured sentiment in tech land is translating to less startup funding, more care with cash, and slower hiring. Pair steady-an-she-goes hikes with easing inflation and a soft landing might be possible.

Unless you ask the bear side of the market, which sees recession around the corner. The bond market clearly doesn’t think Powell was hawkish enough; that yields spiked following the rate hike suggests bond traders think recession is the only way to fix inflation.

There are all manner of bear arguments. One that I’ll pass along here came from Canaccord analyst Martin Roberge, who noted that the world economy looks “eerily like the environment that preceded the 1998 financial crisis.” Roberge pointed to the same forces pushing the US dollar vertical now as then – huge differences between US and world monetary policy and growth expectation – and said if the dollar, now above 103, takes out resistance at 104, the next resistance is way up at 120…which is what the dollar reached through the 2001-2002 recession.

The problem, as Roberge sees it, is that central banks are on an unavoidable collision course. The Euro and Yen are plunging while the dollar rises, because growth is stagnant and rates will remain near zero in Europe and Japan while growth is strong and rates are rising in the US. But none of those things can change and the resulting strength in the USD could trigger a currency crisis. One super strong currency isn’t good in a globalized world. One example: in 1998 a very strong US dollar was the driving reason Thailand unpegged its baht from the dollar, but the move triggered a wave of sudden, large currency devaluations and massive flights of capital from Asia.

Then there’s Russia and zero-COVID in China, two external shocks that are still hitting and could send PMIs into bust territory this summer. PMIs capture the direction of market conditions by surveying supply chain managers across 19 industries. A reading above 50 indicates economic expansion; below 50 means contraction.

He sees sub-50 PMIs coming in part because the US OECD LEI (an index of indicators like order books, confidence, building permits, long-term rates, new car registrations, and more that is designed to provide early signals of turning points in business cycles) has dropped below 0 (the blue line in the first panel below) while the US OECD LEI diffusion index (different way of representing the same data, to better represent the range of answers) is bombed out at 15% (the blue line in the second panel). 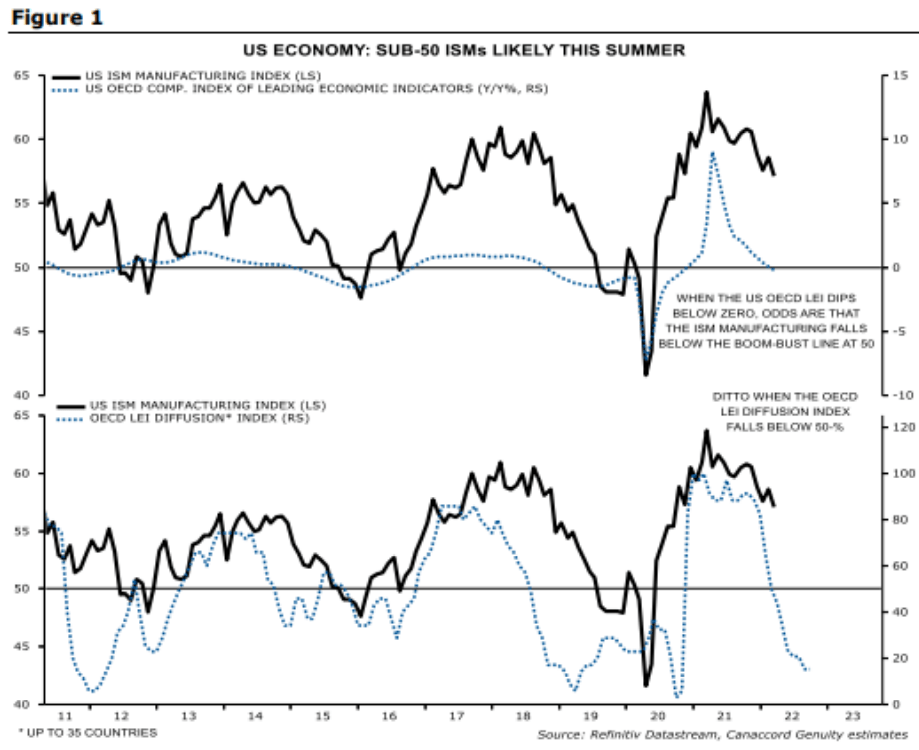 The black lines show ISM manufacturing index, declines in which indicates slowing growth and values below 50 indicate contraction territory. The combination of OECD LEI below 50 and OECD Diffusion Index bombed out below 20% reliably predated manufacturing falling below 50 in 2012, 2015, and 2019. Roberge’s conclusion: “sub-50 PMIs are not a question of if, but when.”

That was a lot of data to make a point, which is that the bears out there see ample reason to expect a recession (the latest argument I heard was that the government wants to engineer a recession so they can swoop in with the digital currency they have been quietly establishing…). Meanwhile the bulls have lots of arguments why a soft landing is possible.

Not surprisingly, I end up just where I landed earlier this week: I don’t know what will happen! Turns out the very-expected Fed rate hike didn’t change that 😉

I heard a lot of similar sentiments in Vegas this week. I’m happy I raised some cash, cause now those decisions are done and the cash is available should things slide and great prices present. If not, I still own a lot of stocks!