The Metals Investor Forum (September 6-7) and the Precious Metals Summit in Beaver Creek, Colorado, were both well-attended and very useful conferences. And the crowds at both were more positive on gold than I’ve seen for almost a decade.

Attendance at MIF was off the hook. The organizers ordered 700 lanyards (name badge holders) and ran out. And presenting companies saw buying directly after the event, including one that saw more than 1 million shares of trading on Monday that they attributed directly to their participation at MIF.

With a record crowd came new faces, which is just as important as positive interest from regular mining investors. Of course we want gold-oriented folks to be paying attention and buying stocks, but for this market to really gain momentum we need outside attention.

And it’s starting to show up. At MIF I chatted with half a dozen attendees who were new to the mining space but had come to the conference because they saw, broadly speaking, opportunity in gold and they had money from successful marijuana investing burning a hole in their pockets.

I can’t tell you how often in the last 3 or 4 years I’ve heard the comment: “If only some of those weed investors would rotate into mining, our lack-of-investment-capital problem would be gone!” And here they were, asking about how to invest in gold.

It’s hard for me to find new investment ideas at the Metals Investor Forum because I am kept so busy during the event that I don’t have time to learn about the companies I don’t know. Thankfully Beaver Creek provides precisely that opportunity.

Beaver Creek is speed dating for the mining space. Public companies, from explorers to single asset operators, are matched up with money, in the form of fund managers, analysts, letter writers, and bankers, for half hour meetings. The meeting schedule starts at 8am and runs to 6pm, with no breaks for coffee or lunch for the most requested companies or money sources.

It’s intense, but super useful. I went through the list of participating companies weeks before the event and requested meetings with all those I did not know well but saw some reason to be interested in, whether because of a quick peruse of their website or because others had mentioned the stock to me.

One of the challenges of this stage of a gold bull market is covering all your bases. You want to have producers, mid tier to major, for low risk leverage. You want a royalty company or two as well, for the same. You want single asset developers and operators, as the good ones will grow in value with the market and offer strong takeout potential. And you want exciting explorers.

It doesn’t end there. You want not exposure not only to gold but also to silver, and perhaps platinum and palladium. You need to actively broaden your scope from only seeking the best of the best – in terms of jurisdiction, project, and people – to considering a wider swath of options, as more than the very best will do well as this market heats up. And you need to be open to more business models: I tend to avoid quick to production stories, for example, but they do well in a rising market.

All of that combines to mean that I could have met with almost every company in Beaver Creek. But that just brings us to the other challenge: making decisions. I had 35 meetings over 2.5 days in Beaver Creek. Almost every company was interesting to some degree. The real work, then, comes after the conference, in sorting through everything I learned and making investment decisions. 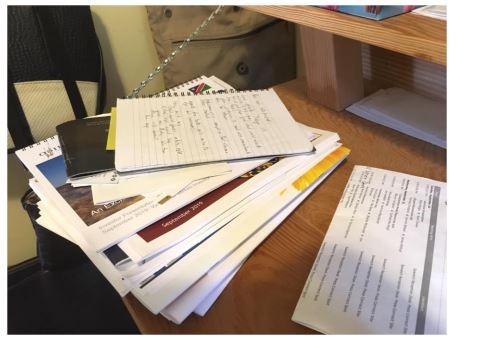 And if you can believe it, getting to all the meetings and then analyzing all the information is only half of the goal at Beaver Creek.

The other half is finding out what else people are working on. It’s finding out who’s putting together a nice new deal, or taking a private vehicle public, or looking for a pubco home for a nice project they’ve My postconference desk… 3 been holding onto for ages. These conversations aren’t part of the official schedule; they happen over coffee or beer or dinner.

And so the day isn’t done until you’ve attended a few receptions and a dinner, and worked the crowd in search of exciting new deals and financings. Getting in early is one of the best ways to limit risk, as it simply means a lower cost base. A new explorer with a single good asset likely comes out the gate with a market cap less than $4 million. Participating in that IPO financing can put you in a nice position as the group starts exploring and the market learns about the asset, a process that often boosts market valuations to two or three times that level (assuming it is a good deal, of course). 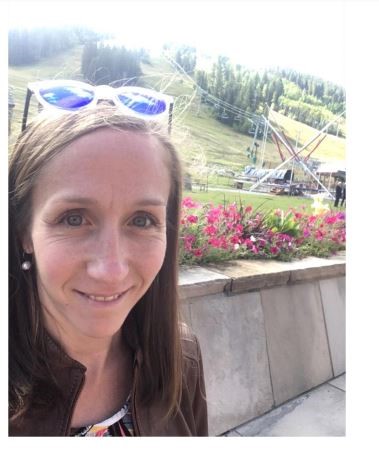 The ski hill of Beaver Creek is a gorgeous spot to spend a few days. I took most of my meetings outside!

Getting in early on great deals can mean earning fivefold or more, rather than the double you might get by buying once things are already in motion.\

I found several interesting deals on the sidelines at Beaver Creek. One is included in today’s letter: Scottie Resources (TSX-V: SCOT). It’s not a total sleeper but it’s raising money now to start really testing its land package, so it is still early.

Two others are still incubating, so I will convey those tales when the time is right.

In the meantime, expect several stock write-ups over the next while as I decide which of my 35 interesting meetings will turn into an investment.