GT Gold (TSX-V:GTT)  is pleased to announce results from the final four drill holes from its 15,000-metre Phase 2 exploration program at its 100% owned Tatogga property in northwest B.C. The drill holes were drilled at the Saddle South Au-Ag vein system and were the only holes drilled there in the 2019 campaign (Figures 1 – 4; Tables I and II).  All drill holes have now been reported from 2019 drilling at both the Saddle North Cu-Au porphyry system and at Saddle South.

Drill holes TTD135, TTD137, TTD139 and TTD140 (Figures 1, 2 and 3) were westerly inclined holes that were drilled obliquely across the general east-west trend of the western part of the westerly-plunging Saddle South mineralized vein field, from near the top of Saddle South ridge, close to where the 2017 discovery holes were drilled. The 2019 holes were drilled at high angles to the general trend of previously drilled Saddle South holes. The primary objective was to obtain oriented core data to better understand the controls on mineralization and to collect a representative metallurgical sample from the target.

The results from these holes help demonstrate the continuity and consistency of Au-Ag mineralization at Saddle South, and all four drill holes yield vein, dike and lithological data that will be critical to building geological and resource models for Saddle South. The drill holes also confirm the interpretation that the Saddle South mineralized zone represents a westerly-plunging vein field of sulphide-rich and local sulphosalt-bearing extensional veins and local vein-breccias. The mineralization delineated to date defines a near-surface zone of at least 500 metres strike length, over 100 metres width, and which can be traced to more than 500 metres below surface. The relatively well-constrained central and western parts of the Saddle South zone are part of the larger but less well-defined Saddle South system that strikes a further 600 to 700 metres eastward, for a total strike length of well over a kilometre.  The Saddle South zone remains open at depth, to the east, and to the west, where it appears to change to a southerly trend.

The new data collected in 2019 from this central part of the zone will provide the necessary control for construction of a preliminary geological model for Saddle South, once work on Saddle North has been completed. This in turn will guide future work toward defining a resource inventory and a plan to progress Saddle South to an initial resource estimate.

*Intervals are calculated using a 0.5 g/t Au cut-off, a maximum of three metres of internal dilution for vein-style mineralization, with no top cut applied. All intervals are reported as downhole drill widths and are expected to vary widely, and likely range between 20% and 70% of true width.

Drill hole TTD135 was drilled to the west-southwest at an azimuth of 245⁰ and an inclination of -45⁰ (Figures 2 and 3).  The intersections reported for this drill hole  excellent continuity of mineralization with adjacent drill holes and lie less than 100 metres from surface. Together with the soil geochemical results from this part of Saddle South, which commonly yield results exceeding 1 g/t Au, there is a strong suggestion that the system comes to surface.

The headline interval of this news release of 53.73 metres of 10.00 g/t Au and 46.84 g/t Ag is from drill hole TTD135.  It is dominated by a zone, approximately 12 metres in core length, of semi-massive to massive sulfide veining of either pyrite-dominant sphalerite carbonate quartz pyrite veins up to 1.5 metres in core length, or sphalerite- dominant pyrite carbonate quartz sphalerite veins that average 20 centimetres in core length. Colliform textures are common in these veins. Approximately 60% of this central zone is comprised of sulphide-rich veins, while the other 40% is comprised of sulphide-bearing siliceous breccia, with local wall-rock fragments. Surrounding the more sulphide-rich core are zones of thinner centimetre- and local millimetre-scale pyrite-dominant sphalerite quartz carbonate pyrite veins, typically sheeted, which account for approximately 15% of the core by volume.

Drill hole TTD137, an undercut of drill hole TTD135, was drilled to the west-southwest at an azimuth of 245⁰ and an inclination of -60⁰ (Figures 2 and 3). The results, with only local high grades, confirm that the vein system plunges westerly.

Drill hole TTD139 was drilled to the west-northwest at an azimuth of 300⁰ and an inclination of -45⁰ (Figures 2 and 4). Similar to TTD135, the intersections reported for this drill hole show excellent continuity of a very strongly mineralized system, from surface, where the soil geochemistry indicates that the system is exposed, down to depths of at least 100 metres, and remains open down plunge. These results, in combination with those from drill holes TTD135 and TTD140 define a well-mineralized central part of the Saddle South zone that is continuous from surface to at least a depth of 100 metres, across a width of at least 100 metres (Figures 2, 3 and 4).

“The results from the four Saddle South drill holes, which were drilled primarily to aid our understanding of the geometry of this near-surface gold-silver system, serve to remind of the optionality this target offers to the development strategy of the overall project, as well as to the significant exploration potential across the Tatogga property,” commented Paul Harbidge, CEO of GT Gold. 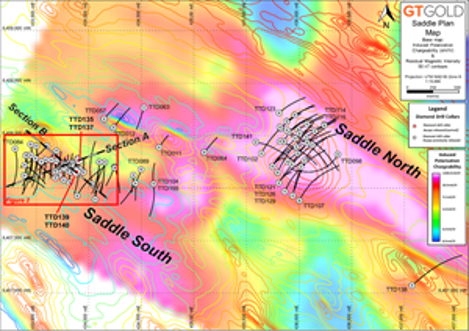 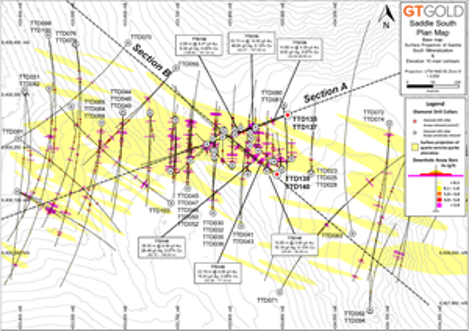 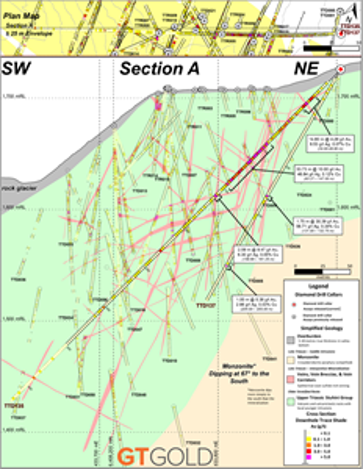 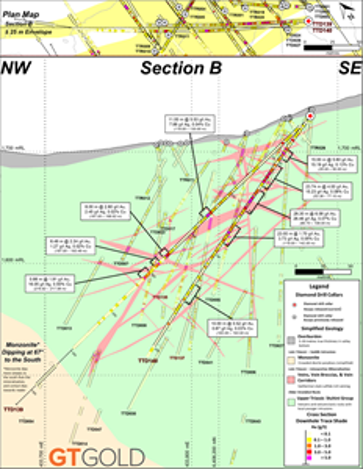 In 2017, GT Gold completed the first drilling on the Tatogga project by testing a gold-in-soil anomaly which resulted in the discovery of the Saddle South precious metal rich vein system. The vein system is hosted by hydrothermally-altered Klastline formation volcanic fragmental and volcaniclastic rocks of the Upper Triassic Stuhini Group and is cut by dikes, primarily of Late Triassic and Early Jurassic age. The vein zone is coincident with a well-defined Induced Polarization (IP) geophysical anomaly that is expressed as a moderate chargeability high and resistivity low.

The 2018 diamond drilling was designed to test the strike and depth extents of this mineralized system and a total of 36 drill holes for 16,587.22 metres were drilled. The results of this drill campaign further expanded and better-defined the well-mineralized west-northwest trend of gold-bearing and sulphide-rich veins and veinlets. The zone has a  strike length of over a kilometre in a steeply southerly-dipping system up to 150 metres wide that plunges westerly to depths of over 400 metres beneath the floor of the valley west of Saddle Ridge (40.89 metres at 9.55 g/t Au and 59.51 g/t Ag in TTD079).

A total of 25,146 metres were drilled in the combined Phase 1 and 2 programs on the Tatogga Property. For Saddle North, all 41 drill holes for 23,857 metres of drilling have now been reported, and for Saddle South all four drill holes for a total of 1,289 metres are reported herein.

As previously mentioned, the four Saddle South drill holes were drilled in order to obtain structural data for veins in the west-central part of the Saddle South system, as none of the drill core from the 2017 drill holes in that area was oriented. The primary rationale for collecting this data was to better understand the controls on mineralization, with a secondary goal of collecting a representative metallurgical sample along the west-northwest striking and westerly plunging system, which reaches surface in this area on the broad and gently-sloping top of Saddle ridge. In order to maximize the amount of data collected with a minimum number of drill holes, the holes were drilled to the northwest and to the southwest at moderate inclinations, both along and across the east-west trending Saddle South mineralizing system. The orientations of the drill holes were selected to maximize the number of mineralized vein intersections across the area with little oriented core.

GT Gold has initiated a comprehensive re-log of all the Saddle North core, which is in storage in southern B.C. The re-log is part of a thorough program designed to include study work that will ultimately progress Saddle North  through resource estimation and economic evaluation, with an initial goal of completing a  geological model for Saddle North by the end of the first quarter of 2020. Once the work on Saddle North is complete, a similar program will ensue for Saddle South with a core re-log analysis to generate a new geological model and a plan to progress Saddle South to a resource estimate. Furthermore, a dedicated exploration team is now integrating various datasets for the Saddle North area, for Quash-Pass, and for the greater property area to define drill targets for the 2020 field program.

GT Gold’s Tatogga Project lies in the northern part of northwest B.C.’s prolific Golden Triangle, with active mines such as the Red Chris Cu-Au mine, only 20 km to the southeast, the Brucejack Au-Ag mine, and past producers such as Eskay Creek, Silbak-Premier, Snip, Anyox, and Granduc, plus large-scale unexploited deposits such as KSM-Iron Cap, Snowfield and Red Mountain. The Tatogga property features district-scale exploration potential, with two recent discoveries, Saddle North and Saddle South, along with a third target, Quash Pass, which is close to being drill-ready. All the targets are close to infrastructure, with Highway 37 and grid power running up the east side of the property to the Red Chris mine and the nearby village of Iskut.

GT Gold has implemented a rigorous quality assurance / quality control (QA/QC) program to ensure best practices in sampling and analysis of diamond drill core, the details of which can be viewed on the Company’s website at http://www.gtgoldcorp.ca/projects/tatogga/. All assays are performed by ALS Global Ltd., with sample preparation carried out at the ALS facility in Terrace, BC, and assays determined mainly at the North Vancouver laboratory. For gold, fire assays are performed as per ALS method Au-AA26 (0.01- 100 g/t Au) using 50 grams of sample measured by atomic absorption. Assays equal to or greater than 100 g/t Au are reanalyzed gravimetrically by method Au-GRA22. Silver and copper are analyzed by ALS method ME-MS61 with a 4-acid digestion followed by ICP-MS analysis. Assays greater than 100 ppm silver or 1% copper are reanalyzed by ICP-AES by method OG-62.

GT Gold is focused on exploring for base and precious metals in the geologically fertile terrain of British Columbia’s renowned Golden Triangle. The Company’s flagship asset is the wholly-owned, 46,827 hectare Tatogga property, located near Iskut, BC, upon which it achieved two significant discoveries in 2017 and 2018 at its Saddle prospect: a near surface bulk-tonnage and potential deep high-grade underground-style epithermal gold-silver vein system at Saddle South and, close by at Saddle North, a large-scale, richly mineralized porphyry gold-copper-silver intrusion.

*Intervals are calculated using a 0.5 g/t Au, a maximum of three metres of internal dilution for vein-style mineralization, with no top cut is applied. All intervals are reported as drill widths and are expected to between 50% and 90% of true width.