James Anderson, Chairman & CEO said, “Our geological teams are rapidly advancing our understanding of the large volume of mineralized material that remains accessible and available to be mined at Valenciana. With over 400-years of mining history, Valenciana is poised to begin a new chapter of growth, development, and expansion along one of the world’s most productive silver producing geological structures – the Veta Madre.”

The examination of historical high-grade drill results in the mine database along with consultation of the previous mining and geology staff has revealed several priority areas within VMC that offer the promise of significant high-grade tonnage including a deeper zone within the Valenciana Mine proper. Drilling between 2012 and 2021 (shown below) has indicated a consistent, well mineralized, unmined area with intercepts of both vein and strata-bound mineralization. Additional areas throughout the mine have been identified and will be more fully reviewed for potential future production.

The following selective historical drillhole results are all within one segment of the Valenciana Mines Complex. 1 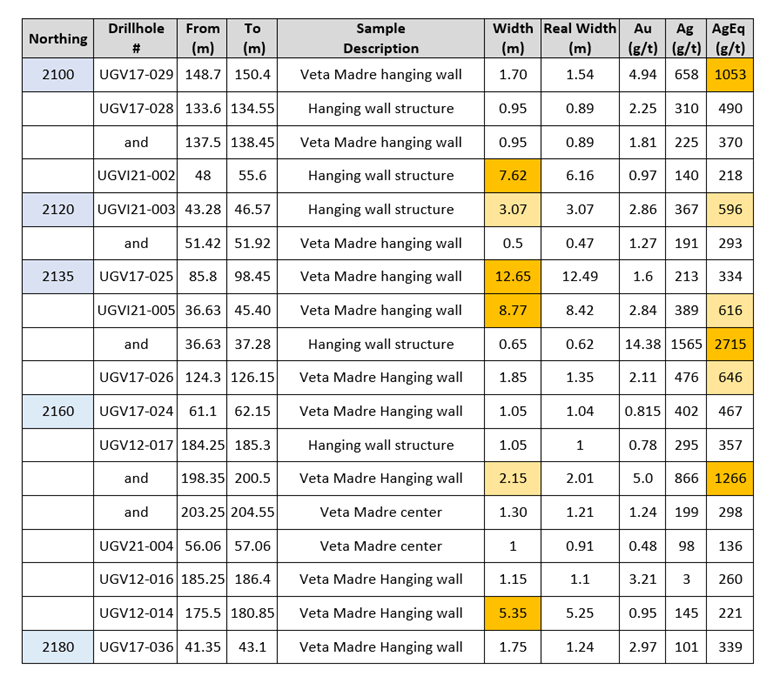 These results are historical in nature. GSilver’s qualified person has not done sufficient work to verify the sampling, analytical, testing and QC/QA procedures underlying these results to opine on their adequacy and accordingly such results should not be relied upon. They are presented to provide an indication of the potential extent of the silver and gold mineralization within this selective area of the Valenciana mine and as a guide to future exploration, development and mining.

Additionally, prepared production stopes already exist at VMC; most notably, the Los Pozos mine has several mineralized blocks that have been defined, organized and are ready for the initiation of cut & fill mining. These areas were previously scheduled for extraction but remain available because of Valenciana being put on care & maintenance in late 2021, solely due to a lack of tailing space. The Company anticipates that mining will recommence at VMC before the end of 2022, with mineralized material being sent to El Cubo for processing.

GSilver is a precious metals producer engaged in reactivating past producing silver and gold mines near the city of Guanajuato, Mexico, which has an established 480-year mining history. With five mines and three processing facilities, the Company is one of the fastest growing silver producers in Mexico.