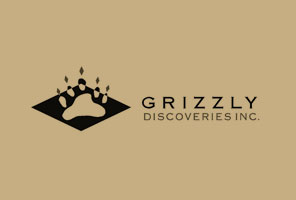 Grizzly Discoveries Inc. (TSX VENTURE:GZD)(OTCQX:GZDIF)(FRANKFURT:G6H) is pleased to report that it has received a new independent technical report on its Greenwood Project, located in southeastern British Columbia. The independent technical report was completed by Michael B. Dufresne of Apex Geoscience Ltd. of Edmonton, Alberta and has been prepared in compliance with NI 43-101. The Report will be filed on SEDAR within 45 days.

The Company is evaluating the recommendations in the Report in order to select the targets and scope of work for a future focused exploration program at the Greenwood Project, which will be subject to financing.

Brian Testo, President and CEO of Grizzly, stated “We are pleased to receive this technical report documenting our initial prospect identification and follow-up drilling. Since acquiring the property in 2008, we have been successful in the discovery of eight prospect areas containing precious and base metals mineralization. All of them are recommended for further work, with three of them selected for priority attention. We are now evaluating these recommendations to narrow the focus to the area or areas recommended for further work that most closely aligns with the Company’s goal of defining a maiden mineral resource estimate at the Greenwood Project in the near to medium term.”

Grizzly is a diversified Canadian mineral exploration company with its primary listing on the TSX Venture Exchange with 48.7 million shares issued, focused on developing significant Potash assets in Alberta and its precious metals properties in southeastern British Columbia. The Company holds, or has an interest in: metallic and industrial mineral permits for potash totaling more than 900,000 acres along the Alberta-Saskatchewan border; over 235,000 acres of precious-base metal properties in British Columbia; and more than 600,000 acres in properties which host diamondiferous kimberlites in the Buffalo Head Hills and Birch Mountains of Alberta.